Why Australia’s a fortunate country

Just take a look at what is happening to commodity exports...

A fortunate country. If you are foolish enough to take notice of what politicians talk about and political journalists write about you might think that Australia faces some kind of economic crisis.

Then you read the June quarter Australian Bureau of Agricultural and Reserve Economics and Sciences (ABARES) commodities forecast and you are reminded just how fortunate we are compared with most of the rest of the developed world.

Just take a look at what is happening to commodity exports: 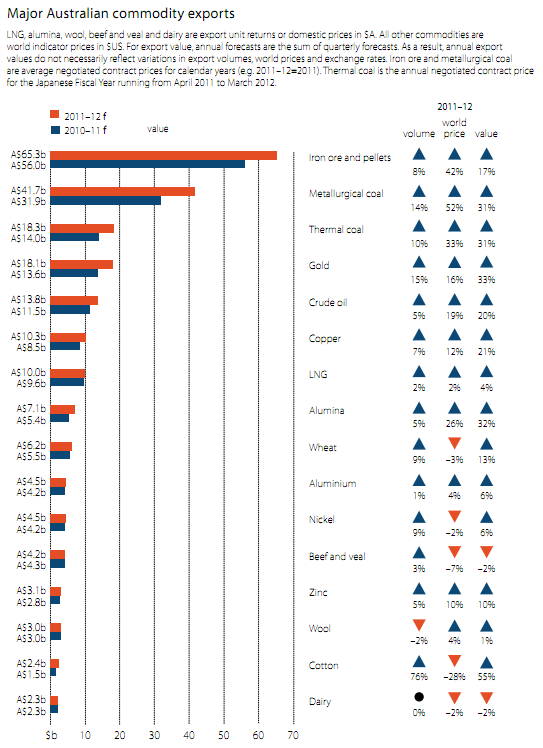 Hop in to a hammock. There is an alternative to listening to proceedings from the federal parliament if you want to take a short afternoon nap. Hope into a hammock.

Swiss scientists have just proved that a gentle swinging motion sends you to sleep quicker and makes the sleep deeper. The findings that “Rocking synchronizes brain waves during a short nap” are in the latest issue of the journal Current Biology.

The sound of law and order. From the BBC: Sir Peter Maxwell Davies, Master of the Queen’s Music, has called for people who use mobile phones during performances to be fined.

“I would just love to see something where people would be fined … and that the money went to the Musicians’ Benevolent Fund.”

Believing in the big bang theory. There’s a new Miss USA and she’s not blonde and she was one of only 51 contestants to unequivocally support teaching evolution. According to the newly crowned Miss Alyssa Campanella, 21, of LA:

“I was taught evolution in high school. I do believe in it. I’m a huge science geek … I like to believe in the big bang theory and, you know, the evolution of humans throughout time.”

Some examples of the majority view on the evolution question: A Chinese myth? I must have read it hundreds of times over the last few years: the United States government is dependent on the Chinese keeping on buying its Treasury bills to prop up its profligate spending.

Hence my puzzlement on looking at US government interest rates after reading in London’s Financial Times how China this year has been turning away from the US$ “in earnest”.

According to estimates by Standard Chartered Bank, China’s foreign exchange reserves expanded by around $200bn in the first four months of the year, with three-quarters of the new inflow invested abroad in non-US dollar assets. Yet, as the graph from Yahoo Finance shows, yields on Treasury bonds are lower today than they were at the start of the year!

In response to the issue of China reducing its exposure to US debt, it’s been true for quite a while that the biggest holder of US govt debt is actually the US Federal Reserve.

Wot Jaywhar said – why do you think the printing presses are approaching meltdown due to QE2 or is 3 or 4? Not even taking in each others laundry but doing it oneself and paying for it with hot air.