The death of competition? Grave concerns over ACCC tick to funeral giant

Family funeral homes are concerned they might be in the gun, after the ACCC allowed local firm InvoCare to acquire one of its competitors, Bledisloe Group.

In art, the Fishers beat back the raid to maintain control of their business. In life (and death), and now in Australia, family funeral homes are concerned they might soon be in the gun, after the competition watchdog gave the green light for local firm InvoCare to acquire one of its competitors, Bledisloe Group.

The $890 million funeral industry employed 7,615 people as of last year. But this latest move has left at least one funeral director miffed — Mark Allison, a director of the John Allison/Monkhouse funeral group, says the growth of InvoCare may lead to less of a personalised service for clients.

A sixth generation funeral director, his family has been in the memorial business for over a century.

“I think that many families would be unaware of the significant market control one listed corporate has, owning a number of household names in the funeral sector,” he told Crikey. “And the question is for families: do they really want their loved ones life to be remembered by the stock exchange?”

In November last year, InvoCare made a $114 million play to acquire one its largest competitors Bledisloe Group. Bledisloe operates 52 homes in Australia and New Zealand, as well as three cemeteries and crematoria in Queensland. At the time InvoCare said the deal would increase its overall funeral market share by 4% to 26%.

In an attempt to allay any concerns over reduced competition, the deal was put before the ACCC — who ultimately found after a seven month review that they would green light the deal.

Allison is particularly concerned by the significant market share InvoCare could have in Sydney — he suggested in a submission to the ACCC inquiry that the giant could claim as much as 83% of the market in some areas.

The consumer watchdog has noted such concerns. In their requirements they have ordered InvoCare to sell the Gregory and Carr funeral directing service brand in northern Sydney, as well as the Great Northern Garden of Remembrance crematorium in Brisbane’s Deception Bay. The company must also make clear when advertising in Brisbane which brands belong to it.

James Macleod, managing director of Tobin Brothers, isn’t as concerned as Mark Allison. While he says the InvoCare acquisition will signal a “new day” for the funeral industry, he thinks family-owned businesses will continue to thrive.

“I think there’ll always be room for smaller companies, because I think that there are a number of choices that client families have,” he told Crikey. “They can go with a big multinational company or they can choose the smaller firms. I think that there is plenty of choice out there and that can only benefit our customers.”

Karl Wolfenden, a spokesman for InvoCare, says the length of the ACCC review demonstrates the robustness of its investigation. He says the concerns of smaller operators were taken into consideration by the watchdog when handing down its finding.

“A lot of this stemmed from submissions from independent operators,” he told Crikey. “As a result, the ACCC’s processes — while we don’t agree with their concerns — certainly acknowledged the concerns of local operators.”

According to their website, InvoCare conduct 30,000 funerals a year — a figure which amounts to more than 20% of Australia’s total of around 140,000.

They are the only funeral company listed on the stock exchange and, with 178 funeral homes and 12 cemeteries and crematoria nationally (as well as interests in Singapore), they are far and away the largest operator in the local funeral industry. 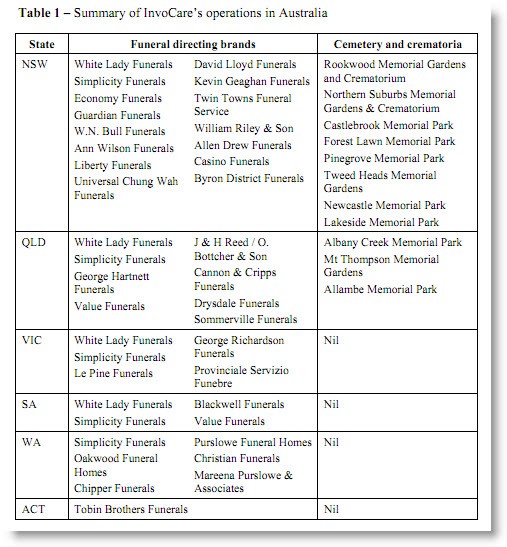 It’s not the first time an InvoCare acquisition has drawn the attention of the ACCC. The consumer watchdog has investigated and approved a number of its purchases in the last two years — including that of W.N Bull Funerals in NSW, Liberty Funerals in NSW and Chipper in WA.

Wolfenden says a recent industry report by market research company IBISWorld paints a picture of a funeral industry offering strong competition. He also says his company strives to offer choice for all its client families.

“With factors such as the aging population and low barriers to entry, competition from independent funeral homes is expected to grow as more operators enter the market,” he said.

But Allison says the latest acquisition from InvoCare reflects the overall corporatisation of the Australian funeral industry.

He thinks this is the legacy of two former local US-based operators, Service Corporation International and Stewarts Enterprises, who established themselves here before selling off in the early 2000s.

“There was some corporatisation before the American companies came but I think they accelerated the process,” he said. “When it comes to such a uniquely personal experience why deal with a large corporation? Why not simply turn to family company to care for your family?”

The tech slog is on: slowly but surely, the walls are closing in on big tech

Each small step towards regulation makes possible a future that seemed unimaginable just a year ago.

Not happy, Jan? How the shift to online has changed the economics of advertising.

Crikey! I was contemplating using White Lady Funerals if I ever needed a funeral director but will now reconsider.

I don’t know how true it is, but many claim that funerals are needlessly expensive because because there is no effective price competition in the business.