Peter Reith may be the answer, but what’s the question?

If you ever wanted a demonstration of the chaotic nature of the Liberal Party's factional landscape, the fight for the federal presidency should do it.

The Liberal Party’s federal council meets this weekend with the party, superficially at least, in good shape: in government in three states and well ahead in the polls in the others as well as federally. But its attention is being diverted by the unusual spectacle of a contest for the federal presidency, with incumbent (and former Victorian treasurer) Alan Stockdale being challenged by former Howard government minister Peter Reith.

If you ever wanted a demonstration of the chaotic nature of the Liberal Party’s factional landscape, this should do it. Broadly speaking, Reith is being backed by the left and Stockdale by the right, but several figures from the right are behind Reith, including Alexander Downer (who once harboured unlikely ambitions for the job) and, according to reports, John Howard himself.

It’s complicated by the fact that both candidates are from Victoria, which for a long time has failed to conform to the national pattern; Reith is identified with the group that supports premier Ted Baillieu (which these days thinks of itself as “left”, although its origins are complex), while Stockdale has long had a wary but generally supportive relationship with the opposing Kroger-Costello group.

So what is the contest actually about? According to Amanda Vanstone, publicly endorsing Reith in the Fairfax papers this morning, it’s all about change. She says the party “needs revitalising, just as any other organisation does”, and has to meet rising expectations and stop ignoring its membership.

Some of this could easily have been lifted from a John Faulkner speech, just changing a few names, but as a diagnosis of the party’s problems it’s pretty good. And in a way it’s needed most when the party is doing well electorally, because on past performance victory will put paid to any talk of internal reform (just as it did in the ALP), leaving fundamental problems unaddressed.

But Vanstone leaves the reader puzzled as to just why Reith should be the one to take on these problems or just what he would do about them.

It’s hinted that he would work harder than Stockdale, but there’s no suggestion that he believes anything different or would adopt a different set of remedies.

On the surface, the idea of Reith as an agent of change is a bit odd. He made a very traditional career in the Liberal Party, was a loyal supporter of Howard’s leadership and retired at age 51 to work as a lobbyist. But he’s always been known for a slightly unconventional streak, and is a tireless self-publicist — a two-edged sword when it comes to the presidency, whose occupant is supposed to stay in the shadows behind the leader.

Reith is known to suppor such reforms as membership plebiscites for preselection and greater organisational participation in policy, but these are the sort of changes that Stockdale is already identified with, having helped to shepherd through the Victorian division. (They’re also largely the things that have been tried and failed in the ALP.)

It’s not obvious that Reith’s bull-at-a-gate approach will be any more successful than Stockdale’s quieter style in bringing about change. And there’s a real incongruity in the spectacle of two prominent ex-parliamentarians competing as to who can best break the parliamentarians’ stranglehold on the party.

Indeed there’s a more general moral here: one of the things that makes the Liberal Party’s infighting so nasty is precisely that the contestants are so similar. They’re fighting for a narrow patch of territory with very little to differentiate them: if they talk about policy they say pretty much the same things, so they’re quickly reduced to talking about personalities instead.

I hold no brief for either candidate; I confess to having a good deal more personal respect for Stockdale, but I’m quite open to the idea that maybe Peter Reith will be the answer to the Liberal Party’s problems.

The party might be better off, however, if it first spent some time working out just what the question is. 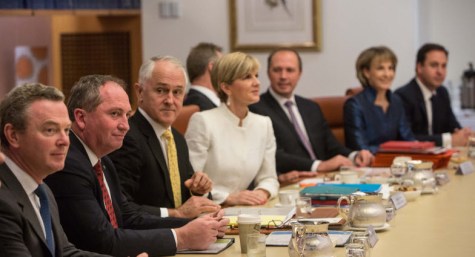 Where Former Cabinet Ministers Work In The Private Sector

Really, thinking on it (with the policies of Abbott and Scott “Reith-Morrison”) what “grater” personification of all they stand for, can the “Party of Howard” have, into it’s second skin, than “Reith – Hero of Children Overboard/SIEV 4”?
“Leery Plotter and the Chamber of Secrets”?

Seems to me that Klewso has been smoking too much KRONIC.

If they get Reith, we get Workchoices, Mark II. And a whole lot of other nasty unfinished business from the Howard era. As if bleedin’ Abbott isn’t bad enough!