They must be chuckling at Liberal Party headquarters over the success of their "Lemon, Lime and Bitter" so-called advertisement.

Advertisements you don’t pay for. They must be chuckling at Liberal Party headquarters over the success of their “Lemon, Lime and Bitter” so-called advertisement. It featured everywhere on prime time television and they didn’t have to pay a cent to have it shown. 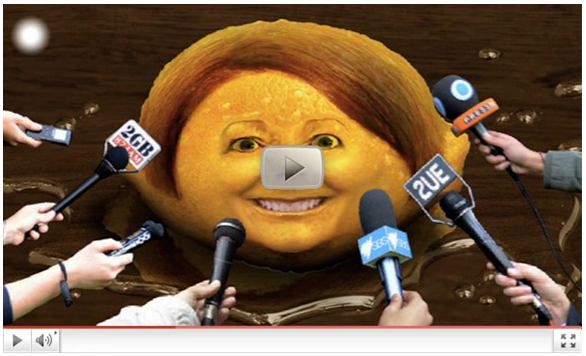 Memories of John and Andrew. Eventually one of them will retire from Parliament and the contest will be over. Until then we will keep getting stories of Kevin versus Julia in competition for the top job. Just like it used to be last century within the Liberal Party when John Howard and Andrew Peacock kept jostling for the leadership.

That went on for years with the frustration of their party members at the destabilising effect of it all being just the same as we now hear from within Labor ranks about Kevin Rudd being promoted by the media as a challenger to Prime Minister Gillard.

More of those anonymous sources. The feature of most of this Kevin as the comeback kid reporting is that readers are set a guessing game to try and work out who — if anybody — really said what.

It is a kind of no names no pack drill kind of journalism and I particularly liked Phillip Coorey’s version when writing about the cancellation of the planned assassination party.

Suggestions please as to who the Sydney Morning Herald scribe could have been referring to with these comments:

Mr Rudd had invited former and present staff – but it’s believed not very many were attending.

One guest who declined the invitation said they thought this was more the reason for the postponement.

Some former staff are interstate or overseas and others were angry at comments Mr Rudd made in an interview with the Herald on Saturday in which he said he should have surrounded himself with a few more experienced staff, or ”greybeards”.

And who is behind these disguises from the Sydney Sun Herald?:

An MP who has long been hostile to Mr Rudd said …

Participatory democracy. Fortunately politicians don’t worry much about being consistent when it comes to principles. Otherwise the Liberals might live to regret their stunt in calling for a national plebiscite to determine public opinion on a carbon tax.

If it is good enough for the people to have a say on this issue then why not let them decide whether euthanasia should be legalised or the death penalty reintroduced?

Greek confusion. A handy little guide on the BBC website this morning as to who Greece owes what. It helps make sense of France’s determination that another bail-out of Greece does not involve banks having to take the so-called “hair cut” involved in pricing loans at what they are now worth on the market rather than their book value!

Not that even the temporary solution to Greece’s financial problems now being considered by EU finance ministers is assured of success. At a weekend meeting they decided to postpone a final decision until after the Greek Parliament votes on new austerity measures that the EU and the International Monetary Fund are demanding.

To be fair to France, Christine Lagarde is on record as saying that Goldman Sachs should be seriously examined for any legal responsibility for their advice and schemes for hiding Greece’s total debt. (Lagarde is Sarkozy’s Finance Minister and likely next head of the IMF.)

Having said that, it is truly shocking that France allowed such a huge amount of borrowing by such a third tier country. When I first went to France they were so controlling about debt –there were strict limits on the amount that French citizens were allowed to take overseas! Credit cards were strictly usable only in France until sometime in the 80s. They still have tight control on personal borrowing, eg. for mortgages (which makes a lot of sense). They were always disdainful of Anglo-Saxon financial habits, and they had a point. Now they have allowed their own banks to run up these absurd loans to a country like Greece that so obviously has no easy means of repaying them. What other dodgy loans do they have on the books?