Maybe silence is best, mulled Crikey's Richard Farmer on The Stump over the weekend, as the Prime Minister, along with the rest of the nation, awoke to this set of headlines...

Maybe silence is best, mulled Crikey’s Richard Farmer on The Stump over the weekend, as the Prime Minister, along with the rest of the nation, awoke to this set of headlines: 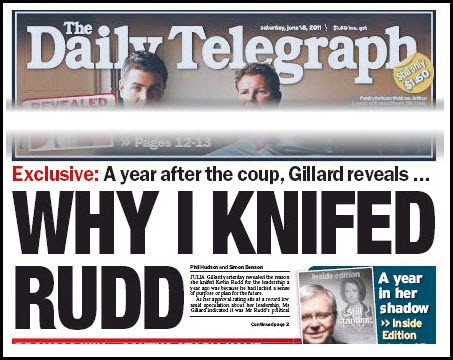 These headlines must be especially unpalatable to the PM given a study conducted by Poynter.org revealing how few people actually read articles:

“Graphics, photographs and headlines get far more attention from readers than text does. Readers take in 80% of the artwork and 75% of the photographs in the paper. They see 56% of the headlines. But they are aware of only 25% of the text, and read just a portion of that. Only about 13% of the stories in the paper are read in any depth – that is, at least half-read. And that’s under the best of circumstances: These test subjects, frequent newspaper readers, were uninterrupted, supervised, and given prototypes with well-written, compelling stories.”

Readers consume what they see, not what they read. And thus, it’s about boiling it down to the simplest of messages. Just ask B Loughnane, who’s taken that approach to new heights with the Liberal party ads that reduce our politicians to pieces of fruit — the latest incarnation stars Bob Brown as a lime. Who says politics is being progressively dumbed down?

This is so depressing. We’re treated like clueless dupes.

We’re treated as we deserve, from what I see, Perry.

I wish that weren’t so, but it does seem that way.