CUA has already merged with two Victorian-based credit unions without a hitch. But its next target -- Maleny Credit Union (MCU) in Queensland -- has all the hallmarks of a bruising battle, says John Addis, Crikey director and founder of Intelligent Investor.

Egged on by Treasurer Wayne Swan, Credit Union Australia (CUA) is making a big push to become the fifth pillar in Australian banking, with struggling credit unions a prime target for expansion.

CUA has already merged with two Victorian-based credit unions without a hitch. But its next target — Maleny Credit Union (MCU) in Queensland — has all the hallmarks of a bruising battle.

Anyone that followed Woolworths’ long struggle to plonk a supermarket next to a platypus habitat won’t be surprised at the strength of local opposition, although this is a very different campaign.

Whereas Woolies was a giant corporation riding into a town dependent on small retailers, this is a fight between a board and some of the members it represents.

Anti-merger protesters have posted a YouTube video, are organising through Facebook and are currently attempting to mail MCU members with the case for a “no” vote, although their efforts have yet to produce much success. 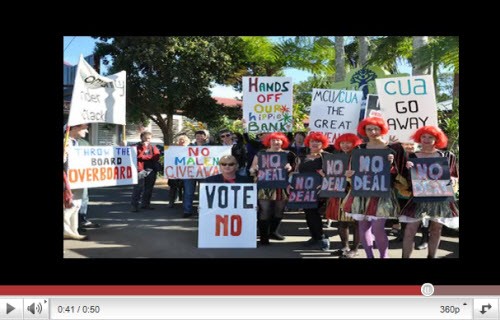 Last Monday Jan Duffield, while helping to man an information stall outside MCU, was asked by the local police to move on. Later, officials from the local council turned up.

Meanwhile Crikey understands that while the MCU advertises the benefits of the merger in the local paper each week, the letter the Friends of Maleny Credit Union wishes to mail to all members arguing against the merger has come back from the MCU’s solicitor about 10 times.

The board’s argument is that MCU suffers from a weakening capital position and growing compliance, governance and management costs, hence the need for a merger. But MCU’s previous annual reports make no reference to these burdens.

A year later net profit was up 18% and MCU found the money to renovate its premises, introduce a new computer system and open a sub-branch in Woodford. It also grew membership by 13% and started a new financial services division. It doesn’t sound like a struggling business.

So why the need for a merger?

Well, this isn’t really a merger at all. The information document accompanying the special general meeting notice calls it a “proposed transfer of business.” That’s a more accurate description. CUA takes over a $47 million loan book and a building in the centre of town that’s valued at about $1.3 million.

And how much is CUA paying for these assets? Zippo. As a CUA spokesperson said, “CUA today is an amalgamation of over 160 mergers dating back to the 1940s. Each and every one of those transactions has been a transfer of business.”

In an interview with The Hinterland Times MCU CEO Greg Stevens says that, “There is no suggestion that MCU cannot sustain itself as a credit union.” But he goes on to explain that “the board was of the unanimous view that there was not a sustainable financial future for MCU Ltd that would provide reasonable and competitive benefits to its members”.

That qualification regarding benefits to members is absent from the message that clients see when they log in to the MCU website.

But it seems the hostility to the deal is not isolated to some irate members.

Lynne Frederiksen, an MCU board member of eight years, resigned last week saying, “In recent times it has been increasingly difficult for me to perform my role as director effectively in light of the changing direction of MCU without compromising my own values and ethics … the proposed merger and means to implement it, do not agree with my philosophy of what the Maleny Credit Union used to stand for.”

In a letter to the editor of The Range News Maleny, Frederiksen wrote: “Some of the actions that MCU has taken against the members who have expressed disagreement with the proposed merger, led me to my decision to resign from the board.”

Stephen Alexander, one of the organisers of the “no” campaign believes the tide is turning. “When we started, I’d say 60% of members were in favour of the merger and 40% against. Now I’d guess those figures have reversed.”

Greg Stevens takes the opposing view: “There is certainly a strong sentiment in favour of the merger and we are confident that the majority of our members will vote ‘for’ the merger.”

The special general meeting takes place on June 25, with 75% of members required to vote “yes” for the merger to proceed. It should be an interesting meeting.

*Disclosure: John Addis has a mortgage with CUA.

Bartholomeusz: the risks in Swan’s reforms

I am a director of a credit union, although not MUA or CUA. From my perspective, the article leaves out some important information, without which it is not possible to judge whether the merger is a sensible proposition.

It is very difficult (in most cases, impossible) for a credit union to raise capital, apart from the profits it makes in the normal course of business. However, it is a statutory requirement (as well as financially prudent) that all credit unions (and banks, and any financial institution that takes deposits) maintain a certain level of capital relative to assets (called capital adequacy – the formula takes into account risk-weighting of assets as well). If assets grow rapidly (as have MUA’s – 21% is very rapid growth), a very high level of profit is required to maintain capital adequacy at a given level. The key question is how much profit MUA is making (relative to assets), not whether the profit has increased in the last year or two. This will determine whether such high growth is financially sustainable.

Second, from the loan book figure given, I would guess the assets MUA are of order $50 to 60 million, which makes it a relatively small credit union. The costs of compliance are high, as are IT costs. I can understand why a credit union of this size is having trouble coping with these costs, although they may not be prohibitive.

Finally, credit union directors, like all directors, are required to act in the best interests of shareholders (in the case of a mutual organisation, like a credit union, these are the members). I have no doubt the MUA directors would be fully aware of this responsibility. The question they would have had to answer when CUA made the merger proposal was whether it was in the best interests of the members. This would involve considering questions of interest rates, service, long-term sustainability, etc. Clearly it is possible to come to different conclusions depending on one’s view of the relative importance of these factors. However, without the information I have referred to above, it is not possible to make an informed decision.

I agree that the directors have provided sufficient information for anyone to make an informed decision. Indeed the majority of members who live outside of Maleny will get the first opportunity as shareholders to ask these questions directly some 48 hours after their proxy votes have to be delivered.

In light of this how would your board respond to the following:

Would your CU make the decision after one normal board session?
Could they collect all the required information in the space of 3 weeks?
Could they review and talk to all potential merger partners in 3 weeks?
Would they seek external expert advice?
Would they have a proper options paper that could be released to members to back
their decision?
Would they canvas member opinion before deciding?
Would they do some form of Social Impact study before deciding?

If not would it not be wise to say No to the vote so as to establish these issues , make all the information and options available and the shareholders and vote again. After all the CEO of the MCU paid for a statement in the local press saying that the MCU is sustainable as a local business but not the big expansion plans across the Sunshine Coast

Sorry, should have read “have not provided sufficient information”