Crikey can reveal that while Gina Rinehart paid for Barnaby Joyce and deputy opposition leader Julie Bishop to travel to nuptials in India, Joyce used his overseas parliamentary study entitlement for the return leg from Kuala Lumpur.

Renegade Nationals Senator Barnaby Joyce tapped the taxpayer for $2,000 last week to attend the lavish wedding of a granddaughter of an Indian billionaire engaged in delicate negotiations with iron ore matriarch Gina Rinehart to buy two of her Queensland assets.

Crikey can reveal that while Rinehart paid for Joyce and deputy opposition leader Julie Bishop to travel to the abundant nuptials, Joyce used his overseas parliamentary study entitlement for the return leg from Kuala Lumpur.

The Fairfax press reported this morning that the two Tory MPs whooped it up at the celebrations last weekend for Mallika Reddy and her new hubby, Indu Group scion Siddharth, on the arm of Rinehart in Hyderabad. Mallika’s granddad is wealthy industrialist GV Krishna, who according to Forbes India is worth over a billion dollars.

Senator Joyce told The Age he’d enjoyed a brief encounter with a Bollywood actor he described as ”India’s Brad Pitt” adding, ”I must admit it was absolutely mind-blowing.”

The two senior MPs were on hand to lend cachet to Rinehart’s standing, as GV wavers on the terms of a $2 billion deal to buy Hancock Coal’s Queensland assets Tad’s Corner and Kevan’s Corner.

A Joyce spokesperson would not give the exact amount of the impost, but according to numerous airline price comparison sites, the average cost of a business class fare from KL to Sydney is over $2,000.

In addition to the wedding, the Nationals Senator also met with GVK officials in India and regional trade representatives in Malaysia. The engagements were tacked on after Joyce received the initial invite from Rinehart, the spokesperson said.

Federal parliamentarians with over three years service are eligible for one overseas study trip in each parliament, with costs capped at two first class around-the-world airfares for the MP and their spouse. Joyce will need to lodge a report on the trip with Special Minister of State Gary Gray in the next 30 days.

The use of the perk means Joyce will have to pay for future trips out of his own pocket until the next federal election in 2013.

Joyce’s Hyderabad host came in at number 64 on the Forbes India rich last year with a personal fortune of $US1.08 billion, however he has since slipped off the magazine’s global billionaire’s list.

“The bride and groom, resplendent in their designerwear – Mallika in a gold sari and Siddharth in an embroidered sherwani – were at the centre of one of the biggest and fattest weddings in the past few months. Of course, the glitterati were still there in full force.” 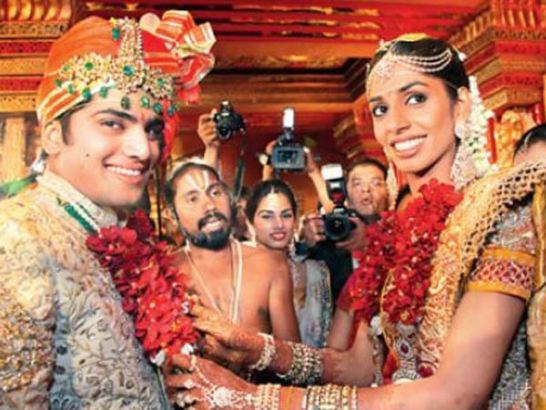 Public sector governance expert Stephen Bartos told Crikey that the legitimacy of the trip would “depend whether there’s any real conflict of interest. These things have to be declared in any case. If it was hidden that would be a real problem. But provided politicians declare there’s no wrongdoing.”

“It’s a little bit different for backbenchers. If Julie Bishop or Barnaby Joyce aspire to be ministers one day, then the question is, is there anything involved with this that might come back to haunt them?

“The number of journalists that take trips around the world far exceeds that of politicians. It’s actually a bit rich for the media to get stuck in while ignoring the beam in their own eye.

“If there was any possibility that this would be a deal that would require regulatory approval by the parliament that would be a problem,” citing the recent nixed ASX takeover that required legislative changes.

A spokesperson for Julie Bishop could not be reached before deadline.

So Julie Bishop was the sacred cow and Barnaby did the stand up.

I can just see it now. “Indians eh, you mob aren’t Indians where are your feathers and war paint”?
(cue death stare from cow)
ROFL.

Now we see why Kevin Rudd’s proposed new mining tax was sooo unfair on these struggling mine owners.

What with cuddly Clive Palmer giving out 50 gleaming Mercs last Christmas and Gina’s largesse they really do need every penny just to survive.

Dare I say it? Julie Bishop has no problem (she says) with the expression, so here goes:

Have these two Coalition pollies been “pussy whipped” by Gina Rinehart?

The miners private jets are getting a workout; Naura India, Marlboro Country, all tax deductible too.

“Like a Rinehart Cowboy” – “Gettin cards and letters from people I don’t even know…”?

“Cousin Jethro’s” acted as little more than a lobbyist for “the miner parties” for years – one reason he’s so “open minded and sceptical at the same time”, he sold it to “real” primate change scientists, years ago?