A European version of the Lehman Bros collapse

That is the rather frightening prospect raised overnight by the head of the eurozone.

A European version of the Lehman Bros collapse. That is the rather frightening prospect raised overnight by the head of the eurozone, Jean-Claude Juncker, prime minister of Luxembourg.

The Guardian reports that Juncker believes that imposing losses on investors in Greek bonds, as Germany is demanding, could trigger a European version of the Lehman Brothers bank collapse — a so-called “credit event”.

“It’s a really ugly situation. The [German] idea is dangerous. It could provoke the gravest risk, that all three rating agencies declare a credit event and then there are big contagion risks for other countries.”

A simple guide to the Greek crisis. The London Daily Telegraph’s Edmund Conway has made a better fist of it than I could of explaining what is at stake in this crisis. Well worth a read as we grapple with understanding what is happening as Europe faces another financial crisis.

For those interested in a more detailed explanation, see the suggested readings posted on Crikey’s The Stump website.

A bit of bank bashing. While Europeans start worrying about another collapse of their whole financial system, back here the Coalition MP Warren Entsch is going in for a little more parochial kind of bank bashing.

Yesterday in the House of Representatives  rose on the adjournment “to raise serious concerns about what I see as unconscionable gouging practices by the big banks in my electorate.”

The problem as the Chief Government Whip sees it is that the banks are punishing businesses already punished by cyclone and a rising Aussie dollar by lowering debt to equity ratios and then charging punitive penalty interest rates when business cannot comply.

I doubt that the banks will be taking any notice of Mr Entsch’s please but at least his local paper The Cairns Post has: 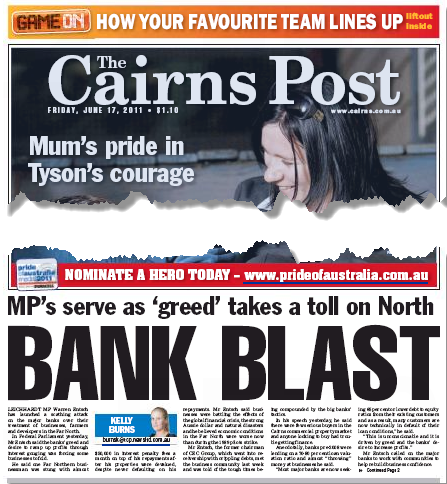 And that headline, I guess, was the point of it all — a local MP seen to be acting in the interests of his local constituents.

Don’t knock that Facebook. Perhaps I’d better start really using that Facebook site of mine. Research out in the United States suggests that Facebook users, who are much more politically engaged than most people, get more social support than other people. Then again, perhaps I should turn to MySpace where users are more likely to be open to opposing points of view.

A survey of social networking sites (SNS) like Facebook, LinkedIn, MySpace, and Twitter that explores people’s overall social networks and how use of these technologies is related to trust, tolerance, social support, and community and political engagement was conducted by the Pew Research Center’s Internet & American Life Project.

At least I no longer need feel that I am too old to participate in these SNS things. Pew finds that the number of those using social networking sites has nearly doubled since 2008 and the population of SNS users has gotten older. In the Pew internet sample,  79% of American adults said they used the internet and nearly half of adults (47%), or 59% of internet users, say they use at least one of SNS. This is close to double the 26% of adults (34% of internet users) who used a SNS in 2008. Among other things, this means the average age of adult-SNS users has shifted from 33 in 2008 to 38 in 2010. Over half of all adult SNS users are now over the age of 35. Some 56% of SNS users now are female.

The summary of findings reveals that Facebook dominates the SNS space: 92% of SNS users are on Facebook; 29% use MySpace, 18% used LinkedIn and 13% use Twitter. There is considerable variance in the way people use various social networking sites: 52% of Facebook users and 33% of Twitter users engage with the platform daily, while only 7% of MySpace and 6% of LinkedIn users do the same.

10% send another user a private message

The average American has just over two discussion confidants (2.16) – that is, people with whom they discuss important matters. This is a modest, but significantly larger number than the average of 1.93 core ties reported when we asked this same question in 2008. Controlling for other factors we found that someone who uses Facebook several times per day averages 9% more close, core ties in their overall social network compared with other internet users.

Facebook users get more social support than other people.

Facebook users are much more politically engaged than most people.

Over 31% of Facebook friends cannot be classified into these categories. However, only 7% of Facebook friends are people users have never met in person, and only 3% are people who have met only one time. The remainder is friends-of-friends and social ties that are not currently active relationships, but “dormant” ties that may, at some point in time, become an important source of information.

Social networking sites are increasingly used to keep up with close social ties.

MySpace users are more likely to be open to opposing points of view.

We measured “perspective taking,” or the ability of people to consider multiple points of view. There is no evidence that SNS users, including those who use Facebook, are any more likely than others to cocoon themselves in social networks of like-minded and similar people, as some have feared.

A measure of the weather. An indication of the impact of Queensland’s problems with the weather early this year is provided this morning in figures on interstate trade released by the Australian Bureau of Statistics. 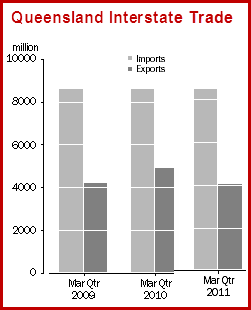