What has the war on terror cost taxpayers, and did they get value for money?

Spending on the war on terror is higher now than at the height of 9/11 hysteria. Budget papers show the Howard, Rudd and Gillard governments have spent more than $15 billion on the war since 2001.

How much has our role in the global war on terror cost us?

In a recent paper, two academics, John Mueller of Ohio State University and Mark Stewart of the University of Newcastle (the Australian one), looked at national security-related spending by the US Department of Homeland Security, its risk assessment process or lack thereof, and the extent to which the already extraordinarily low probability of terrorist attacks had been reduced.

The paper is compulsory reading for anyone who thinks national security-related spending is an automatic good, and that we are significantly safer for it. As reports today about the call for a new round of airport security measures demonstrate, such thinking has deep roots in Canberra. Politicians might take heed, for example, of research cited by Mueller and Stewart that shows that more Americans are dying because they’ve substituted road travel for the growing delays and inconvenience of short haul flights than have been killed by Islamic terrorists.

That doesn’t help us a great deal in working out how much we’re additionally spending on national security in response to the specific, alleged threat of Islamic terrorism. For one thing, a big chunk of the increase McClelland boasts of is just indexation alone — $18 billion in 2001 is now worth over $23 billion based on normal government indexation – and the Defence budget has been growing well ahead of inflation for much of that time. Plus, we don’t know how much that relates to the war on terror.

To get that figure, we have to go through budget papers since 2001 and identify every expenditure made in relation to increased national security, removing those plainly not related to terrorism, like measures related to stopping asylum seeker vessels, or measures aimed at organised crime. We confined the search to the Defence, Attorney-General’s, Foreign Affairs, Transport and Prime Minister and Cabinet portfolios, so the estimate is necessarily conservative.

The result: budget papers show that the Howard, Rudd and Gillard governments have spent just over $15 billion on the war on terror since 2001. Indexed into 2010-11 dollars, that’s $16.7 billion.

There’s a lot that doesn’t cover — internal reallocation of resources from other programs, for example, or the public service’s own internal security measures — every non-public access public service building in the country now has security guards, electronic pass readers and physical barriers, at a collective and ongoing cost of probably hundreds of millions of dollars. It cost $2 million just to put retractable bollards into the roadways at Parliament House. 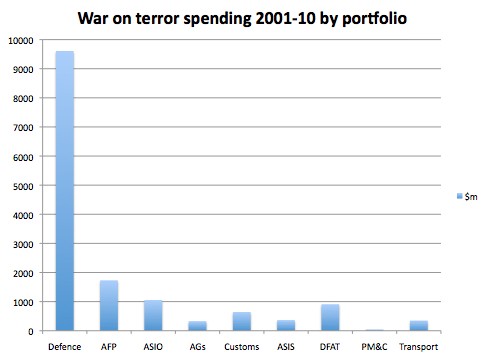 Defence is plainly the biggest component of the spend. The budget papers in recent years have detailed the cost of operations of our vassal state participation in the US wars in Iraq and Afghanistan.

The venture into Iraq to remove Saddam Hussein and install a US-backed government at the cost of a hundred thousand Iraqi lives cost Australian taxpayers $2.4 billion. The fiscal cost of the Afghanistan venture is $6.1 billion and counting, quite apart from the young Australian men who are being killed and injured there.

The AFP and ASIO are next biggest recipients. The AFP has received $1.7 billion in additional funding since 2001 for national security-related purposes, and the spooks, who saw successive governments throw more money at them every year, as well as a monumental blot-on-the-landscape new headquarters, received over $1 billion. But another surprising beneficiary was Foreign Affairs.

While ASIS, which operates within the portfolio, received an extra $365 million for the war on terror, the Department itself received over $900 million in additional funding, including hundreds of millions of dollars to improve physical security at embassies and high commissions around the world and fly the flag as occupying power at embassies in Baghdad and Kabul.

But what’s more interesting is the timing of the expenditure. As McClelland alluded to in his speech, our spending on the war on terror is not slowing down. This is an annual profile of spending: We are spending more now fighting Islamist terrorism than we were at the height of the post-9/11 hysteria. This mostly reflects our continued fighting role in Afghanistan — next year we’ll spend $1.7 billion on that conflict. But it doesn’t reflect how much war on terror spending has now been embedded in the budget, through permanently larger staff numbers at ASIO, and the AFP, and Customs, or the imposition of laborious security measures that reduce productivity, or the capital cost of servicing more expensive infrastructure around the world.

The numbers also don’t include spending outside government, for example by airlines that received some funding for measures like hardening cockpit doors, but which have otherwise passed on increased costs related to aviation security measures to passengers.

Aviation has been a particular target of the war on terror; indeed, the war in its non-combat dimension has been highly mode-specific because of the particular events of 9/11. This is despite motor vehicle travel dwarfing air travel in terms of passenger-kilometres in Australia (air travel accounts for around one fifth of the passenger-kilometres in motor vehicles), meaning improvements to road safety will, as the US data on road fatality increases since 2001 show, save far more lives than aviation security.

Governments have spent around $1.3 billion on aviation security for passengers and air cargo during the period, a sum almost certainly likely to have saved far more lives if spent on road infrastructure.

Indeed, as we’ll see tomorrow, $16.7 billion deployed almost anywhere else would have almost certainly had far greater benefits for taxpayers.

*Tomorrow: who profited from the war on terror, and has it made us safer?

Did the Attorney General's Department drop the ball on keeping track of the lobbyists running around parliament?

Who’s safe from the police state?

Crikey readers discuss the evidence of a creeping bureaucratic police state in Australia — one from which not even the government's friends are safe — and question the practicality of the government's boycott ban.

Interesting article …. very hard to measure the outcomes of essentially preventative expenditure … you are measuring something not happening.

I think the road accidents versus airport/plane security is a bit of a stretch considering that premise.

The idea behind the security spending is to prevent terrorist attacks – not to “save lives” and that does not lend itself to a crude and simplistic comparison with road accidents.

Good luck on actually quantifying Defence spending on the ‘War on Terror’ (WOT).

Much of the expenditure outside of actual deployment costs (the amount actually spent in another country) would probably be spent anyway in the continuous training that is part and parcel of a service persons life.

Does every trooper who undertakes training before deploying to Afghanistan get counted? They would have had the same training before they deployed to East Timor or the Solomons. Can’t claim it is direct WOT spending then.

You would have to find the costs involved in supporting a single trooper each day from the day they set foot in Afghanistan to the day they leave, and multiply that by the number of troops per day in the years since forces were committed overseas. Good luck on that.

Then you have to work out the costs of ammunition expenditure and fuel expended in operations overseas, less the costs for the fuel and ammo that would have been expended here in training. Once again, good luck with that.

The Defence Department struggles to put exact figures to these expenditures, due to different methodology of the three services, so I would be interested in how you arrived at your figures with any accuracy.

complete waste when Pakistan is complicit

Isn’t it an irony that one of Bush’s express aims in the war on terror was to export democracy to the middle east. and now that it is desparatey trying to be grasped by Tunisia, Eygpt, Libya, Bharain and Syria – the conservatives are nowhere to be heard.

When the young men and women of the middle east have opted for a western model of representative government in preference to the Talib /wahabist /muslim brotherhood based model of theocracy – it is by some measure an indicator that there has been a victory of sorts in this war (on terror/of terror) by the west – but who is bothering to take credit?

This lack of claiming credit might be – that if we in the west acknowledged this trend to representative democracy – the spending might have to cease or even shift to civil models of intervention. And ever since Eisenhower the military industrial complex has never taken well to being weaned off the taxpayer’s t_t.

The phrase “WAR ON TERROR” was cleverly coined by the NEO-CONS in the US for a variety of reasons, but mainly to give them “carte blanche” after 9/11 to pursue their own devious political and economical agendas. By declaring it a “war” they found “enemies” and anyone they disliked became “terrorists”! Easy! The media lapped it up and ran with it. The still do!
Let’s face it, these violent crimes are being committed by criminal gangs and, especially after 9/11 in an environment of worldwide empathy, this should have become an INTERNATIONAL POLICE MATTER. The question WHY these crime syndicates are committing mass murder was never asked but religion definitely does not come into it! The stupidity of the media generally, the dysfunctional political systems and the mediocrity of it’s politicians are costing the world dearly!