The headline was more dramatic than the story beneath it but we can expect to see more like it as this Labor Government stumbles from one absurdity to another.

Here we go again. The headline was more dramatic than the story beneath it but we can expect to see more like it as this Labor Government stumbles from one absurdity to another. Leadership stories are just so much fun to write! 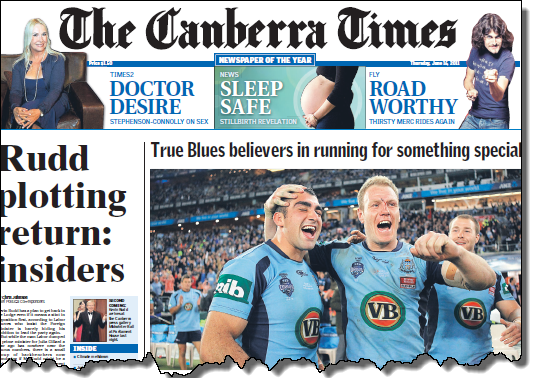 Not that this morning’s Canberra Times effort is actually predicting anything will happen soon. This speculation takes us forward to a patient Kevin Rudd waiting until after the inevitable defeat of Julia Gillard led Labor before making his move to return to the Lodge.

Don’t worry. With both houses of parliament now voting to say that the Malaysian boat people swap plan is a nonsense there will soon be stories saying that a challenge is on the short term agenda.

And who knows — the story might even turn out to be true for there is nothing like the fear of losing your seat to make an MP’s mind turn to changing the leader.

Repeating words about being in a hurry. Perhaps the best move Julia Gillard could make to preserve her position would be to immediately order her ministers to halve their number of advisers. For it is Labor’s backroom boys and girls who feed the nonsense that the so-called “24 hour news cycle” must be fed by a government taking immediate action on whatever becomes the problem of the day.

Let me be self indulgent enough to repeat what I wrote in Crikey last week.

One feature of this federal government is that it is always in a hurry. There is no patience to wait until everything is in order before making an announcement. Don’t wait until the bureaucratic niceties are completed. Get it out there and get it out quick appears to be the motto.

And the result of all this haste tends to be negative rather than positive. The “deal” with Malaysia is but the latest example of how a policy that seemed like a good idea at the time turns bad before it is implemented.

The possibility that the UN High Commissioner for Refugees will not give the stamp of approval to that Malaysian plan – see the story in this morning’s Melbourne Age – is not the only example of how acting first and thinking later can get a government into trouble. The live cattle trade ban is another and the drawn out process of devising a carbon tax the most spectacular example.

Muting the inflation risk. Interesting to note that the Organisation for Economic Cooperation and Development does not have the same fears of an outbreak of inflation in the near future that many of the local economic commentators have interpreted the Reserve Bank Governor Glenn Stevens as foreshadowing in a speech yesterday. The last OECD summary of economic conditions released late last month says the Australian economy is set to rebound after the disruptions caused by major natural disasters in early 2011.

“Growth, driven by historically high terms-of-trade, should accelerate from 3% in 2011 to4½ per cent in 2012. Unemployment is projected to fall, although the remaining slack in the economy will mute the risk of inflation pressures.”

Governor Stevens in his speech, while noting that “as of today, measures of capacity utilisation are not as high as at the end of 2007, and unemployment is not as low as it was then”, nonetheless, the degree of slack in the economy overall does not seem large in comparison with the apparent size of the expansion in resources sector income and investment now under way.

With that general outlook, it follows that macroeconomic policies must be configured in the expectation that there will need to be some degree of restraint. Monetary policy has already been exerting some restraint for a while. Looking ahead, our most recent analysis (as published in early May) concluded that the underlying rate of inflation is more likely to rise than fall over the next couple of years.

This central expectation — subject to all the usual uncertainties inherent in forecasting — suggests, as we said at the time, that ‘further tightening of monetary policy is likely to be required at some point for inflation to remain consistent with the 2–3 per cent medium-term target’.

It remains, though, a matter for judgement by the Board as to whether that point has been reached. At its most recent meeting, the Board’s view was that it had not been. New information will, as always, be important in our monthly assessments of what monetary policy needs to do.

As far as prices are concerned, we will get another comprehensive round of data in late July.

Translated that probably means that the consumer price index figures for the June quarter will be the factor that determines whether official interest rates go up or not. And if the OECD assessment is correct then any inflationary pressures will not be of the kind that an increase in rates will affect.

Crossword clues. A five letter word answer please: “It’s a German first name that has fallen somewhat out of fashion.” And four letters for “German politician (‘freedom flyer’) of the 20th century”. Answers to these examples from a word game in party campaign literature from Germany’s right-wing extremist NPD is causing a few internal disruptions. Some within the Party have been trying to cast off its attachment to Third Reich nostalgia and think that “Adolf” and “Hess” are a bit of a turnoff.

The crossword, reports Der Spiegel, is part of NPD election material for the Berlin city-state election to be held in three months time.

The crossword puzzle is among “the dumbest PR actions in the history of the NPD” and “stupid squared,” Hesse state party leader Jörg Krebs told online publication DeutschlandEcho over the weekend.

Berlin NPD leader Uwe Meenen disagreed, telling the Süddeutsche Zeitung that criticism from those like Krebs was trivial. ”

He’s not responsible in Berlin,” he told the paper. Meenen refused to elaborate on the Nazi references in the crossword puzzle for fear of “ruining the fun of the riddle for people.”

Just an Australian source. Further to yesterday’s little snippet about giving anonymous sources a kind of title to make what they say seem authoritative come these examples from this morning’s Melbourne Age:

Seems to lack the gravitas of the Wall Street Journal’s “a person familiar with the matter” that caught my attention yesterday. But no worse than the very bland “Labor sources” that the Canberra Times in the story at the top of these snippets has insisting that the Foreign Minister is barely hiding his ambition to lead the party again.

Further examples of this journalistic art form will be welcomed.

Who will buy the former Fairfax regional papers, including The Canberra Times, and how much will they sell for?

The controversial move will raise questions about Nine's intention for some of the Fairfax assets.

Despite the campaign against him, what Andrew Barr said about mainstream media in this country is, unfortunately, true.