Crikey analysis of budget papers show that the Howard, Rudd and Gillard governments have spent just over $15 billion on the war on terror since 2001. Indexed into 2010-11 dollars, that’s $16.7 billion.

Crikey analysis of budget papers show that the Howard, Rudd and Gillard governments have spent just over $15 billion on the war on terror since 2001. Indexed into 2010-11 dollars, that’s $16.7 billion.

In fact, we’re spending more now fighting terrorism than we were at the height of the post-9/11 response. 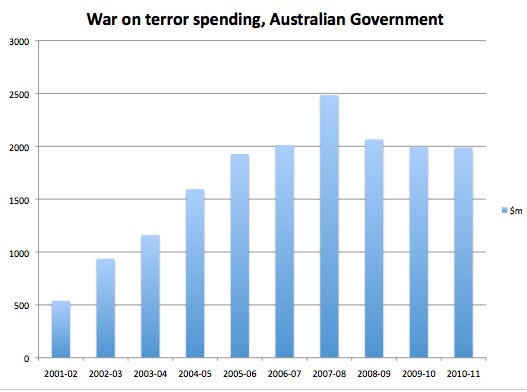 In a special Crikey investigation Bernard Keane has drilled down into the numbers to piece together a picture of war on terror spending across all departments.

Consider this set of numbers: the venture into Iraq cost Australian taxpayers $2.4 billion. The fiscal cost of the Afghanistan venture is $6.1 billion and counting — not forgetting the young Australian soldiers who are being killed and injured in that conflict. Next year we’ll spend $1.7 billion in a war that we’re constantly assured, without evidence, is “making progress”.

The AFP has received $1.7 billion in additional funding since 2001 for national security-related purposes, and the spies at ASIO — whose idea of accountability to parliament is to cut-and-paste from one annual report to the next — received over $1 billion.

What’s absent from any discussion of what we’ve spent fighting Islamic terrorism is evidence of whether that spending has been justified. The demands for cost-benefit analyses elsewhere mysteriously vanish when the subject of national security spending arises. The KPIs and output measurements so in vogue across government don’t seem to apply. We’re meant, it seems, to take comfort from the vague feeling of being safer from terrorists.

But like any spending, that $16 billion could have been directed elsewhere. It could have made our roads safer, or our hospitals better, or improved life and health in our indigenous communities. Successive governments have ducked the issue of accounting to taxpayers why that spending is better directed at addressing the marginal threat of terrorism rather than on other priorities that might save more Australian lives. Determining whether our “war on terror” spending has done anything at all to make us safer ought to be a priority — if only because we’re continuing to spend huge amounts on it, a decade on from 9/11.

Good to see this focus on the cost of the so called war on terror. Like any government program, it should be subject to a thorough evaluation after 10 years and modified or abolished if the situation has changed, which it has. Good program development would have seen a review date written into the original legislation/budget allocations.
Also worthwhile showing the budgetary cost of the war in Afghanistan. If the human cost weren’t enough, this should start some debate on whether we are getting value for money.

the AFP are crawling all over the world hunting and jailing refugees. That is the most of their budget.

The most ridiculous aspect is that our involvement in the war on terror particularly our involvement in Iraq and Afghanistan is likely to be the only thing that increases our risk of terrorist attack significantly. The more we stay out of it the less of a target we become.