Front Page of the Day. The Queensland Budget, wolfpack style… 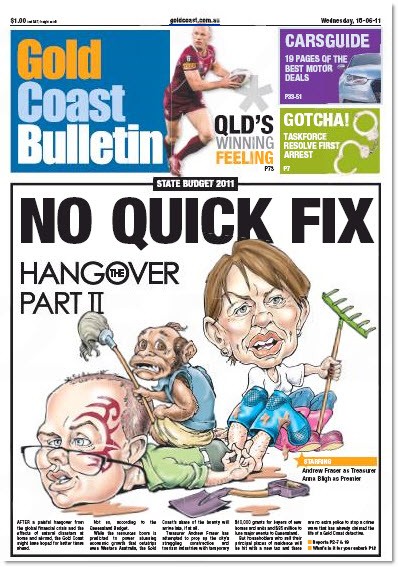 The Department of Corrections. There is a fish killing “rise of the machines” going on in the city of brotherly love according to the Philadelphia Daily News in its edition yesterday. Actually, no there’s not. The Daily News set the record straight today. No machine, only sheen… Weekday editions of SMH and Age may ditch broadsheet format.

“Switching the Sydney Morning Herald and The Age to a tabloid or midsize format are back on the agenda under Fairfax Media’s new management, Mumbrella can reveal. Although no decision has been made, Jack Matthews, CEO of the company’s metro division, told Mumbrella that he would be surprised if the Monday to Friday editions of the Sydney Morning Herald and The Age remained in broadsheet format.” — mUmBRELLA

“Dame Elisabeth’s stand is consistent with the stated position on climate change of her son Rupert, but out of step with coverage in his newspapers, as reflected in the front pages of flagships The Australian and Herald Sun yesterday. While The Australian splashed with a report saying a carbon tax would force eight coal mines to close and cost thousands of jobs, the Herald Sun ”revealed” that the carbon tax would push up the prices of Mars Bars and McDonald’s.” — The Sydney Morning Herald

US newspapers that bounced back

“There was good reason to worry about the health of newspaper organizations — and there still is — but look closely at a few that were labeled ‘doomed’ by pundits, and it becomes apparent they’ve learned a lot in a very short span of time, and while they’re remaining committed to journalistic standards and core competencies, they are completely re-engineering the way they gather, manage, and deliver information.” — Editor and Publisher

In 1982, the New York Times predicted our digital future

“The report warned that the new technology would raise difficult issues of privacy and control that will have to be addressed soon to ‘maximize its benefits and minimize its threats to society.’” — Poynter

“It was predictable that hoaxes would proliferate in the new electronic journalism. Almost everyday some celebrity dies a Twitter death. The Amina story may set a record, as coverage seems to have increased as it became more widely known it was untrue.” — Huffington Post