Maybe it won’t be presidential next time

We have got so used to politics being personalised around the leaders of the major parties that is hard to imagine what an election would be like if they were not the centre of attention.

Maybe it won’t be presidential next time. We have got so used to politics being personalised around the leaders of the major parties that is hard to imagine what an election would be like if they were not the centre of attention. Yet that surely is the prospect for the next federal poll when the respective party tacticians try to cope with the unpopularity of Julia Gillard and Tony Abbott.

Now at lot of things can change in two political years but on the current indications Australia has never had such an unpopular pair vying for the nation’s top office. Building a campaign around either one if things do stay the same is hardly going to be a vote winner.

How to handle a problem like that forbid that we actually see policies becoming the determining factor. But I suppose that won’t happen either as along with their record unpopularity Australia has never had such a pair of blatant liars making the promises.

A two month precedent. In the eruptions of 1960 and 1921-22, the Chilean volcano Puyehue-Cordón Caulle spewed forth its clouds of gas and pollution for about two months. That’s a bit of a worry for Australian air travellers although the director of the Chilean National Service of Geology and Mining (Sernageomin), Enrique Valdivieso, was quoted overnight as hoping that this time it will only be for two weeks. 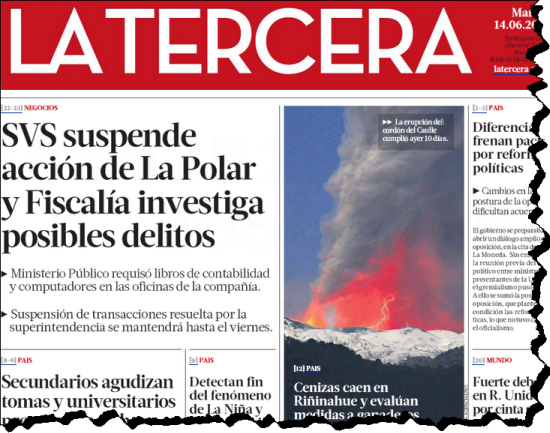 When the music stops. It is hard to disagree with billionaire investor George Soros that the chances of positively resolving Europe’s serious debt problems are decreasing from day to day as authorities focus on “buying more time,” not solving problems. Reuters reports Mr Soros told an economic conference overnight:

“You have a very serious problem in Europe, the over-indebtedness of some countries: Greece, Portugal and Ireland.

“The authorities are not providing a solution but basically buying time. They have always done that, that is the normal thing for authorities to do. In this case, I’m afraid they are making a mistake.

“There is a resolution, probably under pressure of the crisis, a resolution will be found but the sooner it is done the better.”

The financial markets are clearly apprehensive about when a solution will come and what it will be. The cost of borrowing for Greece, Portugal and Ireland reached an expensive new high overnight. A person familiar with the matter. Giving anonymous sources a kind of title to make what they say seem authoritative is quite a journalistic art form. The European edition of the Wall Street Journal this morning had “a person familiar with the matter” disclosing that the British government will soon announce plans to force banks to separate their retail and investment banking arms.

If you are making a day trip between any of the SE capital cities today, cut your losses and go home now, or, pack a change of clothes and a toothbrush, warns Ben Sandilands.

Visible concentrations of volcanic ash from the Chilean Mt Puyehue eruption are predicted to enter airspace over Adelaide early tomorrow morning and then track across SE Australia, reports Ben Sandilands.

On the third full day of havoc resulting from clouds of volcanic ash from a Chilean eruption being blown into Australian and New Zealand airspace it remains Qantas versus everyone else (even the RAAF) when it comes to its insistence on grounding any flights.