Hanson hoax: how did the Rattner case ever get to court?

The "Rattner papers" -- a 400-odd page file of affidavits, emails and court documents-- suggest alarm bells over Pauline Hanson's legal challenge should have been ringing months ago. Matthew Knott picks over the warning signs that went unheeded.

Pauline Hanson has finally shut down her campaign to snatch a seat in NSW parliament, but irregularities in documents obtained by Crikey raise serious questions about whether her case should have been abandoned long ago or not pursued at all.

Sydney schoolteacher Sean Castle admitted in court yesterday that he had concocted Hanson’s key piece of evidence: an email exchange purporting to show a vote-rigging cover-up at the highest levels of the NSW Electoral Commission.

He sent the emails to Hanson in April under the name Michael Rattner and later claimed that he had obtained them through his girlfriend who worked at the electoral commission.

Castle gave evidence under a certificate of protection to ensure his testimony cannot be used against him in any future criminal trials.

Tough questions are now being asked about the performance of Hanson’s legal team given their client may have to pay up to $100,000 in costs. A lawyer for one of the defendants told Crikey: “The case should never have gone this far. It was fundamentally flawed from the start.”

The “Rattner files” — a 400-odd page assortment of affidavits, emails and court documents– suggest alarm bells should have been ringing months ago. 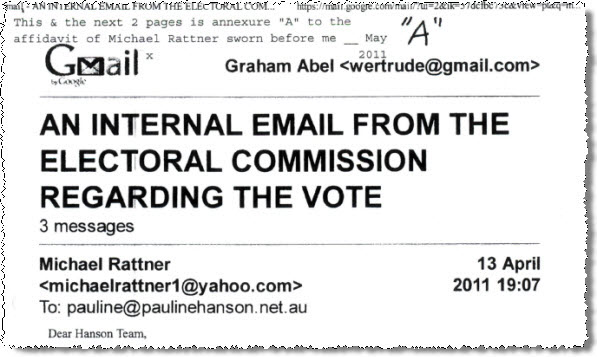 Here were some warning signs that went unheeded:

1. Rattner’s shifting story. In his first email to Pauline Hanson, Rattner claims to have been given the emails by his “partner…[who] is close to someone in the NSW Electoral Commission.” Yet in his draft affidavit, the story has changed. Suddenly, his girlfriend is not only “close to someone” at the EC: she is a fully-fledged employee.

In email exchanges with Hanson’s lawyers, Rattner repeatedly emphasises that his girlfriend — at one stage he even calls her his “fiancee” — does not want to appear in court or even be identified publicly. “I will assist you but she doesn’t want to,” he writes on May 19. “I am sorry if this is not good enough for you but thats [sic] all I can do.” Yet less than a week later Rattner has agreed, in a phone conversation with Hanson’s solicitor, to “tell the court my girlfriend’s name [even though we] might split up over this.”

These discrepancies are not explained anywhere in the documents.

Most bizarrely of all, according to Hanson’s lawyer David Leamey, Rattner’s Facebook page listed him as gay — even though his girlfriend was supposedly his source.

2. The mysterious woman. No document lodged before the court answers a vital, and obvious, question: How could Rattner’s partner, even if employed by the commission, have obtained a copy of such explosive private correspondence between two senior officials?

3. Seriously weird emails. There are several oddities in the brief email exchange attributed to the electoral commission’s chief information officer, Ian Brightwell, and communication officer Richard Carroll. Brightwell’s tone is distinctly cavalier. He breezily mentions  that “dodgy electoral staff” may have cost Hanson some 1200 votes across the state and tells Carroll to “stonewall” the press if they ask questions about the count. The emails give no indication why Brightwell or Carroll would sweep such extensive vote-rigging under the rug.

Furthermore, on June 3, an affidavit signed by Brightwell was lodged in court in which he swore the correspondence was not authentic. He also attached GPS records from his iPhone showing that he was out of the office at the time he was supposed to have sent the email. It did not carry the regular “sent from my iPhone” note.

4. Rumours that became “facts”. Pauline Hanson’s statement of facts, lodged on May 20, says: “She [Hanson] is aware that at least 1,200 valid formal primary votes for her votes were incorrectly sorted into the blank pile…(emphasis added).” Yet there is nothing, even in the phoney email exchange, to support this claim. In Brightwell’s (fake) email, he does not profess to have concrete evidence of vote-rigging; it is merely something he has heard “through the chain”. And the 1200 figure is given as a maximum number of votes lost, not a minimum.

5.  The scandal that wasn’t. The genesis of the whole affair appears to have been an April 3 email by one of Hanson’s scrutineers, Lynette Hammonds, to the Pauline Hanson Group. Hammonds observed an electoral commission employee, at a Riverwood polling booth, realise that 15 votes for Pauline Hanson had been included in a stack of blank votes. Hammonds wrote: “She [the employee] immediately pulled them out and reported it to the supervisor, who said he would put in his own report about the incident.” Rather than evidence of state-wide, systematic vote-rigging, Hammonds- tale shows EC workers moving quickly to rectify a relatively minor mistake.

It’s easy with hindsight, of course, to identify all these oddities. And as Hanson’s lawyers, Peter Lowe and David Leamey, argue: Castle’s hoax was in many ways elaborate. Before going AWOL, “Rattner” kept up a level of email correspondence that would impress even Gerard Henderson. He spoke to Leamey several times on the phone and even posed as a Daily Telegraph journalist to speak to Greens upper house MP Jeremy Buckingham.

Peter Lowe said he was unable to comment when contacted by Crikey this morning. He has previously defended his team’s work, saying Rattner’s allegations were serious ones that needed to be tested in court. He does admit, however, that no-one from his team met their star witness face to face.

As Pauline Hanson’s dream collided with reality yesterday, it was hard not to feel sympathy for the flame-haired heroine of the far-right. But she is hardly a blameless victim in this affair. Before the Rattner emails had even landed in her lap, the serial candidate was demanding a recount. The computerised counting system used in NSW, she claimed, was unfair. The people of NSW spoke on March 26 but Hanson refused to listen. Now she will pay a heavy price.

As for Castle, charges related to forging documents may be looming. And one question remains begging, screaming, to be answered: Why on earth did he do it?

Why did Grech do it? Maybe he hated the serial pest and decided she needed a lesson.

She has been a serial hoaxer scamming the public for a decade.

I felt sorry when Abbott had her sent to prison (is this guy anywhere near Abbott’s electorate), don’t feel sorry now.

In fact I laughed my head off.

Yes indeed, that is the question screaming to be answered.

You’d need to have a powerful motive to go to the trouble that Sean Castle went to and two powerful motives suggest themselves: a left-motivated one (to con Hanson into believing she’d been dudded, with the final result being that it’d be proved she wasn’t and she’d look silly) or, a right-motivated one (to entrench a bogan myth that the establishment would go to any lengths to keep her out of parliament).

I checked out the website of the Toongabbie Christian school that Sean Castle teaches history at. It appears to be a very conservative Baptist outfit – not exactly the sort of place where a demented left-liberal anti-Hansonist would feel at home, or, indeed, rise to being a senior member of staff.

At this stage I tend to favour the right-wing motive, with the prank getting disastrously out of hand because it got more serious forensic attention than the perpetrator expected.

Must say though, that I’m mystified that a certificate of protection was issued. I mean, Hanson may be silly, but surely Castle (apparently on his own initiative) has caused everybody a hell of a lot of trouble and should be bought to book.

Another question: did Hanson arrive at the 1200 votes figure herself or did somebody else suggest it? If so, who was that?

I’d say Hanson pushed her legal team into this arguing that as she was paying the bills, they would do what she wanted. I’d go along with the right-wing motive too, probably instigated by Hanson herself to win sympathy. Her supporters would accept a ‘plot to keep me out of parliament’ line without question. I guess they’ll now be asked to donate towards her legal costs. Hanson has always pushed the ‘I’m just a battler’ line , despite being a wealthy woman, and her fans have always swallowed that lie too. I’m sure they’ll be only too happy to hand over some cash to help her out.

As for sympathy for Hanson – not at all. She brought this on herself and she richly deserves all she gets and all she loses from the mess. She can wipe the egg off her face, pay the legal costs and, I hope, vanish from politics for ever.

Another warning bell: would Ian Brightwell really send an email that included the phrase “supposed to of found … “? (Come to think of it, what is a senior history teacher doing forging such an email?)