Brian Abbey writes: Re. “PC reveals the great greenhouse rip-off” (Friday, item 4). Regarding Bernard Keane’s admirable efforts to introduce some perspective into the flim-flam stuff now around on emissions and “leading the world”.

I well recall the tension injected into the usually humdrum business of reforming accounting standards to achieve some global consistency some years back when the European professional bodies, with some visible government support, outlined what they would do to Australian companies if the Australian profession did not shape up, which it was dithering over and obviously reluctant to do.

I’m well aware too of the shenanigans that governments get up to when seeking to block/delay imports for purely anti-competitive reasons by delaying customs/quarantine clearance or resurrecting ages-old disease fears. I’ve also looked at the WTO measures to break down their resistance when it is not supportable.

Like everybody else I’ve been watching what the Eurozone airline regulator is going to do to airlines flying into Europe which are not already subject to emissions taxes. And I didn’t overlook what the Australian animal lovers via the Feds are doing to the Indonesian processors and consumers and the [complicit] Australian producers.

I’ve not yet been able to see Garnaut’s survey of how much is already being done elsewhere by other governments; but who can imagine that an increasing number of complying [realistic] governments will not seek to use the same system of penalties, boycotts and embargoes against governments and their exporters who seek, through greed, parochialism or for imagined commercial advantage, to avoid introducing measures intended for the overall good of the planet?

And yet, here is my point, I never see this factor introduced into the debate, even as one to conjure with when the News hacks and their mates are worrying about “leading the world”.

Geoff Russell writes: Bernard Keane is right to expose the rip off, but doesn’t mention one feature that veritably leaps of the graph he reproduces of  selected subsidies.

Solar PV might be a nice toy for the rich but it is too expensive to replace coal.

A report by Manfred Lenzen (for the Australian Uranium Foundation) which also examines subsidies looks at them in a slightly different light. Divide the dollar subsidy by the energy actually produced. Suddenly the millions invested in nuclear power over the years looks tiny next to solar subsidies, which are about 30 times higher per unit of energy produced. Not that a huge investment  would be a problem if it was delivering on the hype. But it isn’t.

ABC’s Catalyst had a recent story on solar PV which flashed back to a previous story predicting the replacement of coal by solar PV in 10 to  15 years … when was that prediction made? 1989.

Two pictures says it all.

First, Germany, focus on the ten year period 1998 to 2008, during which time engineers had access to modern computing and communication technology to assist their design and development efforts: 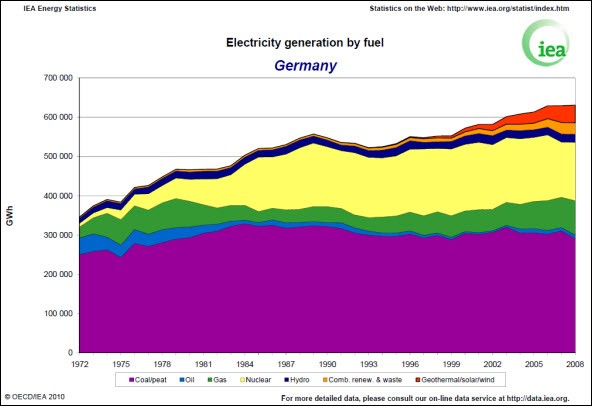 And France, focus on 1977 to 1987, and they did it all without modern computing and communication technology: Les Heimann writes: Re. “Faulkner’s pessimism is justified” (Friday, item 1). As a long standing — now totally cynical — member of the Australian Labor Party I agree with much said by comrade Faulkner. However — he is far too late — the ALP is dead and can’t be rescued.

So why am I a still a member?  Because I believe in now old fashioned values such as commitment and loyalty — what a fool I am.

I once held a number of positions in the party (I was even a candidate in a an unwinnable Liberal seat just to help out) — and I was then not a member of any faction (yes that was possible because we had lots of members who were not members of a faction).

Now we have branch stacking and a whole lot of rubbish that has completely destroyed the ALP as a participative political organ. The party I was once proud to be a member of (how bloody stupid was I?) is now an exclusive club “owned” for the most part by professional University graduates intent on careers in “power”. These types swarm the party ensuring virtually every position is snagged to their liking and filled by those who seek their own nirvana — power over all.

These creatures now populate every state and federal parliament — I’m suggesting the Liberal Party also has more than their fare share as well.

However, sticking to the ALP — many parliamentarians, advisers, staffers, spin doctors et all are these empty power seekers bereft of ideals, uncaring for any but themselves, scuttling and swarming around corridors and small rooms buzzing with power plays and plots and carrying no big picture in their knapsacks. They don’t even have a postcard of policy or ideal and they have discarded all but their electronic gadgetry to press ever onward to seek or to hold power.

There is no longer a political party in Australia — certainly not the ALP. Just a cluster of rent seekers and odious unprincipled, arrogant know nothings intent on their own self aggrandisement.

The common herd needs to start again — a new party that has ironclad rules based on inclusion and grassroots decision making. Democracy is dead in the ALP and Faulkner, indeed everyone, knows this to be the case.

Where are the idealistic young champions today? Are we seeing the beginning of the end? As Rome fell, will we?

Justin Templer writes: David Williamson’s comment (Friday, comments) expanding on his defence of Cate Blanchett and defending himself against charges of glibness was straight out of Private Eye’s “Luvvies” column (which exposed the embarrassingly myopic self-absorption of those in the “dramatic arts”).

According to Williamson, actors, through research of the characters they play, “have a deeper knowledge of human motivation and the power of social forces than the general population.” This is gob-smacking stuff.

How can Williamson possibly believe that a deep study of the character of Ophelia or Elizabeth I would give one far better understanding of the multi-faceted population of Australia in 2011 than would working with or managing a team of living people, for all of its mundanity.

Andrea Henwood writes: On hearing some politicians think Cate should stick to acting and leave politics alone: only if politicians stick to policy and leave acting alone.

Wes Pryor writes: Re. “Richard Farmer’s chunky bits” (Friday, item 11). Statistics: 34% lies, 56% damned lies, 27% misinterpretation. Richard Farmer chases a little red graph squarely up the wrong tree when he suggests it indicates “success on the binge drinking front”. It does nothing of the sort.

An overall average reduction implies nothing whatsoever about the number of people drinking in a manner described as “binge drinking'”. It doesn’t matter a sod what your definition of binge drinking is — these descriptive data say nothing at all about that behaviour, only average per-capita consumption.

It could plainly be that fewer people are drinking, but they’re drinking more — antithetical to the original assertion that Minister Roxon should be pleased with the data. Or even, as another commenter said, that “In fact, the Ready to Drink (RTD) tax managed to turn around a 15 year-long decline in beer consumption.”

Reporting standard deviations and not making too much of descriptive stats? I’ll drink to that.

Jim Gobert writes: News Ltd reports: “Families caught in carbon crunch as tax sends prices soaring“. Shock , horror, is this the end of the world as we know it? Will we starve to death in the dark??

Helen Mackenzie writes: Re. “Drag0nista: political private lives CAN be a public issue” (yesterday, item 12). Drag0nista’s assertions about the reasonableness of media exposure of the s-xual activities of politicians lack any evidence that politicians who engage in extra-marital s-x exhibit “poor judgment and limited willpower” in any other area of life than the s-xual (and really who can be sure that that is what they are exhibiting even in the s-xual arena anyway) .

Where is there any evidence that politicians who have an extra-marital affair or, like Congressman Weiner, carry on s-xting flirtations with a number of consenting women, “most likely put their own needs before that of the community and the nation.”

There are lots of ways politicians can exhibit poor judgment or lack of willpower. Based on the size and shape of some politicians one can infer that they exhibit a certain lack of judgment and willpower at the table. Must this mean that they are likely to put their needs before the nation’s.

Should their menu choices be scrutinised by investigative journalists and made public in ways designed to humiliate and hurt them and force them from office. Why is private consensual s-xual behaviour any different?

Cat Beaton, Nuclear Free NT Campaigner, Environment Centre NT, Darwin, writes: Draft legislation that paves the way for a nuclear waste dump to be built near Tennant Creek will be debated in the Senate this week.

The draft legislation is a national disgrace. The National Radioactive Waste Management Bill overrides NT legislation banning the imposition of nuclear dumps — indeed the legislation gives Canberra the right to override any and all Territory laws. There is no precedent for legislation as draconian and authoritarian as this in Australia.

In the NT we have seen clear opposition from Traditional Owners, the NT Government, Local Government Associations, church groups and medical and health organisations. I hope that Ms Julia Gillard, Mr Martin Ferguson and the senators voting this legislation through realise that this is not the end of our battle to keep the NT waste dump free, rather — it is the beginning because we will not allow dodgy undemocratic legislation see us be dumped with radioactive waste earmarked for a region that has no science backing it.

Tackling climate change requires putting a price on carbon. A carbon tax is the best way to do that.

Crikey readers unpack the CPRS and the ongoing fight for effective climate action, while former PM Kevin Rudd drops us another line to reaffirm his legacy.

Good morning, early birds. Australia is predicted to miss its Paris Agreement targets by a large margin, and Turkey warns Australia against joining any sanctions movements as Ankara's invasion of Kurdish territory continues. It's the news you need to know, with Rachel Withers.