Another amusing instalment to Melbourne's newspaper wars over the long weekend with Damon Johnston's Sunday Herald Sun deciding to splash with a double page spread excoriating The Age for accessing the ALP's Eleczilla database in the lead-up to state election.

There was another amusing instalment in Melbourne’s newspaper wars over the long weekend, with Damon Johnston’s Sunday Herald Sun deciding to splash with a double-page spread excoriating The Age for accessing Labor’s Eleczilla database in the lead-up to November’s state election. 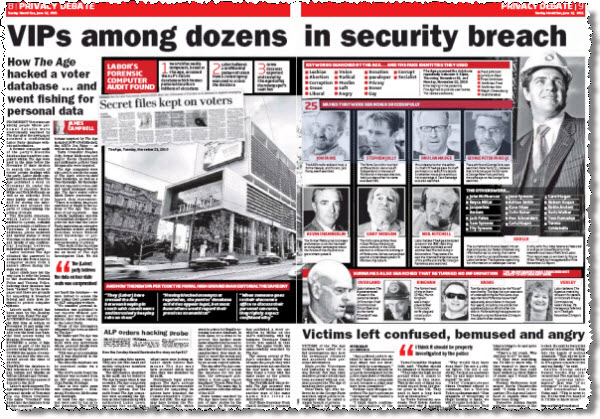 Labor Right-connected scribe James Campbell had been flicked the party’s internal audit into the saga, combing over an Age front-page story published in the week before polling day showing the party had compiled extensive Barack Obama-style dossiers on voters in several inner city seats.

The audit showed Age staff had searched for the names of prominent Victorians, some of whom appeared in the yarn written by dashing duo Royce Millar and Nick McKenzie. Other search terms such as “lesbian” were entered to see what kind of info the ALP was (legally) hoarding. However, the paper failed to disclose that it had accessed the database using stolen passwords. And there were some weird search terms entered, like Jon Faine’s son Jack, Red Symons’ wife Elly and son Sam and Age colleague Ben Schneiders.

Despite the ALP database being known about for years (a point immediately noted by Crikey‘s Pollbludger), Labor Right-aligned ALP state secretary Noah Carroll was understandably peeved at the security lapse, dispatching forensic IT experts to find out what was accessed and when. Cue Sunday’s Hez yarn.

News of the audit was first written up by Campbell two months ago, but the paper appears to have waited awhile to pull the trigger — perhaps not coincidentally at the end of a week in which the warring dailies had exchanged bilious barbs over a Hun pickup of a McKenzie story on the OPI inserted in its second edition.

Campbell’s angle was an interesting one. Instead of publishing the simple facts of the audit, he did a ring around of some of the figures searched by The Age, including Faine Sr., Neil Mitchell, pollster Gary Morgan and Peter Faris QC. Although some of the quotes were critical, savvy readers would have drawn immediate parallels to the celebrities hacked by the paper’s UK sister, the News of the World.

Some of the “VIPs” quoted didn’t appear to know what the paper was on about. At least two didn’t give permission for their quotes to be used on the record. And one of the alleged victims named in the Hun, Kate Shaw, decline to talk — which is unsurprising considering she is Royce Millar’s partner.

And Crikey understands that, in a few cases, those interviewed weren’t made aware that the database was actually Labor’s, rather than The Age‘s.

That information, according to senior Age sources, is crucial and should have been properly explained. They maintain the Herald Sun is shooting the messenger. Senior editor Mark Baker issued a strongly-worded statement, complaining that the luminaries “should be more concerned that Labor is stockpiling their information without their knowledge or permission”, rather than The Age‘s hacking.

The war could still have some way to run. News marshalled its troops again yesterday, with George Megalogenis having a poke in The Oz‘s media section and the Herald Sun quoting Faris declaring that The Age should be referred to Victoria Police.

One of the identities hit up by the Sunday Hez summarised the fracas saliently: “There’s hypocrisy from both sides in this … The Age should have declared they’d hacked the database and the Sunday Herald Sun is calling the kettle very, very black.”