In today's Media Briefs: TV News in Melbourne goes into Kim Duthie overdrive ... Will the new editor know where to go? ... Front Page of the Day ... and more ...

Will the new editor know where to go? Sorry, where did you say Geelong is…? 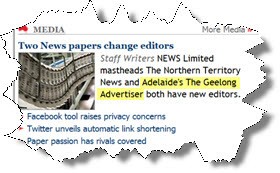 Front page of the day. The sordid Anthony Weiner scandal is the tabloid gift that just keeps on giving … Tablet growth of 750% predicted. Mashable has reported internet traffic will increase by 400% by 2015, and tablets will see a 750% growth in use. Following the release of The Age’s iPad app, the report further signals a shift in the way people consume their news (as if we needed further convincing this was the case …). Section of a graphic by Mashable Infograpics

“The announcement of the digital app service Newsstand was good news for news and magazine publishers this week, giving them a higher profile, dedicated space within iTunes and their customers a simpler subscription process. It also means customers automatically agree to keep paying subscriptions until and unless they choose to opt out, which is likely to mean more subscription revenues because us consumers do have a tendency to forget about these things.” — The Guardian

“An explosion of online news sources in recent years has not produced a corresponding increase in reporting, particularly quality local reporting, a federal study of the media has found.” — Editor and Publisher

Fairfax gets behind print readership survey

“Fairfax Media has reversed its opposition to the development of a new print readership measurement system and joined the industry body set up to oversee its creation.” — The Australian

“Call it a sign of the changing times: The Huffington Post had more unique visitors to its website than the venerable New York Times in May, outstripping the Grey Lady’s web traffic for the first time, according to data from market research firm comScore Inc. The newspaper, owned by New York Times Co, has been experimenting with a new online revenue model for two months now — a paywall that charges readers for access to more than a certain number of articles. In April, the first full month of the paywall, nytimes.com had 32.9 million unique visitors, still ahead of huffingtonpost.com’s 29.9 million.” — Financial Post