A 2009 report shows that the cattle industry regarded animal welfare as a marketing problem, that needed more funding for ads.

While Meat and Livestock Australia is emerging as the focus of cattle industry anger over the mishandling of the live export issue, a key industry review two years ago dismissed concerns about live exports to Indonesia as the work of “animal activists” trying to “turn the community against” live cattle exports to Indonesia. The review also proposed to reduce the proportion of levy funds directed at animal welfare.

The Meat and Livestock Association is another example of the growing Australian phenomenon of hybrid industries. The MLA is a corporation funded by a levy on cattle sales to undertake marketing, expand demand for beef and coordinate industry issues. It also funds research on a dollar-for-dollar basis with the federal government.

The MLA thus isn’t a government body, but it holds its position by virtue of government regulation. In addition to half-and-half research funds, the cattle transaction levy — until 1991 it was a “slaughter levy” — is collected by the Department of Finance and passed on to the MLA, for a charge of $900,000 a year. A separate body, LiveCorp, which works closely with MLA, also charges a live export levy, and oversees the handling of cattle, sheep and goats onto, aboard and off ships, but apparently not the slaughtering of live exports overseas.

The MLA’s levy is where the “Beef Marketing Funding Committee” comes in.

In 2005, the Howard Government approved an increase in the levy from $3.50 per head to $5.00 for additional beef marketing, but only temporarily. After five years, a review was to be conducted and if industry did not support the continuation of the increase, it would revert to $3.50.

A committee was formed of industry heavyweights, chaired by Queensland cattle baron Peter Hughes (who complained recently that the 4 Corners report was biased). It reported in May 2009. By that time, as we now know, the industry had been aware of, and notionally seeking to address, the conditions of slaughter of live export cattle for nearly a decade.

The report recommended that the higher levy be retained, and provided an extended SWOT analysis of the cattle industry, including the live export industry, and its markets. Bear in mind, this was a report by the industry’s leaders — listed on page 4 of the report — and not by the MLA or Livecorp.

On live exports, the report notes that 75% of all live cattle exports go to Indonesia and plainly sees Indonesia as the key growth market for live exports, because Malaysia and the Philippines are contracting markets. The report lays out a strategy for expanding marketing in Indonesia to drive increased demand for Australian beef.

And amongst “Threats”, the report identifies “Continued campaigns by animal activists to stop the livestock export trade”, and its response is:

Despite 99 .9% of all cattle exported arriving fit and healthy at their destination in recent years, animal activists who oppose the export of livestock continue to carry out public relation campaigns designed to turn the community against the trade. The current industry strategy to improve community awareness and support for the Australian livestock export trade will need to be continued . The current strategy aims to use media and events such as Royal Shows to inform and demonstrate to the community the systems and practices in place to provide high levels of care for cattle exported.

The report also outlines an indicative budget for live exports markets: it proposes to keep funding for “improving welfare standards” at $186,000 pa, keep “community support” at $725,000 pa, but boost market development activities from over $900,000 to over $1m pa. 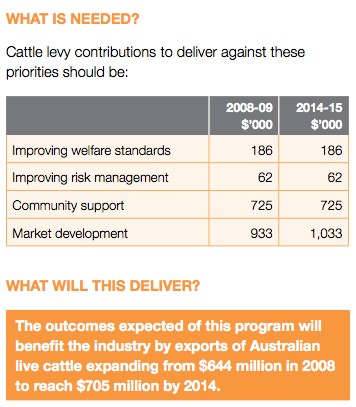 The view of the industry that animal welfare was a significantly lower priority than growing markets and was merely an issue being pushed by “animal activists” is confirmed by another, independent report on the levy increase, commissioned by the Committee and the MLA, by consultants Warwick Yates and Assoc and Econsearch (interestingly, the report concludes Indonesia only makes up half of live exports).

In much more detail than the Committee’s report, the consultants delve into the issue of community concern about the welfare of live exports and — declare victory. The report details how the industry significantly ramped up its funding for a “community concern program”, a marketing campaigned aimed at assuring people the cattle industry was humane.

Between 2004-05 and 2008-09, funding for the live export component of the community concern program more than doubled to $725,000, far more than the amounts being spend “improving welfare standards” in Indonesia.

All livestock industries are coming under increasing scrutiny by some sections of the community and media, particularly around issues of animal welfare and the environment. The beef industry can be proud of its record in these areas and also of the work currently being undertaken to improve both animal welfare and environment issues. It is important that the community is engaged and informed of the facts on these issues so that they can take pride in the work done by Australia’s beef industry.

The report goes through in great detail all aspects of the “community concern program”, from advertising to the use of Royal Shows to media management. Using an array of metrics, the consultants conclude:

The Community Concern Program has been successful as a proactive tool to counter and moderate public opinion previously shaped by those opposed to the live export industry, and to underpin the community’s trust in the beef industry. This program is an essential adjunct to the Live Export Program and should continue to counter animal rights activist rhetoric with facts about the live export industry. As focus intensifies on the management of natural resources and concerns for animal welfare grow, it will be increasingly important to not only address these issues but also to continue to tell the broader story of integrity behind the beef industry.

In short, concerns about animal welfare in the live export trade were regarded by the industry as a simple marketing problem — “animal rights activist rhetoric” that needed to be countered by advertising, soft-soap media stories and Royal Shows.

Attempts by some in the industry to shift the blame onto the MLA might be partly justified, but the evidence shows the entire industry was responsible for an attitude that regarded the solution to animal welfare concerns as more money for PR consultants.

There is almost no doubt that the suspension of the trade will cause hardship for northern cattle producers who will have to find money for dry season feed, transport and so on. Their cash flows will be badly affected.

But what they shouldn’t expect is for government to foot the bill.

MLA, Livecorp and all the other arms of the industry associated with the live cattle trade have known about conditions in Indonesia for years. What the industry did in the face of this knowledge was to gamble that public opinion would never catch up with them. Well, they gambled and they lost. Like any other gambler that loses, they will have to pay up.

And if the producers find it difficult to get waht they are owed by way of compensation and financial assistance from MLA and Livecorp, they can do what any other creditor would do. Seek appointment of receivers so that the proceeds from asset sales can be used to meet MLA’s and Livecorp’s obligations.

I saw the head MLA person, Don Heatley on News Breakfast this morning and his attitude seemed to be that the gov’ts actions in suspending the trade are unresonable and the MLA has in no way acted improperly. They had spent $4,000,000 over several years to improve things in Indonesia. Given Bob Katter says they get 60 to 70 million pa in levies you would think they had the capacity to do their job properly. Apparently not.

Like most Aussies, I found this whole story horrid and tragic. No normal person can stand by and accept cruelty to animals. It is (in my subjective opinion) a less than fully human response, to other living creatures.

But I have to add something: I find this whole horrible story a really good advertisment for vegetarianism. I am not one, (yet … though thinking very seriously about becoming one now), but I find it somewhat strange that we hear how people are so sad at the hitting and kicking of our cattle, before they are killed. I hate the idea that they were treated in a cruel way too, but think about what we are saying: it is still okay to kill them, to use giant knives to slice their flesh off their dead bodies, and then to cut that up and sell it and eat it. All that is okay so long as we kill them with as little pain as possible.

I appreciate the “limited” compassion argument; kill and eat, just dont hurt them first…. but really… the vegetarians out there must be thinking: you meat eaters are sufferring from some kind of logic breakdown: you say you care… but your care stops short of your eating habits, or your economic self-interest. You say you care: so long as they dont have too much pain, you can kill them and eat them. Healthy young animals that would live for years, killed for your eating pleasure. Yep… you care? …. sure….

Of course Barnaby Joyce is out there saying that we shouldn’t offend the Indonesians in this matter. Well Barnaby, the Indonesians offend me or is that un-Australian of me?

I don’t think that having a PR campaign to counter the influence of activists is bad in and of itself. Maybe if it was relied upon exclusively without trying to influence the Indonesian customer base as to how the animals should be treated…

Certainly climate scientists could do with the support of a decent PR program to counter denialist activists.