Last Bets: which brand of poker machine are you?

Poker machine themes play an important part in conditioning players to gamble and there are millions of dollars being invested by the big companies every year to find the next big thing. So which brand of machine suits you?

You’ve got 20 bucks to flutter on the pokies. You’ve made it to the local pub. The next step: choose a machine.

You gravitate towards the Turtle Treasure, with its cute Disney-esque sunken-treasure motifs. But you hesitate. The hunting-themed Black Rhino has caught your eye — you’re sold on the palette of deep safari reds, much more appealing than the Turtle’s bright aqua colours. Manly, even.

It’s a question that poker machine developers spend big bucks trying to answer: which brand of pokie speaks to you? And why?

While they may seem cartoonish and tawdry on the outside, these themes play an important part in conditioning players to gamble. And millions of dollars are being invested by the big companies every year to find the next big thing.

According to the Productivity Commission, Australians poured almost $12 billion into electronic gaming machines (EGMs) across pubs, clubs and casinos last year. When compared with total gambling activity, they are far and away the nation’s favourite way to have a punt. So what makes them so appealing?

Dr Charles Livingstone, from Monash University’s Department of Health Social Science, has developed research into the themes employed by manufacturers to get people playing their machines.

He also happens to be in possession of a Dolphin Treasure, one of most popular poker machines in the country. 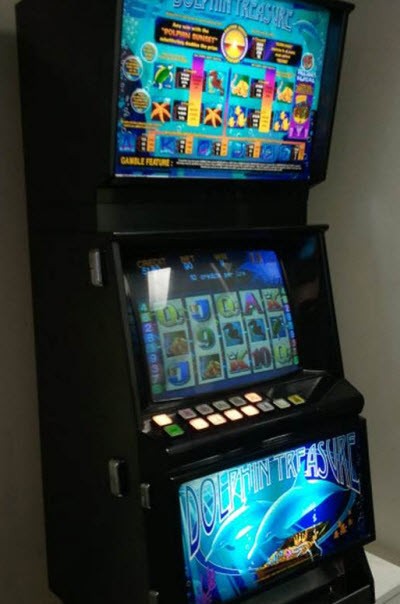 Dr Livingstone and his team purchased the Dolphin in order to study the machine’s game maths — the rate at which they pay out. No longer in service (thanks to a government permit forbidding Livingstone to profit from it), it’s feasible the retired machine brought in more than a million dollars during its tour of duty.

Livingstone told Crikey a machine’s brand can be very important to players: “If someone’s favourite machine isn’t available, then quite often they will leave and head for another venue.”

In research commissioned by the South Australian Independent Gaming Authority, Livingstone found two of the most popular pokies in that state were the Dolphin Treasure and Shogun machines.

According to a study released last year by Gambling Research Australia, the most popular themes for gamblers relate to luck or winning money (27%), Egyptian and wildlife nature topics (each 15%) and themes of mystique and magic (11%). Problem gamblers, it reported, are more likely to place importance on a machine’s theme — preferring mystique, love or Asian-themed EGMs.

While the study also found that far-and-away the most appealing characteristic of a machine was whether it had been “lucky in the past”, it also said the impact of branding could not be discounted.

As well as hiding the seriousness of what lurks beneath, Livingstone says poker machine themes like Dolphin Treasure provide a feeling of escapism from everyday life. He also says different themes appeal to different segments of the gambing market and will cater to their needs:

“Games with identical game maths but a different theme are commonly much less successful than the original games from which they’re derived,” he said. “Suggesting that the careful marrying of game maths and theme is a critical element of game design.”

These machines will often pay out in ways that cater to that market, says Livingstone. Machines like the Dolphin Treasure — such as the Indian Dreaming, with its pseudo-spiritualistic theme — offer small and regular payouts to keep players interested.

The key to this kind if appeal is achieving maximum time on the machine, says Livingstone. A risk-averse, middle-aged female poker player would prefer to stay on a machine as long as possible, rather than bust out early. 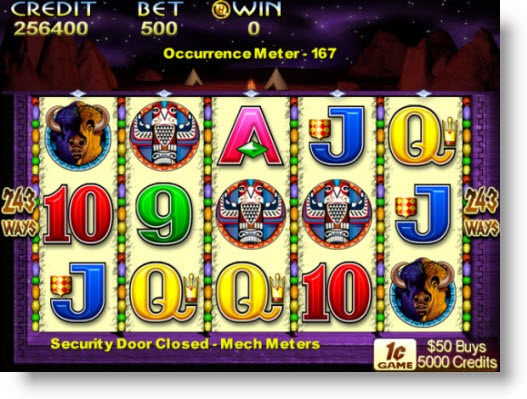 These are the big bet machines, typically offering a $1 minimum stake for one spin, and are usually aimed at a younger, more aggressive gambling clientele. An example of this is the Shogun (or Shogun 2), which is a more macho-styled machine and will pay out less often but in bigger amounts.

Other similarly branded machines include Taipan, Spartan, Heavyweight Champion and King of the Castle.

Mayne: inside the pokies trial as judge takes a stroll down to the Crown gaming floor

It strikes me there are several parallels between pokies and cigarettes (addictive, demonstrably harmful with prolonged use, legal though restricted availability, governments dependent on revenue…). Could the solution to excessive pokie use be similar to that which has proven successful for cigarettes as well? I wonder how they’d go if all machines were compulsorily drably and generically packaged, say in shades of beige, with 15 cm-high black lettering saying ‘VOLUNTARY TAXATION MACHINE’.

Ye gods, today Crkey informed me that poker machines now have names and themes. This is the sort of news that nobody could make up.

There should be one generic machine called Effwit.

To get serious, I suspect Pokie makers spend far, far more money on advertising and marketing than they do on making the buggers. It’s relatively easy to make a generic poker machine, with a internal template for manufacturers to insert images to beguile the watcher.

Populating the template is something else again. It takes a special sort of mind to populate them with the bland sort of images designed to appeal to middle aged women. Make it a little bit exciting, but not TOO exciting. “Indian Dreaming” is a great example, with its buffalo and totem poles. But anyone who thought of anything more controversial or dangerous to display – a dead General Custer, a dripping scalp, a smallpox blankets – would be sacked.

Painting pokies beige would be an excellent idea.