New government reports found a "worst-case scenario sea level rise of 1.1 metres" within 90 years would have a devastating impact, with as much as $266 billion worth of potential damage, writes David Spratt, climate change analyst and author of Climate Code Red.

Last weekend, the Australian government released the latest in a series of reports documenting the possible impacts of climate-change-induced sea-level rises (SLRs) on Australia.

It found a “worst-case scenario sea level rise of 1.1 metres” within 90 years would have a devastating impact, with as much as $266 billion worth of potential damage and loss to buildings and infrastructure.

This upper bound of 1.1 metres is used consistently by government. Inundation maps use three simple sea-level rise scenarios for the period about the year 2100: low (0.5m), medium (0.8m) and high (1.1m).

The big problem is that 1.1 metres is the wrong figure by a wide margin, with serious implications for the efficacy of the risk management and planning such research should underpin.

In releasing an earlier report, Senator Penny Wong told ABC Insiders on November 19, 2009  that “1.1 metres …  is about the upper end of the risk”. But the report said:

“Recent research, presented at the Copenhagen climate congress in March 2009, projected sea-level rise from 0.75 to 1.9 metres relative to 1990, with 1.1–1.2 metres the mid-range of the projection. Based on this recent science 1.1 metres was selected as a plausible value for sea-level rise for this risk assessment”.

So a mid-range projection from the government’s own report in 2009, based on the peer-reviewed science, transmuted into a peculiar creature, a “plausible value”, and now two years later “is about the upper end of the risk”, which the Department of Climate Change knows to be wrong, as the literature also demonstrates. 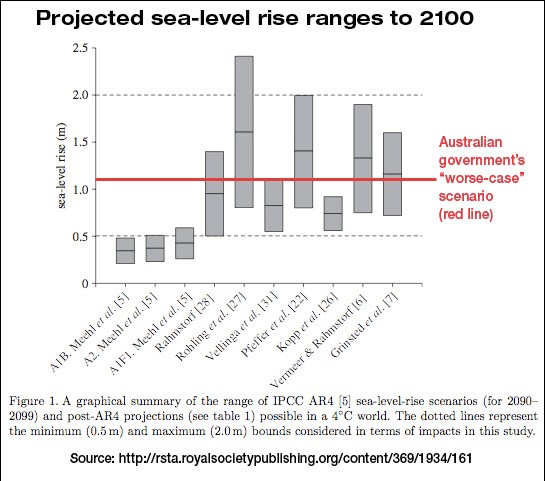 As Ross Garnaut has noted, climate science projections have sometimes been reticent when compared to observations. The 2007 IPCC report excluded the impact of melting ice-caps from its now-obsolete sea-level figures, and recent satellite data shows Antarctica and Greenland losing ice mass at an increasing (and possibly exponential) rate.

Dr David Carlson, director of the International Polar Year Program, says a “very plausible outcome” is a metre or more of sea level rise in this century from Greenland alone. And the West Antarctic glaciers also appear particularly vulnerable.

So what difference would a metre make? A huge amount. The damage to buildings and infrastructure impacted by a 2-metre rise and associated storm surges is likely to be more than double the $266 billion figure established in the recent report, and it seems extremely foolish to neither recognise that possibility nor plan accordingly.

Sensible risk management requires an assessment of the full range of possible outcomes, their impacts and consequences; not the average. By not doing so, the government is failing in its fiduciary duty. Communities and business, infrastructure authorities and local government planners are relying on the government’s assessment of sea-level rise risk to plan their future and make contingency plans.

By simply ignoring the available science and failing to assess the risk associated with the full range of possibilities, the government may leave itself open to huge litigation should reality turn out to be closer to the scientists’ upper bound that the government’s “plausible value”.

Or perhaps we can leave it all to Senator Ron Boswell, who told an estimates hearing in February: “Being someone who has spent his life in boats, since I was a kid, I haven’t seen any sea level change.”

If the world followed Australia’s lead on climate change, humanity would be dead

Ah yes Ron Boswell … the drinking man’s Barnaby Joyce.
I spent a bit of time this week looking at what a 1.1 meter rise would do to the world’s largest coal port – Newcastle NSW – where we are busily doubling the port’s capacity with another coal loader built on the very flat, very swampy Kooragang Island. The short answer is: Kiss it all goodbye. And the rail link, the town centre, much of the suburbs around it … the lot…
Maybe the threat to harbourfront property will spur the masses into action… talk about an assault on Our Way of Life. But I doubt it.
Not that I think a piddly little carbon price is going to do much in the global scheme of things either to be honest. I’m afraid I’m most pessimistic about all this.
How does any national government tackle a global problem that a significant part of the population either doesn’t understand or just wants to pretend away?
Still at least a carbon tax gives us the idea we’re doing something when really we don’t want to do anything at all. Its main selling point seems to be how little impact it will have. Far too little, Far too late.
Cheer me up someone.

Given that the sea will rise steadily across several years — even in the event of an ice cap surge — we do have the option of continuous adaption.

Vulnerable buildings and infrastructure could be built demountable, rather than monolithic. Then, as time runs out for each locality, infrastructure, industrial areas and suburbs would be able to gradually migrate uphill.

Entrepreneurs could note that demountable structures are transportable and often mass producible. There must be big bucks in it when the potential market is so global.

Yairs Roger. Was that meant to cheer me up?
A sort of caravan park future? Grey nomads all.
Possible, probably even inevitable but not pleasant.
And we haven’t even mentioned the obscene amount of tax revenue we’ll be devoting to razor wire just to clad our crumbling coastline and keep out those Bangladeshis, Kiwis and other queue-jumping landless illegal foothold seekers who’ll be treading water out there whining for our hospitality…
Forget the prefabs. Learn from history. Razor wire, Roger, that’s where the big money will be. If we get in early we could make a killing.

How hard would it be to return Port Phillip Bay to its original state? Ie, an area not connected to the oceans? Surely its possible to extend Point Nepean across to Queenscliff and hey presto – no flooding problems in Melbourne.

How hard would it be to build accross the Sydney Heads? Or build around Moreton Bay to protect Brisbane? Or across the mouth of the Swan to prevent Perth being flooded? There are actually several work arounds for Australian cities that should dispel horror stories about Brighton and St. Kilda being underwater for instance!

Its just never going to happen.

If we can’t do that over a century I would have to say I’m very disappointed with our skills and abilities as a country.