Revelations that Yemen’s president Ali Abdullah Saleh was more gravely injured than previously reported have cast doubts over his ability to resume leadership in coming days, as the house of acting-president Abdu  Rabu Mansour Hadi was targeted by protesters.

Reports on Monday said Saleh would return home from a Saudi hospital within days, after an attack on the presidential palace in Sanaa on Friday which also injured several top officials. But diplomatic sources have now said the president received burns to 40% of his body, while Al-Jazeera Arabic TV quoted medical sources who said his injuries would require cosmetic surgery and weeks of recuperation.

The New York Times has quoted a Western official, speaking anonymously according to government rules, as saying: “His face was quite charred. The burns are serious; he is not as well as his aides are portraying it.”

The explosion was originally thought to the result of a mortar or rocket attack from outside the palace compound, but investigators are now considering the possibility it was the result of an explosive device planted within the palace.

In Saleh’s absence, fighting has intensified in the city of Taiz and along the Saudi border. The Yemen Post also reported government forces yesterday thwarted two attempts to attack the Sanaa residence of acting president Abd Rabu Mansour Hadi.

A tweet by self-described Sanaa-based researcher @WomanfromYemen described the situation at Hadi’s residence this morning:

“the independent youth who marched today in #sanaa & camped infront of VP’s [vice president’s] house are calling ppl to join them for support #yemen.” 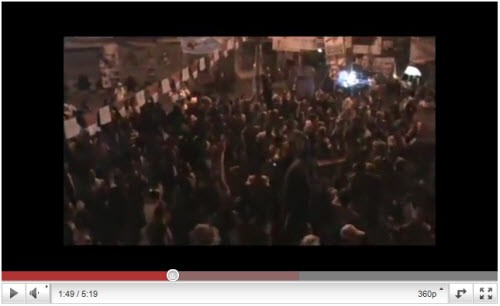 Those opposing Saleh’s 33-year rule have been active since January, and have intensified their actions since Saleh repeatedly stalled a transfer of power to a national unity government. But the attacks sustained by the president on Friday saw presidential powers transferred to Hadi.

The Guardian reported Mohammed Qahtan, spokesman for the Joint Meeting Parties, as saying: “The coalition backed the transfer of presidential powers to Hadi, but as only a temporary rather than a permanent measure.”

Elsewhere in the Middle East, residents fled as government tanks moved in on the Syrian town of Jisr al-Shughour. On Sunday the town of 41,000 people was the site of an uprising that the government said ended in the deaths of 120 soldiers.

But it was reported residents of Jisr al-Shughour denied the claim, with one video showing a woman who said the fighting was sparked by security forces’ attack on a funeral for victims of previous attacks.

The violence comes as Britain moves towards a push for a UN Security Council resolution to condemn government crackdowns against protesters in Syria.

The Guardian reported the proposal, voiced by British foreign secretary William Hague, “would bring action taken against Syria in line with measures imposed on other countries in the region facing political upheaval. However, they fell short of the no-fly zone mandated against Libya under a resolution passed earlier this year that launched a NATO bombing campaign against Muammar Gaddafi’s forces.”

As the COVID-19 crisis continues to change the fundamentals of our society, businesses and governments are already grappling with the issues of a post-pandemic world.

Good morning, early birds. Scott Morrison intends to push for a technology target rather than agreeing to net-zero emissions by 2050, and the Australian media has given Holden a send-off. It's the news you need to know, with Chris Woods.

The death of Abu Bakr al-Baghdadi won't deliver 'Saddam spider hole' buzz for American audiences — but it's a hell of a callback.