Vigilante call … Apple in the clouds …

The Gold Coast came to a standstill this morning for the funeral of slain police detective Damian Leeding. But that's not enough for local paper the Gold Coast Bulletin. Plus other media news...

People power or paper power? The Gold Coast came to a standstill this morning for the funeral of slain police detective Damian Leeding. But that’s not enough for local paper the Gold Coast Bulletin, which seemed to bay for revenge on its front page today. The News Limited tabloid urged its readers to “TAKE THE OATH” and turn vigilantes to hunt down the killer:

“You have been deputised to protect this great city and help put the thugs in jail. Report for duty today at the funeral of Damian Leeding. Show your support and help win back our town.” 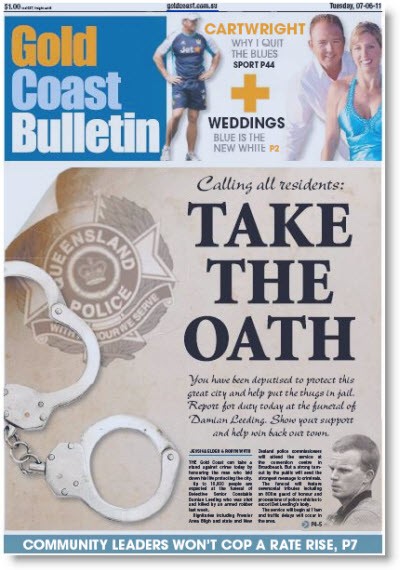 Perhaps the paper was inspired by its big brother up the M1. The Courier-Mail loudly declared victory on its front page this morning after a week-long campaign to slap GPS devices on convicted paedophiles released into the community:

MORE than 6000 Queenslanders called for our most dangerous sex offenders to be tracked with GPS technology — and Premier Anna Bligh has listened.

Readers from across the state were quick to join the The Courier-Mail’s campaign over the past week, signing a petition demanding the State Government fund upgraded tracking devices. 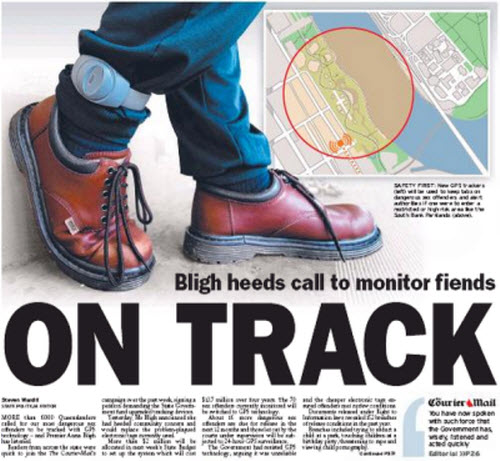 The paper’s editorial delcared it a “victory for people power”: “One of the important roles of a newspaper such as The Courier-Mail is to provide a voice for those sometimes unable to speak up for themselves… The impressive public response to our GPS-tracker campaign, and the Government’s quick response, reminds us all of just what can be achieved when we speak as one.” People power or paper power? — Jason Whittaker

Apple goes to the cloud. Apple has unveiled a suite of cloud-based applications, a completely revamped operating system for the iPhone and a huge number of updates to Mac OS X at the opening day of the World Wide Developers Conference in California, ending years of speculation about the company’s new cloud-based services. Revamped notifications, Twitter integration and a new lock-screen design are just some of the updates included in the upcoming iOS 5 software, but the biggest announcements were around iCloud, Apple’s new cloud-based service model.

Chief executive Steve Jobs once again took to the stage to reveal the new features, despite his medical leave, although most of the announcements were made by the senior vice presidents. The iCloud suite — which is completely free — replaces MobileMe entirely and allows users to upload documents, photos and other pieces of data such as iPhone back-ups into the cloud. — Patrick Stafford of Smart Company

Front page of the day. New York Democrat Anthony Weiner, representing the state’s ninth congressional district, has found himself embroiled in a Twitter controversy whereby s–xually suggestive photographs of himself have been sent to numerous women. Unfortunately his last name is Weiner. Step up New York tabloids… 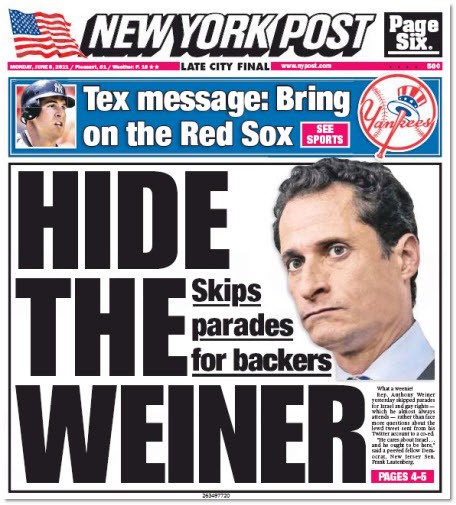 “A blogger whose frank and witty thoughts on Syria’s uprising, politics and being a lesbian in the country shot her to prominence was last night seized by armed men in Damascus. Amina Arraf, who blogged under the name Amina Abdallah, holds dual Syrian and American citizenship and is the author of the blog A Gay Girl in Damascus, which has drawn fans from Syria and across the world.” — The Guardian

Memo to grumpy editors: PR is not the enemy

“In this guest post, Fleur Brown, CEO of public relations agency Launch Group, takes issue with a piece written in the Australian that argued that editors are grumpy with PR people for good reason.” — mUmBRELLA

“Amazon, AOL Video, Gowalla, Foursquare, Meetup and Plancast are the newest social tools to be integrated with Twitter.com, allowing users to access more multimedia content without leaving the site.” — Mashable