Rudd MIA on asylum seekers — but he said he would be

In Rudd's defence we should remember what he said in his speech announcing after being challenged last year for his leadership...

He gave fair warning. Dealing with our neighbours to try and curb the inflow of boat people is currently, perhaps, Australia’s most important foreign policy question — certainly for the Labor Government it is the most damaging.

The kind of task that a Foreign Minister would normally take charge of. So where is Kevin Rudd as Prime Minister Julia Gillard and Immigration Minister Chris Bowen flounder around talking with Malaysia and making fools of themselves and the country? Off in Europe, thank you, solving who knows which problems of the world.

But in Rudd’s defence we should remember what he said in his speech announcing after being challenged last year for his leadership:

If I am returned as the leader of the party and the government and as Prime Minister then I will be very clear about one thing — this party and government will not be lurching to the right on the question of asylum-seekers as some have counselled us to do.

They have been a fantastic team but we’ve gone into some heavy weather of late and a few people have become, shall I say, a little squeamish at that. I’m not for getting squeamish about those things, I am about continuing the business of reform and providing good, strong, proper government for the people of Australia, the people of Australia who elected me as Prime Minister.

(Question: Mr Rudd, you mentioned asylum seekers and the ETS, are you talking about a change in policy in both those areas?)

I’ve been very plain about what I said before and you’ve heard me say things about asylum-seeker policy recently, I believe it is absolutely wrong for this country to and absolutely wrong in terms of the values which we hold dear, to get engaged in some sort of race to the right in this country on the question of asylum-seekers. I don’t think that’s the right thing to do. That’s the direction the Liberal Party would like to take us – under my leadership we will not be going in that direction.

Scientist Geraint Rees, from University College London’s Institute of Cognitive Neuroscience, you see, at the urging of  Colin Firth, conducted a study and found that Liberal and Conservative attitudes were associated with thicker areas of parts of the brain.

The Oscar winning actor had suggested the study when a guest editor on the BBC’s Radio 4 Today programme in December. Now Colin Firth, along with Radio 4’s Tom Fielden, is listed as a co-author of the article “Political Orientations Are Correlated with Brain Structure in Young Adults” published in the journal Current Biology. 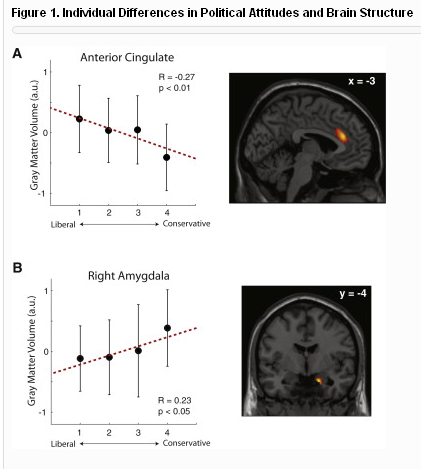 The summary of the article explains that substantial differences exist in the cognitive styles of liberals and conservatives on psychological measures.

“Variability in political attitudes reflects genetic influences and their interaction with environmental factors. Recent work has shown a correlation between liberalism and conflict-related activity measured by event-related potentials originating in the anterior cingulate cortex. Here we show that this functional correlate of political attitudes has a counterpart in brain structure.

In a large sample of young adults, we related self-reported political attitudes to gray matter volume using structural MRI. We found that greater liberalism was associated with increased gray matter volume in the anterior cingulate cortex, whereas greater conservatism was associated with increased volume of the right amygdala. These results were replicated in an independent sample of additional participants. Our findings extend previous observations that political attitudes reflect differences in self-regulatory conflict monitoring and recognition of emotional faces by showing that such attitudes are reflected in human brain structure.

Although our data do not determine whether these regions play a causal role in the formation of political attitudes, they converge with previous work  to suggest a possible link between brain structure and psychological mechanisms that mediate political attitudes.”

The comeback with a golden oldie. Glenn Milne is back at The Oz after his period in purgatory with the ABC’s The Drum and it is as if he never left. A return with a column on leadership speculation, no less. Glenn’s normal anonymous Labor insiders are still with him and giving Julia Gillard until December to stop the opinion polls rot or there will be a change at the top.

A special crocodile snippet. It was not really an entrant in our croc of the year front page contest. Just a page one pointer.

And the beast itself was not the real saltie thing — only small and of the fresh water variety. If the bream fisher had more clothes on it would not even have deserved page three. Still, we had to put the matter on the record because of the crocodile’s name.

What’s in a name. Just a little something extra for political candidates to think about. Choose your name in Chinese characters with care.

But his opponent, Richard Ulmer, translated his last name into Chinese phonetically, as Ao Ma. And what does that mean in English? “Australia horse.”

Mr Correct and Fair apparently polled better in a district with a considerable number of Chinese speaking voters.

I see KRUDD has jetted off again. What a joke on the world stage he is

Re brain structure. Does the right amygdala whither and the anterior singulate flourish as people age? How else can we explain the conversion of radical young lefties to curmudgeonly old conservatives? Of course you are a notable exception, Richard.