Tasmania ABC TV staff have called for managing director Mark Scott to provide greater certainty on the future of television production in the Apple Isle. Plus other media news of the day.

Collecting concern over ABC Tasmanian TV. Tasmania ABC TV staff have called for managing director Mark Scott to provide greater certainty on the future of television production in the Apple Isle. The missive comes after Aunty announced last week that Tasmanian-produced Collectors would be “rested” after its current season.

In a letter sent last week to Scott, staff say they are “angry and upset” about the current lack of certainty surrounding TV production in Tasmania and what that could mean for local jobs. The letter, which has been signed by 41 members of the production unit, claims production has fallen in Tasmania over the last four years from 21 hours per year to a proposed five hours:

“It is clear that the skill and expertise that has been built up over many years has been continually and systematically eroded and is now in danger of being lost completely.  The range and scope of branch production has been constantly reduced along with the steady loss of staff. We fear that if this trend is allowed to continue, production apart from local sport and news will cease all together.”

Collectors executive producer Colin Grubb confirmed last week that Collectors would go into hiatus at the end of filming of its current season, with episodes set to run to September. Grubb gave no indication as to how long the show would sit on the sidelines or what the plans were for a new locally-produced national show.

Staff say there is scant information surrounding the mooted new show and that they are being expected to produce it on top of winding up Collectors under “difficult circumstances”. “There seems no plan for continued production beyond the pilot — if in fact it is even commissioned,” the letter says. “Nor does there appear to be any cohesive process to ensure the ongoing planning for a continuous production stream in this state.”

The ABC did not return Crikey‘s request for comment this morning. — Tom Cowie

The 7.30 viewers who left with Kerry. No wonder there are mutterings of dissent at the ABC’s 7.30 program and in other parts of Aunty’s news and current affairs fortress. The program’s ratings have sunk more than 18% since the new format started in March, and are down 11% from the same period last year.

There are a couple of provisos: this year there are three extra digital channels (Eleven, GEM and 7Mate) which may have stolen some viewers, but 84,000 a night? The fall isn’t exclusive to 7.30 — all news and current affairs programs have lost viewers this year because of the extra digital channels which are among the more popular. And there is another factor: the loss of Kerry O’Brien, who “retired” to be host of Four Corners. O’Brien was an ABC institution and following people like that in TV is fraught with dangers. So it is with Leigh Sales and Chris Uhlmann.

The show’s audience peaked in 2008 with 886,000 viewers, but that was before the new digital channels and the introduction of a new ratings system. O’Brien suffered a nasty loss of audience in 2010 as a result. That new measurement method of live and live as recorded (meaning programs are counted whether they are recorded and replayed the same night) provides a distortion. We won’t have properly comparative figures for that and the extra digital channels until after January 11 next year (the first anniversary for Ten’s Eleven). Despite this the loss of viewers is palpable at the ABC and morale at 7.30 isn’t high. — Glenn Dyer

Who’ll run Australia Network on Thursday? The decision from the federal government on the new contract for the Australia Network is overdue and has to be made by Wednesday, June 8. That’s the absolute deadline: the contract ends on August 8 for the ABC, which has bid in competition with Sky News (part-owed by Seven, News Limited and BSkyB of the UK).

No explanation as to why it has taken so long to get a decision, but some suggest the identity of the foreign affairs minister might be a clue. Has Kevin Rudd been in Australia long enough to sit down and assess the tenders and make a decision with his fellow cabinet members? Sounds like yet another Rudd-controls-everything story.

There were media reports at the start of May in The Australian that the decision would occur on May 1. The paper quoted an email from Bruce Dover, Australia Network CEO, to that effect. As ABC CEO Mark Scott told Senate estimates late last month:

“The contract is up on 8 August and I think in the tender document 8 June was indicated as a final indicative date for all negotiations to have been completed. There are continuity issues on the service that we are mindful of and we have communicated to the department. But we are waiting to hear final confirmation of the outcome… The critical date is 8 June. I think there was an expectation that by early May those final negotiation processes would have commenced. That has not happened at this point and we wait for advice.”

Spectator‘s tale of two killers. Who gets to be forgiven for youthful stupidity, or worse, and who doesn’t? It’s an interesting question posed by the Oz Spectator, which last week had yet another article about David Hicks, and how shocking it is that he be allowed to speak. Yes of course — who would be so obtuse as to imagine that violent intent could be just forgotten? Well, the Oz Spectator for one, which in the same issue has a rapturous review of a new novel by Peter Kocan.

Kocan is an excellent writer — whose other claim to fame is as Australia’s most prominent would-be political assassin. In the mid-1960s, as a disturbed young man, riled up by anti-communist rhetoric, he attempted to shoot Labor leader Arthur Calwell. Committed to an asylum for some years, he became a writer and was eventually awarded Australia Council grants, which bore fruit in two brilliantly cool novel/memoirs, and several volumes of poetry. Had the right-wing shouty squad been around at the time, the grant and possibly the books never would have happened.

Kocan is assessed on the strength of his work, as he should be, not on a period of derangement; but that assessment is so easily granted him because most of his friends and allies are from the political Right. Clearly, it’s not that you try to kill, but who, that matters. — Guy Rundle

Front page of the day. While our own front pages are dominated by the refugee swap with Malaysia today, the top story in Malaysia’s own Sunday Star also concerned displaced people. But in this case it’s 200 villages facing eviction by their own government. 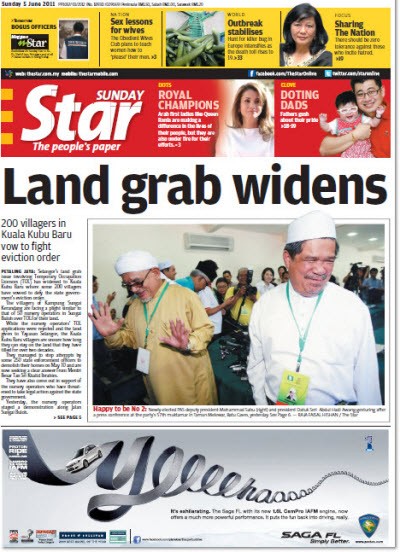 “It is fitting, in a way, that Keller’s resignation comes so soon after another departure that ended an era: the killing of Osama Bin Laden. Keller oversaw the bulk of the paper’s coverage and operations in the period between September 11, 2001 and Bin Laden’s capture, a period where questions of war and surveillance framed the national debate. And it seems clear that Keller’s journalistic legacy should and will be defined by how he and his paper met the challenge of this long war.” — Columbia Journalism Review

“The Archbishop of Canterbury will guest edit this week’s issue of the New Statesman. Dr Rowan Williams has commissioned a wide range of essays, articles and reports, as well as interviewing Iain Duncan Smith and writing the leading article for the left-leaning current affairs magazine.” — The Guardian

Ad agency behind Say Yes campaign: it’s not all about Cate

“The casting is part of the message. Cate was Sunday’s story, but by Monday you had Dick Smith; you now have religious leaders, you have business leaders, economists, and when you add this up it is many hundreds of people and you are not trying to create an ad campaign here, you are trying to create a movement.” — The Australian

“News Corp. is moving toward a deal for Myspace, with a strategic partnership appearing more likely than a straight sale, according to people familiar with the matter.” — Wall Street Journal

Social media advertising to prove (or disprove) it’s worth

“Social media has struggled for years to demonstrate return on investment on the same analytical playing field as more established media. Now, Marketing Evolution, which has been working on cross-media analytics for more than a decade, is joining with media planning software provider Telmar to release an ROI tool they say will do just that.” — Advertising Age

Ben McCormack pleads guilty to child pornography charges. And other media tidbits of the day.

The terrible history of Roger Corbett’s ‘separate but equal’ philosophy

Corbett's justification for denying equal marriage rights to LGBTI people, you see, is an old, old sociological theory, one you don’t hear expounded these days outside a One Nation rally.

Extra digital stations made no impact on my decision to kick the 7.30 (Report) habit once Kerry O’Brien left. Sales and Uhlmann are lightweights.

And the set is annoying, particularly the ever-moving background which, one can only suppose, is there as a safeguard to keep viewers awake. If that is its purpose, it’s been unsuccessful.

@Zut you can’t have been watching closely enough, the Canberra-headshot backdrop was a logo of the front of the hill and the line glowed in a spooky endless-worm screensaver all ‘da time. Back in the kezza days too I might add

Looks like you’ve just compounded my point about Kerry O’Brien’s presence: I was so interested in what he was presenting (or extracting from the interviewee) that the background failed to even register.

Yeah kerry gave the show soul, the attempts at slickness are empty and chris uhlmann is no where near as nimble on his feet and as sharp as kerry in interviews
I used to love the show now I can take or leave it