Global warming above 2° so far mitigated by accidental geo-engineering

According to NASA’s Goddard Institute of Space Science climate reports, global warming is already committed to a rise above two degrees. The magical two degrees ceiling determined by governments is only holding thanks to effective, if unintended, geo-engineering by sulphur dioxide emitted from industry, holding global warming to about half of what it would be otherwise.

Recent publications by Hansen and his research group indicate the rise of atmospheric energy (heat) level due to greenhouse gases and land clearing are committed to +2.3 degrees (+3.1 Watt/m2), currently mitigated by the transient effect of sulphur aerosols and the cooling effect of the oceans.

Sulphur dioxide is emanated from coal, oil and the processing of minerals (breakdown of sulphides to produce copper, zinc, lead and so on), and from other chemical industries. It combines with water in the atmosphere to produce sulphuric acid, which (being heavier than air) condenses and settles to the ground within a few years.

The aerosols are short-lived, i.e. on time scales of up to a few years, but since they are continuously emitted from industry the overall level is increasing as burning of fossil fuels is rising.

The continuing emission of sulphur aerosols in effect constitute a global geo-engineering process without which the atmosphere would warm by another 1.2 degrees (1.6 Watt/m2) above the present level, resulting in near-doubling of global warming (Figure 1): 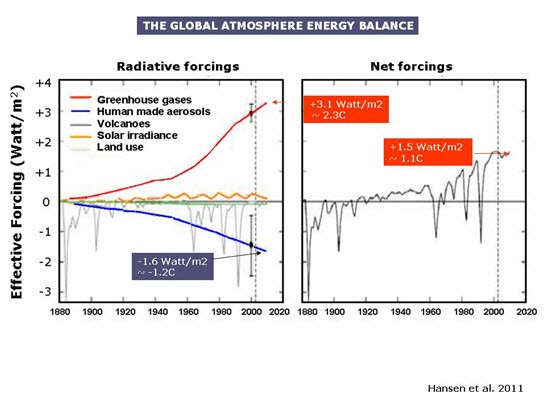 Had it not been for the cooling effect of the short-lived (a few years long) sulphur aerosols, the internationally agreed maximum temperature ceiling of two degrees would have been transcended.

Cleaning of aerosol emissions, required in some countries, would result in thinning of the aerosol shield and thereby further warming.

At present measured temperature rise since 1880 of approximately +0.8 degrees is lagging behind +1.1 degrees warming (mitigated by sulphur aerosols), mainly due to the buffering effect of the oceans. The temperature rise lag period is not known but has been estimated as 35 years.

Whereas according to the IPCC AR4 (2007) mean global land/ocean temperature since 1880 has risen by about +0.8C, this translates to more than +4C rise in the polar region of northern Canada, Greenland and Siberia (Figure 2). 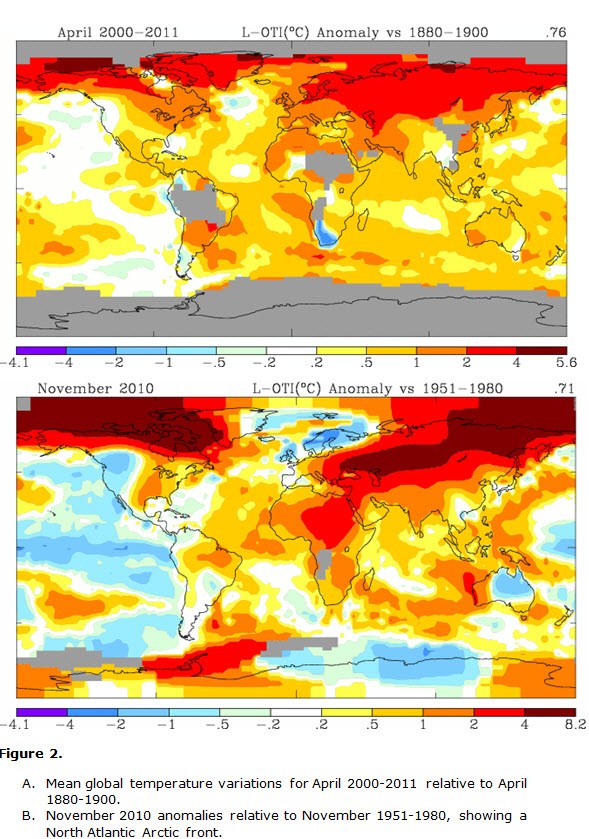 The warming triggers amplified ice melting due to the albedo loss/infrared absorption feedback effect, which has accelerated between 2002 and 2010 (Figure 3): 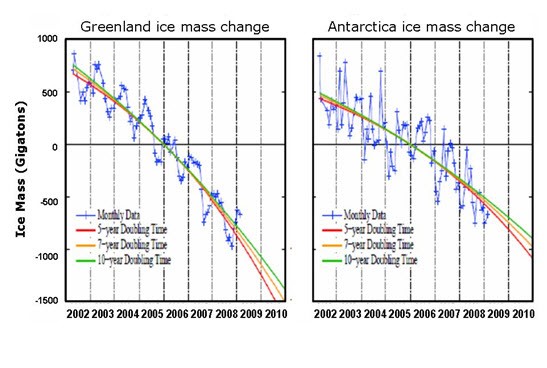 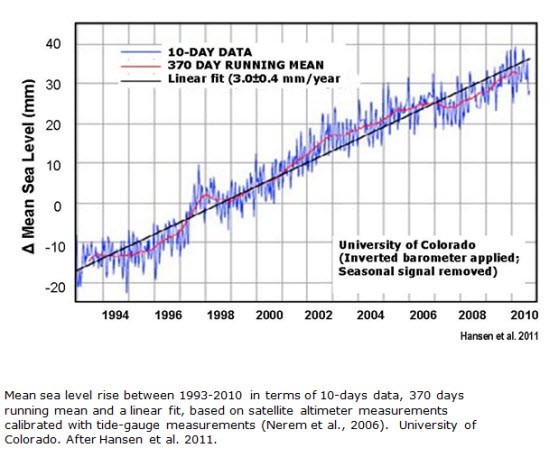 The disappearance of sea ice from large parts of the Arctic Ocean leads to increased evaporation and to the advance of cold moist fronts into the north Atlantic with consequent snow storms.

Before the 2009 Copenhagen conference the European Union has obtained the agreement of relevant partners, including China, India, Russia and the United States, to commit to an upper two-degree ceiling on further rise in mean global temperature.

However, a rise to two degrees may lead to tipping points in the atmosphere/ocean system.

Current CO2 levels have risen to 393 ppm. The relation between atmospheric CO2 levels and global warming is stated by the NASA/GISS climate science group in the following terms:

“Decreasing CO2 was the main cause of a cooling trend that began 50 million years ago, large scale glaciation occurring when CO2 fell to 425±75 ppm, a level that will be exceeded within decades, barring prompt policy changes. If humanity wishes to preserve a planet similar to that on which civilisation developed and to which life on Earth is adapted, paleoclimate evidence and ongoing climate change suggest that CO2 will need to be reduced from its current 385 ppm to at most 350 ppm. The largest uncertainty in the target arises from possible changes of non-CO2 forcings. An initial 350 ppm CO2 target may be achievable by phasing out coal use except where CO2 is captured and adopting agricultural and forestry practices that sequester carbon. If the present overshoot of this target CO2 is not brief, there is a possibility of seeding irreversible catastrophic effects.”

With CO2 emissions rising to ~28,000 million tonnes per year by 2010, increasing atmospheric levels by ~2 ppm/year, with a total CO2-e (which includes CO2 plus the equivalent effect of methane) of >460 ppm, the NASA/GISS study implies global warming committed to reach above two degrees once the aerosol effect dissipates (Figure 1).

Had the proposed Australian reduction of 5% in the rate of carbon emissions by 2020 relative to 2000 been adopted worldwide, global emissions would be reduced from ~24,000 million tonnes/year to 22,500 million tonnes/year, hardly causing a dent in the current trajectory towards levels at which the polar ice sheets are further destabilised (Figure 3).

The increased level of energy in the atmosphere/ocean system is resulting in a series of extreme weather events around the globe.

It is not known whether even deep reduction in carbon emissions will be sufficient to stem the amplifying feedbacks associated with greenhouse gas warming and ice/melt water interactions.

Where’s Tamas Calderwood and his attempts at rebuttal of Andrew Glickson’s facts?

Why the different bases to indicate the warming – surely the data should be compared to the long term trend.
I find it noteworthy that the November 2010 data shows cooling over much of eastern Australia, you would have expected warming surely with the onset of one of the strongest el Nina events ever recorded.

Sorry, that of course should read one of the strongest la Nina events.

Sorry, that of course should read one of the strongest la Nina events.

La Nina causes rains on the East coast of Australia. Not sure where you get the warming idea from – La Nina is generally associated with cooler global temperatures – as we have seen in Australia in late 2010, early 2011.

I am aware of course aware of the related rain in eastern Australia as a result of a la Nina event. The point is that the waters of the south American coast are a lot colder than normal (and warmer than normal with an el Nino event.) the colder waters are balanced by increased convection over east Australia caused by warm than normal air masses. That was my point above.