If I’m subject to a law, I generally like to know how I can avoid breaking it, writes Aidan Wilson, of Crikey language blog Fully (sic).

Ted Baillieu wasted no time in dragging Victoria back to the 1950s; increasing public funding for non-government schools at the direct expense of government schools, vetoing a Yarra City Council’s decision to set up a safe injecting room in Richmond, preferring instead to harass drug addicts with a higher police presence, and telling his caucus that they’re no longer required to acknowledge traditional custodians in a welcome to country.

The latest throwback to the postwar era though, is particularly stupid.

I personally find it unbelievable that Victoria still has legislation against offensive behaviour and “obscene” language. Being curious, I went to the legislation and found the relevant section (17):

17. Obscene, indecent, threatening language and behaviour, etc. in public
Any person who in or near a public place or within the view or hearing of any person being or passing therein or thereon-

shall be guilty of an offence.

The ostensible reason Baillieu gives for this move is that it would free up the court system by allowing police officers the discretion to hand down fines themselves rather than having the matter go to court. In reality though, no one currently gets charged for swearing because there’s bugger all chance of a conviction (as in the Townsville case discussed here).

So this move just gives police the power to circumvent the courts and issue fines to whomever they deem to be offensive, according to the delightfully vague “community standards”.

Swear v.i. Use profane oaths to express anger or as expletives.

Well bugger me, move over speed-camera revenue, the Spring Street Mafia is introducing a new cash cow on the revenue-raising block – a potentially giant government swear box (oops, can I still say box?) at about 240 bucks a throw. Yeah, I said bucks with a B.

Mind you, it’s not all Baillieu’s fault. As Karl Quinn points out in The Age today, the Act might’ve been introduced back in 1966, but the former Labor state government can lay claim to reviving it — they’re the ones who introduced a trial in July 2008 giving police powers to issue on-the-spot fines of $238.90. The amendment to the Act now before parliament will enshrine those powers.

Surely this will lead to all sorts of funny interpretations and mass confusion.

Good luck to the coppers working at the footy … although it’s probably not going to be a problem at Melbourne games among its supporters because everyone is wearing Harris tweed jackets (with mandatory leather elbow patches), deerstalker hats and taking nothing stronger than an Earl Grey from the thermos and munching on cucumber sandwiches, while saying things such as blighter, scoundrel and vagabond (has anyone heard rapscallion at the footy?) and other upmarket sledges.

The Collingwood crowd (OK all other teams), however, may be worth a decent quid to the state coffers.

The real footy interest, however, is on the field. What happens when a player says the word f-ck (TV loves catching them out) after missing a sitter from 20 metres or yells it while grimacing after copping an accidental knee in the Jatz Crackers?

Is plod duty-bound to jump the fence and run to the player, berate him for his public display of offensive language, write him a ticket and tell him that if there’s room, to stuff it into his jockstrap? That would bring other problems into play, including adding heaps of time on and putting even more strain on this year’s depleted interchange bench.

Then there’s the odd, inadvertent but would-be fine-inducing cock-up (I’m saying it while I still can) from footy commentators. I once heard 3AW’s Bill Jacobs make a meal of “the Punt Road end” of the G … I asked him about it a week or so later. “Oh, you heard that, did you?  he said, laughing.

And commentators are always on Spoonerism alert when Karmichael Hunt is on the field. Listen to one commentator come a cropper here. Would he be liable for a retrospective fine?

Then there are things such as the hipsters who wear those poncy FCUK-labelled T-shirts. Are they gonna get a warning because they’re close to the mark or perhaps a cut-price fine because an intent to shock is there? And Country Road? Well I’m just not going there.

Bumper (I said bum) stickers are another problem. I’ve seen a few over the years that may be deserving of police attention.

This one, which I saw recently at a rural agricultural show (it was in the ute competition enclosure. Of course it was) is possibly worth a $240 fine, although the copper would be laughing his/her head (can I still say head?) off while writing the ticket: 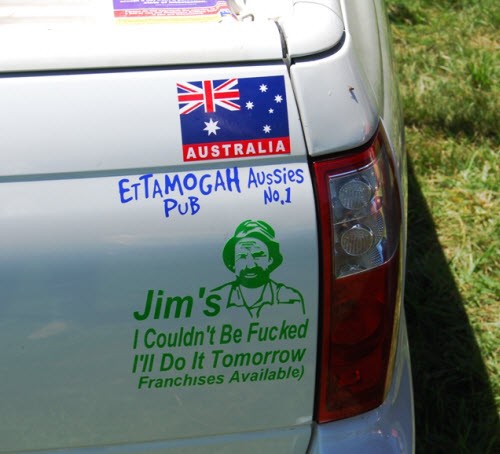 Years ago when Australia was going metric, some mates and I got a Metric Conversion Board letterhead and drafted a letter to people with imperial measure names … Miles, Furlong, etc … we did a big mailout (it cost a bloody fortune) suggesting the board representative would be calling on them to discuss a suitable metric name for them. OK, it was funny at the time. Surely the swearing laws that will soon apply … the Balls, Dicks, etc, are going have to think hard about becoming the Spheres, the Appendages, etc. Well aren’t they? I mean, by definition they’re rude.

Fair go, Ted. You’re head (there’s that word again) of the government. Give it some more thought and perhaps slowly mouth the word “café” at someone in the opposition. You may think it’s fine, but in reality, it’ll probably mean you’ll get one … if there’s a copper in the house.