The Opposition and its climate position steal the show

Tony Abbott is clearly leading the volume on television again this week -- attacking a celebrity always helps on that front.

Most of the media kept the focus for most of the week on the Opposition and its climate position, Abbott clearly leading the volume on television again this week — attacking a celebrity always helps on that front — and neck and neck overall with Gillard, with the side issue of his falling into line on cigarette packaging after the bill was clearly going to pass also helping keep the numbers up. And do you think the PM is somewhat revelling in the relative positions of Malcolm Turnbull and Kevin Rudd on this list? She would know that there’s pretty much no chance of things staying that way for long, but I’m sure she’s thanking Gaia for small mercies.

The Malaysian solution, live cattle exports, the pokies, cigarette packaging and of course the good ole carbon tax all kept the crossbenchers in the news, particularly the two with perhaps the least predictable voting pattern, Andrew Wilkie and Tony Windsor, who each had something to say on all of the above issues, plus a few more. The realpolitik of this parliament seems to be settling in, with almost every major piece of legislation up for grabs.

Barnaby was back into form with his attack on those uber-rich jetsetting Hunters Hill types (just over the river from the GPS private school he went to, so he clearly knows what he’s talking about) trying to foist their opinions on us real folk … err, that is, you real folk. And Jenny Macklin makes her occasional trip to the list thanks primarily to the pokies issue. 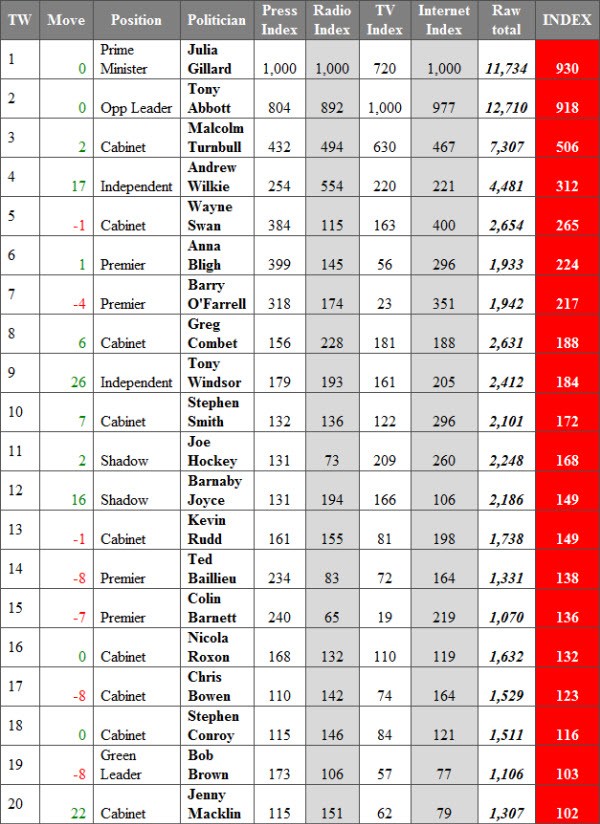 Barry O’Farrell and Andrew Wilkie still getting mixed reviews on talkback this week, but Tony Abbott’s numbers surprisingly small – not that many jumping in to support the attacks on warminista actors et al.

What do you mean he’s a politician? He’s just an enthusiast of the world game, doing his bit to further the sport he loves, despite the personal travails that he must go through to skim…I mean help, so many millions…

The 2015 Crikeys: Bronnie the most scandalous of the year

Here are the scandals that shocked and shaped us in 2015.

FIFA has become synonymous with corruption and scandal. And why should you care? Because it's your money, writes Crikey 2014 World Cup correspondent Django Merope Synge.

When did Malcolm Turnbull get co-opted into Cabinet?

Perry, he’s in the Shallow Cabinet.