In today's Media Briefs: when a picture is not worth even a few words ... The Department of Corrections ... Age news judgement under fire and more ...

When a picture isn’t worth even a few words. It’s an age-old tabloid maxim: a photograph always makes a story better. But when things start to look like conspiratorial UFO footage, as they did this morning on theage.com.au, well perhaps it’s time to try and let the words tell the story… 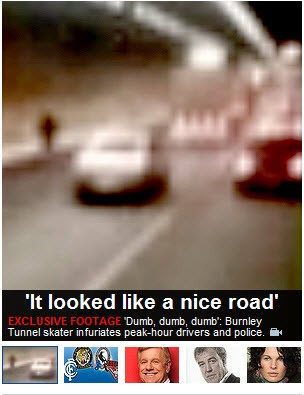 The Department of Corrections. What’s worse than not making the cut for your national Under 17s football team? Being told you you were selected on the backpage a newspaper only for that newspaper to say it got it wrong the next day. Oh, New Zealand’s The Nelson Mail, that is too cruel…

The world’s deadliest countries for journalists

“Russia and Mexico, two of the world’s most murderous countries for the press, are heading in different directions in combating deadly anti-press violence, the Committee to Protect Journalists has found in its newly updated Impunity Index. The index, which calculates unsolved journalist murders as a percentage of each country’s population, found improvement in Russia as journalist murders ebbed and prosecutors obtained two high-profile convictions. But deadly anti-press violence continued to climb in Mexico, where authorities appear powerless in bringing killers to justice.” — Committee to Protect Journalists

“The White House and news photographers have agreed to a new plan for shooting presidential speeches.Out: staged, after-the-fact photo ops. In: a single photojournalist, who will be permitted to snap the president’s picture as he addresses the nation.” — The Washington Post

“You really are a curious bunch, you readers. We’ve been observing you quite a bit recently at research groups, and one thing has become abundantly clear: there’s no such thing as a typical i reader.” — The Independent

“Men’s magazine FHM has been forced into making an apology after including androgynous male model Andrej Pejic in its annual 100 Sexiest Women in the World — only to brand him a ‘thing’ on its website. The readers of the US version of FHM this year voted to include Pejic, an Australian, at number 98 in its annual list of the 100 sexiest women for 2011.” — The Guardian

Good morning, early birds. Scott Morrison is ignoring international pressure to take "bold action" on the climate emergency, and Victoria's opposition has reportedly received approval for a parliamentary inquiry into the state's contact tracing system. It's the news you need to know, with Chris Woods.

Australians deserve an economic debate of substance, not dogma

Groundbreaking economist Alan Krueger, adviser to two US presidents, died last month — but his work lives on in local debates about minimum wage and inequality.