Subs fight goes to iPad launch. Last night’s media launch of The Age‘s iPad application drew a crowd of feisty employee leafletters to Fairfax’s Melbourne Media House HQ to continue their crusade against CEO Greg Hywood’s sacking of 300 staff. As ad men and corporate types shuffled in to be wowed by the amazing new technology, they were handed flyers noting the iPad “needs subs, designers and artists too”, with a quote from Peter Carey’s angry email to Age editors on the back. 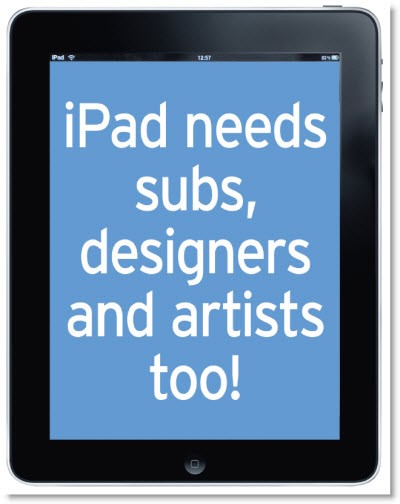 The response was generally fairly polite, as attendees were urged to send protest emails to metro chief Jack Matthews and Hywood. Matthews, on his way past, apparently took one of the activists aside for a quiet word and one Fairfax board member admitted the board “would be discussing” the issue at its next meeting. Sydney Morning Herald publisher Peter Fray — in town for the union’s EBA negotiations — didn’t stay for the party, with his paper hosting its own shindig on Monday night.

AFR is free on Facebook. The Australian Financial Review — widely ridiculed for its website that has about 6000 (mostly corporate) subscribers — has launched its own Facebook page. It features links to the rare afr.com yarns which haven’t disappeared behind its notorious paywall, and a smattering of images from that day’s edition.

Both are helpful because the Fin‘s free online stories are rarely trumpeted. Still, the AFR could be facing an uphill battle to convince its rich white male readership to embrace the Face. By lunchtime just 93 people had “liked” the page, including Crikey. — Andrew Crook

Worst slowdown since medieval times? The Age reaches back to medieval history to compare the Gillard government (thanks to @AOCarr) …

Sixth caller wins! (Though Derryn might die.) Was this a little insensitive by the ABC’s Brisbane station? (To be fair, Hinch was on air discussing his ailment…)

The Department of Corrections. The relationship between an editor and their cartoonist is a strange one. The following correction comes from yesterday’s National Post in Canada:

“A prominent Pakistani journalist who investigated links between the military and al-Qaida has been found dead, triggering angry accusations against the powerful Inter-Services Intelligence spy agency.” — The Guardian

“Janna Herron, who was with the AP for over five years, tells AP Business colleagues: ‘I’m the 56th person to leave since the newsroom’s management style turned negative and mean-spirited three years ago. And I’m sure I’m not the last. I just couldn’t do it anymore. So, best wishes to everyone. You’re all better editors, reporters and writers than what you’ve been told, and you deserve better leadership.'” — Poynter

What if the media stopped sensationalising Palin?

“In other words, instead of glamorizing Sarah like The Times did with this (biker edition) Cover Girl photo and the movie lot Easy Rider title, what if the media published photos of Team Palin — in this case, at Sunday’s Rolling Thunder veteran POW/MIA motorcycle ride starting at the Pentagon — as the flimflam they really are?” — The Huffington Post

Reports that consumer spending is back to where it was last year leave out the fact that contactless payments are the new norm.

Pretty sure there’s only one organ you would find in Derek’s “transpants”.

“The subs are revolting at iPad? What about their wraps?”

Re; The Human Headline…
Methinks brain…