A big GDP fall but no need to worry

What makes this downturn not a matter for real concern is that, with nature having been kinder since February, export growth is back on track so we are not on the verge of a recession as a casual glance at the figures might indicate.

A big fall but no need to worry. The headline can look a bit frightening when the national gross domestic product falls by the greatest amount since the recession we had to have back in 1991.

The 1.2% drop the Australian Bureau of Statistics estimates for the March quarter out this morning left through the year growth at just 1%. The quarterly fall was greater than the country suffered during the global financial crisis and illustrates the importance of coal and iron ore exports to national prosperity. 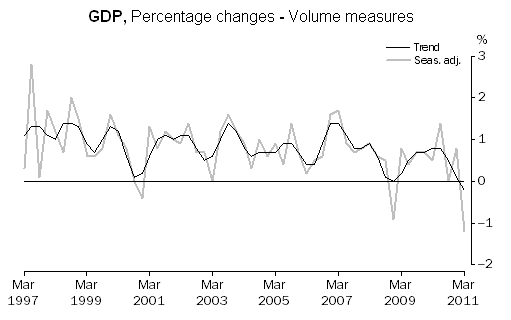 That March result was about what the economic pundits predicted after their hurried revisions yesterday when the Statistician reported that the fall in mining exports as a result of cyclones and floods would deduct 2.4 points from the GDP figure. What makes this downturn not a matter for real concern is that, with nature having been kinder since February, export growth is back on track so we are not on the verge of a recession as a casual glance at the figures might indicate.

And there are some other encouraging signs. People are continuing to save more with the trend of the household saving ratio pointing upwards. Yet there are no signs in the national accounts figures that Australia is having a wages outbreak. Unless Chinese growth slows considerably. The main thing that could interfere with the return to solid growth for the Australian economy is if there is a considerable curbing of demand from China.

Stories like this one from the New York Times at least raise that possibility: India seems to be having a similar problem with inflation. Its economy grew at its slowest pace in five quarters during the March quarter. Rising interest rates curbed both consumption and investment and the central bank is expected to continue tightening rates in its battle against inflation.

NT News seeks foreign boost. Having lost its title as the Australian crocodile picture champion, the Northern Territory News has stooped so low as the use imported pictures. This morning it features an elephant on its front page in a desperate attempt to outdo the Cairns Post. Only inside did the paper come clean and disclose: At Crikey we are refusing to accept this as an official entry in our Australian crocodile picture of the year contest.

Senate hearing gets catty. From the ABC 11am news comes this meow of an incident.

In a more hostile landscape, Morrison rediscovers multilateralism and reverts to Howard-speak on China

Beijing's new dossier of 14 disputes with Australia doesn't tell us anything we didn't already know — but that doesn't mean they're wrong...

Good morning, early birds. South Australia has this morning entered one of the world's strictest lockdowns, and the Chinese embassy in Canberra has deliberately leaked a dossier of 14 disputes against the Australian government. It's the news you need to know, with Chris Woods.

There’s no “elephant’s trunks” of their own, in the Territory, with their drinking record?
(Wonder is this one’s not pink.)