Australian house prices are continuing to edge down according to the latest figures from the RP Data-Rismark Home Value Index.

Property prices keep edging down. Australian house prices are continuing to edge down according to the latest figures from the RP Data-Rismark Home Value Index. In a report this morning the company says that based on more than 85,000 home sales nationally in 2011, the Index for the combined capital city dwelling markets declined by -0.3 per cent (seasonally-adjusted) in the month of April (or -0.1 per cent in raw terms). 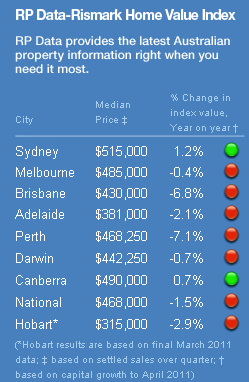 Over the three months since the January floods, dwelling values in Australia’s capital cities have tapered by -1.2 per cent on a seasonally-adjusted basis. In raw terms, dwelling values have declined by a much more modest -0.2 per cent. The difference between these two results reflects the fact that the housing market typically experiences higher rates of capital growth at the start of each year, which is reflected in the seasonally-adjusted data.

According to Tim Lawless, RP Data’s research director, expensive suburbs have helped drag the overall market down. RP Data and Rismark divide their capital city index into three sub-indices: the bottom 20 per cent of suburbs ranked by price, the middle 60 per cent, and the top 20 per cent.

RP Data’s Tim Lawless commented, “The solid performance of cheap suburbs runs against the grain of popular claims that default rates are rocketing up amongst first time buyers, which the RBA recently rejected.”

“The luxury end of the housing market is also showing its volatility. During the growth phase of the cycle the most expensive homes realised the highest capital gains. Yet as the market cools premium home values seem to be losing steam the fastest,” he said.

Rismark Joint Managing Director, Christopher Joye, added, “The uber-luxury segment is risky and highly illiquid and has had the rug whipped from under it via a combination of the soaring Aussie dollar and the volatile share market. A final fly in the ointment is the much lower growth — and pay packets — expected in the financial services industry going forward. Luxury homes in areas like Sydney’s Eastern Suburbs will continue to face valuation headwinds as banks deal with the new normal of subdued credit growth.”

But will the people cop it? The politicians and the economists were at least pretending in Greece over night to be more optimistic that a plan might be cobbled together to prevent that country defaulting on its debts.

“The Greek government and the representatives of the European Commission, European Central Bank and the International Monetary Fund, collectively known as the troika, are nearing agreement on the details of the midterm fiscal plan and privatization program but several key stumbling blocks remain,” the Athens daily Kathimerini quoted “sources” as reporting.

Those anonymous “sources”  said that the government has agreed on a number of measures that will be included in its midterm fiscal plan.

Among these are further cuts to the benefits received by civil servants and an extension of the time frame in which they can receive a pay rise from two to five years.

The government also appears to have agreed to adjust its hiring policy for the public sector. After prompting from the troika, PASOK had decided to hire one civil servant for every five that leave but this will now be changed to one for every 10 that depart. The public investment program will also be limited to 1 billion euros per year.

Among the other potential measures being discussed is the closure of public enterprises, which will inevitably lead to job losses. Another option is the closure of all or some of the state TV channels, which would be replaced by a smaller public broadcaster.

A sticking point, however, could be the formation of the independent agency that will oversee the privatization scheme, which is supposed to raise 50 billion euros by 2015. The troika has insisted that its representatives have a say in the body’s decisions and that they are able to block any moves they disagree with. They have also demanded that no representatives of the government be allowed to participate in the agency and that any decisions it takes should be protected by law so that they cannot later be reversed by a different government.

A sticking point? The so-called independent agency looks rather like the Greek Government having to agree that it is no longer in charge of governing the country. While that might sound very good and sound to those having to put up the money to keep Greece afloat and in the Euro currency fold, the voters might not be so happy.

Yesterday they were out on the streets of central Athens, Thessaloniki and other cities demonstrating in force for the sixth consecutive day against the already announced austerity measures even before being told they are now about to have a five year pay freeze!

The website slogan of the so-called Indignant M0vement, which has taken its name from the original Spanish campaign “Los Indignados” which also sees thousands of anti-austerity in the streets, “Greece belongs to the Greeks not the bankers” has a somewhat ominous ring to it when it appears under the headline “Poverty Brings Violence” The changing politics of doctors. An intriguing article in the New York Times about the changing nature of doctors: Is it happening here too? The Australian Medical Association certainly seems to me to be a much more moderate and thoughtful organisation these days.

SHI –oh. I thought someone had cenored out the ‘t’ on the photo caption.

And you said such nice things about her, too.

There are 10,000 units for sale on Gold Coast now, frightening

Ya, I remember the AMA telling its members to tell their patients that Whitlam’s introduction of Medibank would lead to Maoist socialism and death camps (I am not being ironic).