Having a bet on the baseball might be illegal in every American state bar Nevada, but every morning on the sports pages are the odds. It's a reminder to those who would like to outlaw betting on Australian sports.

Every Australian over 17 loses an average of $1300 a year on gambling – that’s about $22 billion for the whole country each year. As the fight over independent Andrew Wilkie’s pokies legislation hots up, over the next fortnight Crikey’s new series Last Bets will examine just how hooked our country is on having a flutter.

We’re not talking about the average problem gambler’s addiction here, instead, we’ll dig into our state governments’ reliance on revenue, the future of gambling online, its grip on sport, the burgeoning casino tourism industry and the role of pokies venues in local communities for starters.

They are playing rugby league tonight at Centrebet Stadium. Saturday had the St Kilda Saints out on Perth’s Paterson Oval displaying their Centrebet logo… 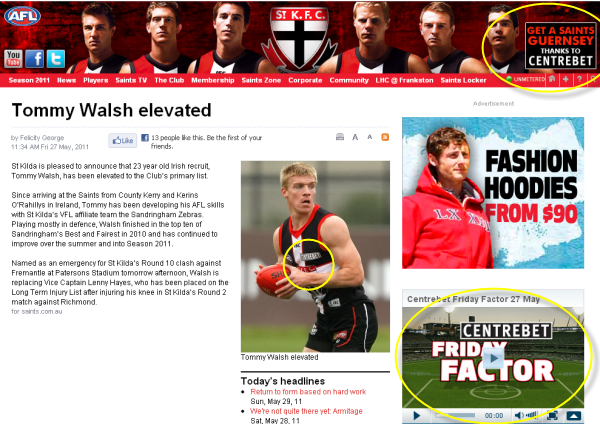 Around the grounds in both major codes the bookmakers’ display advertisements were positioned at all the best camera angles. The only thing missing in this weekend betting advertising bonanza were the lime green Canberra Raiders reminding the fans that the city’s biggest poker machine palace, the Tradies club, was the place to meet the players after the game.

The Raiders had the bye.

If you are a parent worried about your little darling being influenced into thinking that having a bet on the footy is the most natural thing in the world, all this subliminal exposure must be making things difficult for you. And perhaps that is a far more worrying thing than the barrage of advertisements by bookmakers and the constant advertorials by commentators that now seem to dominate every football telecast.

Yet it is the plugging of betting odds during the game — something directed at those old enough to have a phone account with a bookmaker and thus presumably old enough to look after themselves — that governments state and federal decided to act against when they met in Canberra on Friday.

According to Communications Minister Stephen Conroy there will be no new contracts allowed for in-game betting – either on scoreboards or on television. Bookmakers and broadcasters will be given until the end of June next year to address the issue, or the government will draft firm legislation to ban live odds promotion for all sports with the exception of horse racing.

“All the ministers have agreed that we should put forward proposals, ultimately possibly legislation, to reduce and control the promotion of in-game betting,” Senator Conroy said in Canberra. “You won’t need to have Richie Benaud telling you and urging you, here’s the odds on who’s going to get out next, or who’s going to bowl the next no-ball … that kind of advertising that’s being pushed into people’s faces.”

Clearly taking advertising dollars away from television stations is more politically palatable than putting a stop to promotions like logos on jumpers and ground signage where the money ends up in the coffers of the football administrators.

Not that even a complete ban on advertising sports betting would have much impact on stopping the growth of such flutters if the American experience is anything to go by. Having a bet on the baseball might be illegal in every USA state bar Nevada, but every morning on the sports pages are the odds. Take this example from USA Today: Fancy Baltimore to beat Kansas City? Put on $140 to win $100. Take your pick whether there will be more or less than eight and a half runs scored in the game and your friendly local SP bookie will pay you at the standard rate of -110 (put on $110 to win $100 is the way those Americans put the odds).

Similar in its own way to what Australia used to be like all those years ago before TAB’s made off-course betting on horse racing legal. And a reminder to those who would like to outlaw betting on Australian sports of what would happen here if they succeeded. Approve of the practice or not, having a bet is one of those things that people just like to do as the American newspapers well realise.

So much so that in the US, Nevada’s legal sports wagering represents less than 1% of all sports betting nationwide. In 2010, $2.76 billion was legally wagered in Nevada’s sports books; the National Gambling Impact Study Commission (NGISC) estimated illegal wagers are as much as $380 billion annually.

While Americans seem happy to leave most of the business in the hands of the illegal operations dominated by organised crime, Australia has gone down the regulatory route as the increased coverage of sport on television has fostered the interest in sports betting.

Inevitably there have been a few minor scandals as the smarties try and steal an advantage over the legal bookmakers and, through them, other less informed punters. But most of the current crop of incidents causing concern among politicians, I notice, were actually failed attempts.

By all means have such incidents investigated as the stewards do at the race track, but don’t expect improper practices to stop. And don’t be sympathetic for the bookmakers. No one is forcing them to take a bet and history shows that most of them are quite capable of protecting themselves from the unscrupulous rorters.

Could the Vic Liberals still swing it?

The betting markets seem convinced that Denis Napthine will wake up on Sunday as opposition leader, but do the numbers really stack up?

Tax Office has David Walsh by the short and curlies

The ATO is chasing professional punter and millionaire arts enthusiast David Walsh hard for $37.7 million in unpaid tax. Crikey has been told the case against him is strong, reports Chris Seage.

Psepho Nate Silver compiles betting odds and pundits' predictions to project the winners (and losers) for the Winter Olympics. According to his figures, Australia should pick up a couple.

There’s nothing “subliminal” about Centrebet’s adds.

Another angle..given the recent examination on profit margins of retailers (eg Harvey Norman 30~40% compared unfavourably with others.)

given betting is a licence to print money..two flies up a wall australians will compulsively bet anything on anything.

so what is the margin?
and who owns the betting companies??

i suspect foreign ownership has already sent most profit offshore …

a local betting company could argue, and win, that one!

partly explains the vociferous opposition to any regulation in Australia, given Europe is the most regulated betting market on the planet.
Another first, alone with the absence of any effective privacy regulations, we really are still a colony in many ways…