Australia can afford to have vision

As a nation we've never been better placed to tackle long term issues like health, our ageing population, transport, sustainability, communications, superannuation, climate change and the growing gap between rich and poor.

As part of their compelling series on Australia, The Economist has examined just how stinking rich we are right now: 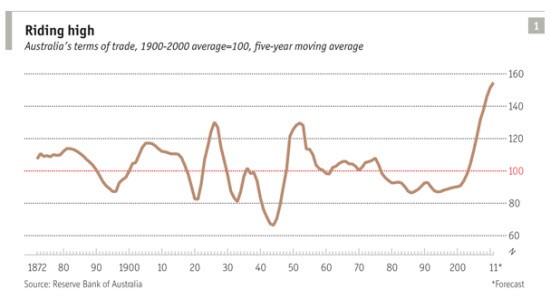 “These statistics reflect an astonishing transformation of Australia’s fortunes,” marvels the mag. “…the terms of trade have reached new heights. As the central bank’s Mr Stevens has put it, five years ago a shipload of iron ore would have bought about 2,200 flat-screen television sets; today it buys about 22,000. That is partly because import prices have fallen, but more because export prices have risen. Neither trend can continue indefinitely, but the average terms of trade over the next two decades are likely to be higher than over the past three.”

We’ve said it before — as a nation we’ve never been better placed to tackle long term issues like health, our ageing population, transport, sustainability, communications, superannuation, climate change and the growing gap between rich and poor.

And yet we’re reluctant to cash in on this position.

Over the weekend inventor Saul Griffiths spoke at the TEDx Sydney conference. Griffiths is the founder/principal scientist at Other Lab, where he focuses on engineering solutions for energy production and energy efficiency.

Griffiths marvelled at Australia’s collective lack of imagination — not just from government: “To paraphrase the environment movement, if we try really, really hard, and make a lot of sacrifices, the future will suck a little bit less than otherwise.” Griffiths is also a Tin Tin fan:

“I want to live in a future walking on zero gravity on the moon, with a fish bowl on my head and my dog is walking beside me. There is a collective failure of our imagination if we let ourselves believe that the future is going to suck. We have to inspire our children to do some awesome stuff.”

As Climate Spectator reports today, Griffith is based in the US — mainly because of the lack of resources given to the technology sector in Australia. He implored Australia to think about how we will use our money and resources.

“We should be using investment this in an intelligent way. We are a very rich country, but we are not investing. We are investing in casinos and horse racing…”

So what are we consumed with talking about today? Not our collective wealth and what to do with it, but someone else’s fat wallet and whether it negates their right to have a political opinion.

Aren’t we bigger than this? We can certainly afford to be.

Using the resources boom for social programmes, where the hell do you think you are, Venezuela?
The resources boom is there to enrich the already rich, very very little will trickle down to the peasants. The few jobs it will generate are dangerous to the workforce and destructive of the concept of community. The resources boom will do NOTHING to make the world a better or fairer place, and is not worth a pinch of……..

Venezuelans are better off than we are, Andrew?

Venezuelans have a greater political and social awareness than we do, due to the changes that have occurred within their communities in the last 13 years. While still a very capitalist country, the Socialist Revolution that has given hope and sustenance to the poor, has engaged the population in a way that we could not possibly envisage in our fantasy world here.

And yet, Australia’s ranked number two, with Venezuela coming in at seventy-five.

The Human Development Index (HDI) is a comparative measure of life expectancy, literacy, education and standards of living for countries worldwide.

If you ranked us by MSM, we’d be a lot worse, I suspect.

(Had no idea we were that highly ranked)

All those numbers and graphs sound/look good, but it doesn’t seem to be filtering down to the bottom 20-30% of the population. We may be “filthy rich”, but the only ones who are benefiting are the top 10% (maybe?) I keep pointing out on various Crikey posts that the income split between workers and bosses is way out of line compared with what it has been in the past. This is the reason everyone wants handouts from the government, when in fact, it is not the government at fault but the employers overall. But to be fair, the whole system in this country is cactus when you have to be a squillionaire to take advantage of the good life on offer here.