Slutwalk: feminists take to the streets to reclaim ‘slut’ in style

Thousands of feminist-minded individuals took to the streets on Saturday to protest against slut-shaming and victim-blaming in colourful SlutWalks in Melbourne and Brisbane.

Thousands of feminist-minded individuals took to the streets on Saturday to protest against slut-shaming and victim-blaming in colourful SlutWalks.

Melbourne joined Brisbane as the first of the Aussie SlutWalks after a careless line from a Canadian policeman — telling university students not to “dress like sluts” if they wanted to avoid sexual assault — turned into a global phenomenon. 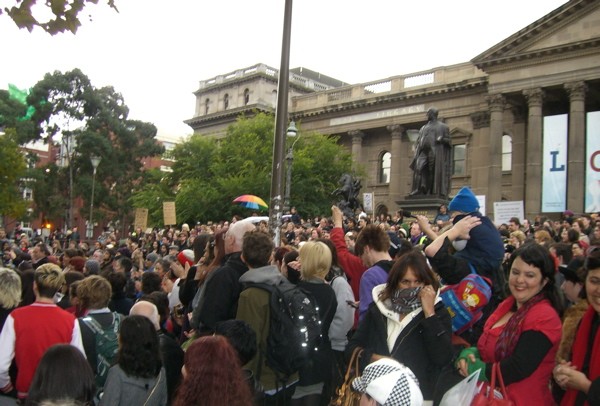 From 1pm supporters gathered on the grass and steps of the State Library of Victoria to hear speeches, before marching down Swanston St and finishing at the Fitzroy Gardens, where The Age had set up a lavender coloured fabric backdrop to shoot pictures of the best-dressed protesters for an online gallery. 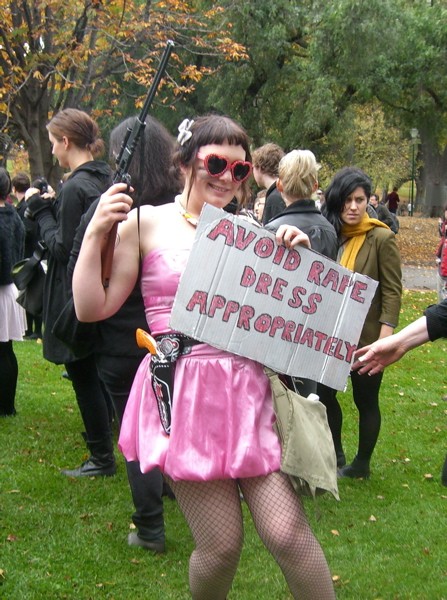 Not that it was the short-skirt and low-cut top perve-fest that many claimed it would be. Most of the crowd was made up of young females in their 20s and 30s. Most cultural tribes appeared represented: Victoriana dresses, rockabilly 50s frocks paired with red lippy, goths in their black leather, a group of friends dressed in Lady Gaga-esque neon lycra — complete with g-string leotards over coloured tights, bright eye makeup and signs saying “If Madonna can wear it, I can too”, middle aged mums in cardigans, guys in drag and lots of lots of everyday white middle class types wearing jeans and jackets. There was even an appearance by pedobear, resplendent in a floral bikini over the big bear suit. 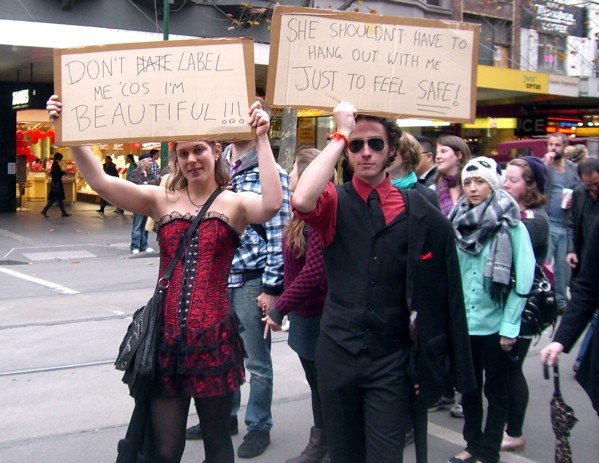 The rain, which looked like it was about to fall just as the crowds were gathering, held off, although a friend of mine had offered up the hilarious “wet sluts” headline in case the storm hit.

Even sluts aren’t immune to the Melbourne cold, with one guy overheard reminding his more scantily-dressed lady friend “remember, you told me I can’t give you my coat until the end of the march”. 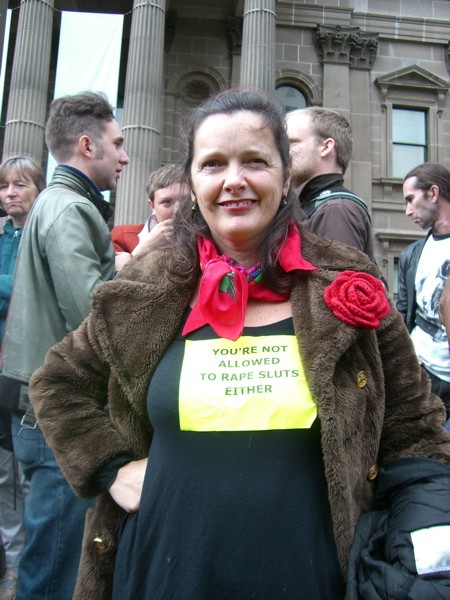 Former Age columnist Catherine Deveny, stalwart of all major Melbourne lefty rallies, handed out large yellow “You can’t rape sluts either” stickers from her spot at the back of the State Library grass.

“I just think it’s important to get the message out there that it’s never OK to rape and slut is a very strong word that has had connotations attached to it for rapist apologists and people who support the idea that women are objects not equals,” Deveny told Crikey.

Not that it’s just about the ladies, clarified Deveny. “More than anything I support men and I don’t agree with the idea that men can not, do not, or have no desire to want to control their own impulses and that we are the gatekeepers of sexuality and we’ve got to dress in an appropriate, respectable way in a way that is not provocative because they can’t possibly control themselves. They can and they do and they want to.”

Deveny wrote an article for The Drum yesterday explaining why she was taking her three young sons to SlutWalk. When asked if they had wanted to come, Deveny explained: “The 13-year-old at the end went ‘I don’t wanna gooooo’ and I said ‘well women don’t want to get raped either, get in the car.’” 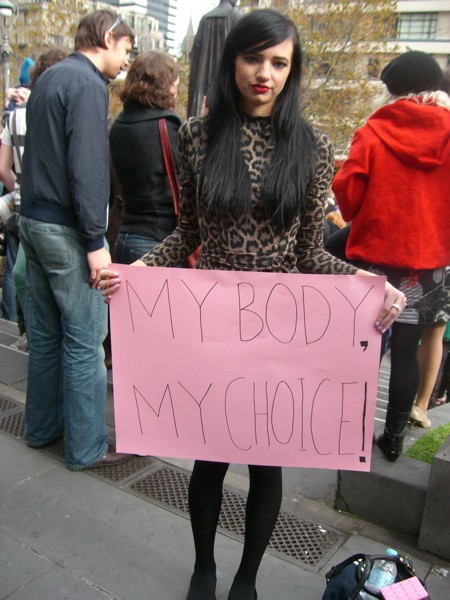 For Ilona Szirer, a 21-year-old student resplendent in a leopard print leotard and red lippie, SlutWalk was the first time she’d joined a political protest. “I’m here because I’m sick of being judged for how I look or what I wear and the assumptions that people make about that,” she told Crikey.

“Our presence will make people question what is a slut and what’s wrong with enjoying sex as a woman. This is a really great place to publicly say what I feel and wear what I want and feel comfortable.” 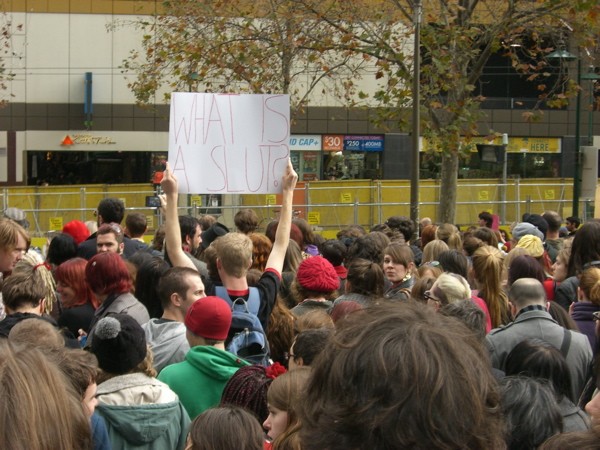 A variety of speakers addressed the crowd, from sex workers to survivors of sexual assault and feminist writers, although sadly the PA wasn’t strong enough for those up the back to hear any of the speeches – and the crowd was too tightly packed in too push through.

Instead, there were several calls of “turn up the PA!” and “we can’t hear you”. One feminist gent in the crowd declared “I know these ladies don’t want to be silenced, but I can’t hear them very well”. 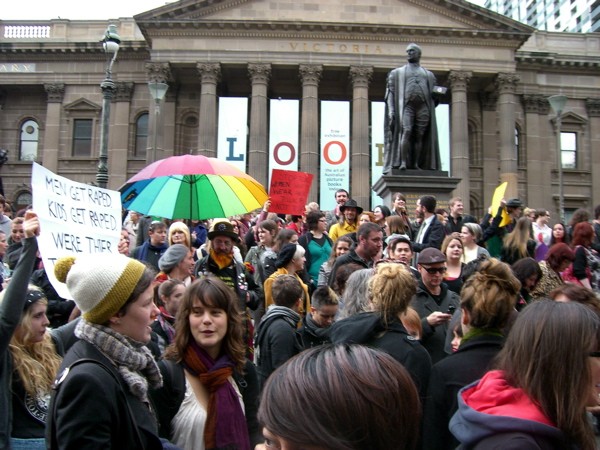 Cody Hepburn Lagerfield Smith, who addressed the crowd about his own experiences with sexual assault in the day’s most inspiring speech, chatted with Crikey afterwards: “I mainly came here and spoke because there’s not enough masculine voices speaking out against victim-blaming and out against rape. And I think a lot of dudes need to check themselves and educate themselves and educate their friends on their privilege.”

The crowd had plenty of male support, from dads in their 30s pushing prams to young members of the gay and transgender communities parading costumes worthy of Mardi Gras. 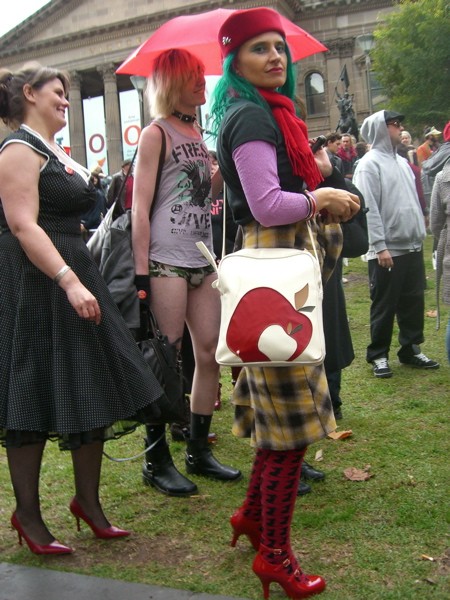 While much of the crowd was in a happy festive mood, greeting friends, having chats and chanting and singing, the political objectives of SlutWalk were never too far away.

Audry Autonomy, a sex-worker and one of the co-organisers of Sydney’s upcoming SlutWalk on June 13 spoke to Crikey about the need for sex workers and transgender groups to become involved with the SlutWalk movement and its call to end victim-blaming. 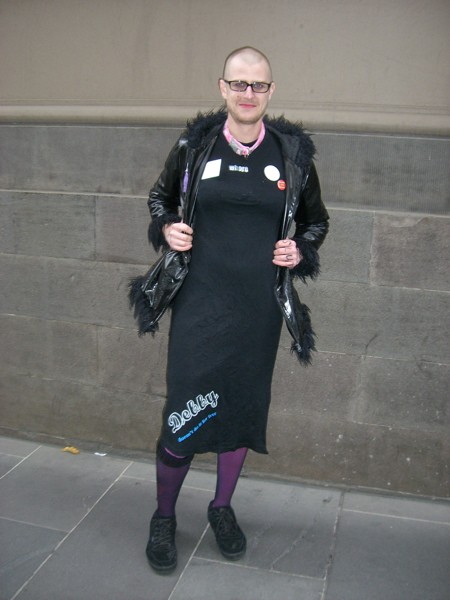 “I’m a sex-worker, I’m a slut and a whore and I’m reclaiming that too,” said Autonomy. Autonomy spoke of the constant struggle that sex workers have in dealing with the police and authorities in regards to sexual assault and rape, since, as Autonomy explains, “we’re told that we should expect it as part of our jobs”.

“A lot of sex workers are terrified to seek assistance from the police or access to justice, because they assume, with good reason, that they’ll experience victim blaming at the hands of the police.”

According to police reports quoted on the SlutWalk Melbourne Facebook page, about 2200 people attended the rally, a significant drop from the 5000 number that media reports have been banding about this week. 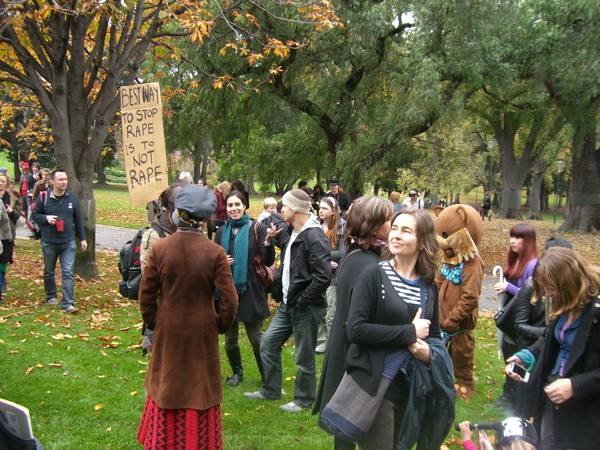 Not that sluts and slut supporters seemed to care.

Karen Pickering, one of the organisers of SlutWalk Melbourne, was buzzing with excitement after the walk, telling Crikey “I’m high as a kite at the moment and it’s not chemically induced.”

But she was aware of fitting SlutWalk into the grander social picture. “It’s a long road and we’ve taken a few steps today,” said Pickering. “We’re walking in the footsteps of incredible people in the past who have pushed feminism forward for thousands of years and it’s just another moment in feminism.”

Rad! Congrats to all the sluts and allies!

Most cultural tribes may have been represented, but were most socio-economic groups, and ages? It seems to have been an event that appealed only to white, middle-class, young people and media pundits. Yet rape, and all sexual violence, does not discriminate. Why was no effort made for a variety of voices to be heard? Or, why did only privileged people want to align themselves with SlutWalk?

As for the slogans, the whole event is a postmodern farce. “You’re not allowed to rape sluts either!” “My body, my choice!” “What is a slut?” Newsflash, sloganeers – no one is ‘allowed’ to rape sluts, not only sluts get raped, a rapist doesn’t give you a choice, and a slut is STILL a derogatory term for a loose woman. As for the sign that says, “The best way to stop rape is not to rape” – I’m speechless at the stupidity of it.

Sure, SlutWalk got some media coverage thanks to their sensational name, which meant a reminder that rape is wrong and victims are never to blame. But what did they really achieve for victims of rape? Nothing. Instead they alienated, silenced, and angered a lot of women who do not want to be called sluts because it’s a word beloved by abusers and that isn’t going to change. The only way SlutWalk will fit into the grander social picture is by going away.

All power to them.