Qantas spluttering to Dallas. Further to Qantas flying to Dallas: I’m 90% sure that when Qantas purchased the 747ER an extra hold tank of 10,000 kilograms of fuel was available but because it reduced the amount of cargo that could be carried, it rejected it. Don’t know if it is available now. Secondly, this service is […]

Qantas spluttering to Dallas. Further to Qantas flying to Dallas: I’m 90% sure that when Qantas purchased the 747ER an extra hold tank of 10,000 kilograms of fuel was available but because it reduced the amount of cargo that could be carried, it rejected it. Don’t know if it is available now.

Secondly, this service is so tight that Qantas monitors the winds and flight time in the 24 hours leading up to departure. If it feels that there will be a problem with the fuel uplift they contact passengers by phone and send them to LAX (Los Angeles) instead for the flight to Australia.

Shooters forced out at Maroubra. Has the NSW government finally worked out a way to grab the shooting range land at Maroubra? They’ve wanted it for years. They chucked out the shooters the other day, citing workplace health and safety while alleging there’s asbestos in the site. All very sudden and underhanded.

Programs have to die if you misspell. Melbourne theatre circles are abuzz ahead of the premiere of Andrew Lloyd Webber’s Phantom sequel Love Never Dies on Saturday. But is it true tens of thousands of copies of the glossy program had to be pulped when Sir Webber himself discovered his name was spelled wrong?

Where’s my free magazine, Age? There was a note at the Melbourne University newsagent this morning informing students The (Melbourne) Magazine had not been delivered with The Age, and advising them of a contact phone number for The Age‘s tertiary subscriptions department. On calling this number, a customer service staff member explained that one of the terms and conditions of the tertiary subscription is that supplies of the The (Melbourne) Magazine are subject to availability.

How is it that the magazines were “unavailable”? The staff member insisted that copies of the magazine would have been sent if enough were printed, and that since the campus store was probably not a registered newsagent, it must have been the fault of the newsagent who delivered the papers to the campus. Next, the call was transferred to the circulation department, where another staff member suggested going to a different newsagency and asking for a spare copy, promising that if there were any difficulties, arrangements could be made for a copy to be posted out, but that this could take up to a week.

How hard is it to deliver copies of the magazine with the newspaper to a campus with a large number of subscribers? 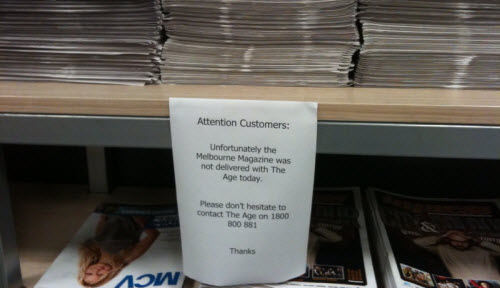 Thanks for subscribing — or not. Is this a new kind of phishing or just some push direct marketing? I received a letter from the Herald Sun circulation marketing manager  informing me the credit card details I provided for the special offer of a Herald Sun and Sunday Herald Sun were incorrect. Would I please call during business hours and quote a number more intricate than a software key ID, they said. The things is, they had my name and address and no one in my house has ever subscribed, or tried to subscribe, to the Herald Sun. But we do get The Weekend Australian — are Rupe’s mob sharing data?