There's no doubt that Malcolm Turnbull should have been there in the House of Representatives when votes were taken.

Malcolm’s a naughty boy. There’s no doubt that Malcolm Turnbull should have been there in the House of Representatives when votes were taken.

In a Parliament where Labor does not have the numbers in its own right, every vote is important.

Not to turn up is a dereliction of duty and rather than complaining about being chastised in an email from the party whip, the Member for Wentworth should have apologised to his colleagues and promised not to do it again.

Irrelevant and effective. Australia certainly does not have a government debt crisis. By comparison with other developed nations things are quite manageable thank you. But that does not alter the political effectiveness of the constant hammering away by the Coalition Opposition at Labor being a poor money manager by always running a budget deficit.

The latest Liberal Party offering on the subject went out this morning: 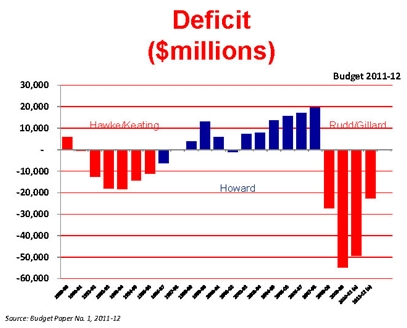 It is short and to the point and the determination of Julia Gillard and Wayne Swan to produce a surplus before the next election is testimony to the fact that the Opposition campaign is having an impact on voters.

“When the going gets tough – you have to lie.” That’s the quote attributed to the politician heading the European Union efforts to solve the Euro financial crisis.

Earlier this month, Jean-Claude Juncker, Luxembourg’s Prime Minister, gave that explanation of some misleading comments he made concerning the Greek financial restructuring and bailout possibilities.

Just something to keep in mind as the saga of the new financial crisis unfolds: don’t believe a word a politician tells you.

The Texas dust bowl. The Mississippi River is in flood. The midwest of the USA is being struck by tornadoes. And in Texas, and adjoining parts of Oklahoma and New Mexico, conditions are drier than they’ve ever been — the drought is worse than that of the Dust Bowl. The last 12 months have surely produced some weird and wonderful weather round the world.

And no more so than in the Arctic where it looks like we are on the way to even less ice cover at the end of this northern summer than the record low year of 2007. But, just remember, as Bill McKibben writes in the WashPost today:

Caution: It is vitally important not to make connections….

It is far better to think of these as isolated, unpredictable, discrete events. It is not advisable to try to connect them in your mind … It’s far smarter to repeat to yourself the comforting mantra that no single weather event can ever be directly tied to climate change. There have been tornadoes before, and floods — that’s the important thing. Just be careful to make sure you don’t let yourself wonder why all these record-breaking events are happening in such proximity — that is, why there have been unprecedented megafloods in Australia, New Zealand and Pakistan in the past year. Why it’s just now that the Arctic has melted for the first time in thousands of years….

Better to join with the U.S. House of Representatives, which voted 240 to 184 this spring to defeat a resolution saying simply that “climate change is occurring, is caused largely by human activities, and poses significant risks for public health and welfare.” Propose your own physics; ignore physics altogether. Just don’t start asking yourself whether there might be some relation among last year’s failed grain harvest from the Russian heat wave, and Queensland’s failed grain harvest from its record flood, and France’s and Germany’s current drought-related crop failures, and the death of the winter wheat crop in Texas, and the inability of Midwestern farmers to get corn planted in their sodden fields. Surely the record food prices are just freak outliers, not signs of anything systemic.

It’s very important to stay calm. If you got upset about any of this, you might forget how important it is not to disrupt the record profits of our fossil fuel companies. If worst ever did come to worst, it’s reassuring to remember what the U.S. Chamber of Commerce told the Environmental Protection Agency in a recent filing: that there’s no need to worry because “populations can acclimatize to warmer climates via a range of behavioral, physiological, and technological adaptations.”

And now for some more hopeful news. In an interview with Bloomberg, Mark M. Little, the global research director for General Electric Co. tells of how his company had boosted the efficiency of thin-film solar panels to the point where he was hopeful “we can get solar at 15 cents a kilowatt-hour or lower. If a pandemic hits, you must deficit

Regarding the latest liberal offering on the deficit. Perhaps the question should be “when was the last time the Coalition had to govern in tough economic times?”. My recollection would be 1983 when John Howard was Treasurer and they didn’t do much of a job.

It’s a glimmer of hope from GE, and I’m all for renewable power generation where appropriate, but the compelling science says we need to shut down our profligate emissions from coal now…not start whittling it down with a few more solar PV rooftops in five years, maybe.

What concerns me about these types of announcements is that it feeds the notion that we don’t need to start building nuclear reactors to replace coal in the near term, and by all the calculations I’ve seen about scaling renewables the inescapable conclusion is that we do.

Re the Defecit: Look – it’s very simple not to run a deficit – don’t spend anything – and don’t, for God’s sake, invest – the Coalition is very good at not spending (except, perhaps, and only now and then, in support of the odd group of powerful, influential chums). So Tony is right to berate Julia and Wayne for being in debt – except – oh wait – doesn’t he have a newly-declared $710,000 mortgage (http://bit.ly/dkRNV4? – Pot? Kettle?

Running a deficit is not, in itself, a problem. Money is a resource to be used and paid for just like any other resource or tool. Those heros of the Right, the Big Miners regularly get themselves into hock for $Billions. As long as the Government is using the money to invest wisely in the future of Australia (and I believe, for the most part, they are) then this is just an opposition beat-up (but unfortunately all-too effective when addressed to some sections of our community)