They heart the Herald: journos hit the pavement after sub cuts

Sydney Morning Herald hacks have turned out in force at their city's main business mall to remind loyal readers their broadsheet is under dire threat from Greg Hywood's decision to sack the paper's subeditors.

Sydney Morning Herald hacks have turned out in force at the city’s main business mall to remind loyal readers their broadsheet is under dire threat from Greg Hywood’s decision to sack the paper’s subeditors.

Close to 1500 signatures were gathered in rapid-fire fashion, with journos displaying the intrepid feet-on-the-street mentality that stood them in good stead as cadets. Commuters emerging from the nearby underground station were met with smiles and “I heart the Herald” t-shirts, with buttoned-up businessmen vox-popping for the cameras. 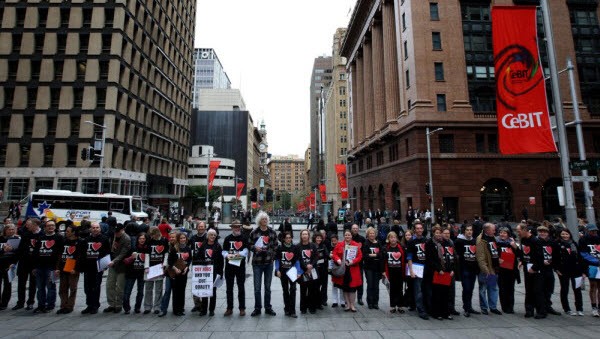 At one juncture, Hywood was seen scurrying through the scrum en route to Fairfax’s offices at Pyrmont from Potts Point. However, a muttered “hello” from Washington wasn’t enough to convince his boss to stay and chat. Dumped Financial Review chief Michael Gill was also apparently sighted shuffling along the thoroughfare but also failed to linger.

Anderson, who by all accounts did a stellar job rallying the troops and waving placards, told Crikey the “flash mob” action was based on firm principles and savaged his employer for its intransigence.

“The company strategy is a little bit like Moe from The Simpsons who burns down the Springfield observatory so a comet disaster can never happen again,” he said. “Any company with a mindset that accepts the fact that you can do better with less is not living in the real world.

“Producing better quality from less resources doesn’t produce a winning formula in other industries. It flies contrary to the realities of life.”

Anderson said it was a “terrible waste” for Fairfax to discard in-house subeditors for Pagemasters employees that weren’t even in the building. External subs didn’t know the journos’ individual foibles, or appreciate their sense of humour.

“It makes life harder, not easier,” Anderson said, adding that Fairfax’s purpose-built Pyrmont edifice would be left “mostly empty” by the mass exodus. “I don’t know why they need five floors, two would be enough.” Media Entertainment and Arts Alliance communications guru Jonathan Este told Crikey the rally was an opportunity not to attack the paper, but to celebrate the current masthead and ponder what might be lost.

“We’re about supporting the newspapers rather than running down and criticising them,” he said. “We need the public to engage and understand that. It says something when journalists are shocked about the future of their own newspapers. This was about saying to the public: we have these concerns and you should too.”

Radical comrades at the partially News Limited-owned Sky News were on hand to film parts of the action, offering shouted encouragement that the struggle wouldn’t be in vain.

However, Seven’s Sunrise program seemed less interested, with Mel and Kochie declining to interrupt regular programming to go live to the ructions occurring just metres away.

Working in the media, I am at least a little sympathetic to the subs plight, but some of the adjectives in this article are kind of embarassing…
“a coordinated “flash mob” event rivalling the best international examples of the activist tactic.” and “Anderson, who by all accounts did a stellar job rallying the troops and waving placards”

For a while reading I thought the author was being sarcastic! It’s the writing style I’d imagine an authoritarian regime’s propaganda department would be proud of

I’ll SBS-ify it next time just for you.

That’s not really the point though, is it? Hyperbole doesn’t do the cause any favours

Savvy observation. You reckon I should try sarcasm?

Hmm, I’m beginning to feel I’m the one who missed the point…