Crikey says: the mysterious case of the missing royal coach

The case of the missing gilt coach, dubbed Britannia, is an issue close to our hearts...

“Five years after the Howard Government spent $245,000 of taxpayers’ money to help build a luxurious state coach for the Queen, the Senate has been told no government official knows where it is,” reports the Herald Sun today. 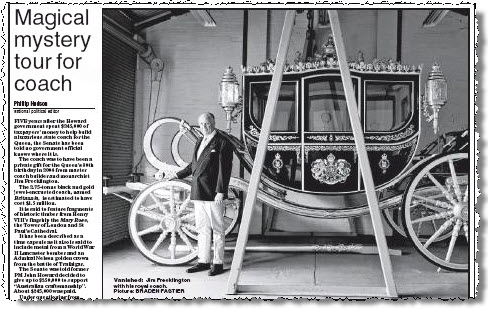 Under questioning from Labor Senator John Faulkner, public servants said they didn’t know where the coach was, had never inspected it and there was never any contract. The Senate was told around $245,000 was paid after our former PM approved the spend to support “Australian craftsmanship” and then gift the results to her Royal Highness — the perfect 80th birthday present.

The case of the missing gilt coach, dubbed Britannia, is an issue close to our hearts: Crikey has been campaigning hard on the issue since 2008, prompted initially by this red hot tip:

The Golden Carriage of North Head. NewsRadio this morning was playing some proceedings from Senate committee proceedings yesterday when questions were asked about the expensive golden carriage being produced as a gift from the Prime Minister to the Queen, intended as an anniversary gift two years ago but behind schedule. Nobody knows where it is or how it’s progressing. There is something very golden, and very carriage shaped, lying in the middle of a private business area at the North Head Sanctuary in Sydney. This is the Google Maps link to the the area and the below image indicates the area where the carriage was seen. Have any Crikey readers spotted the Golden Carriage of North Head?

Speaking from his Sydney home yesterday, he denied the coach was missing but refused to say where it was. He said it had played a role in last month’s royal wedding but did not elaborate.

“It’s ready to go, that’s all I can say,” Mr Frecklington said.

Given that two billion people tuned into the recent royal nuptials, surely some keen observer spotted the Cinderella style mode of transport? It’s black and gold and bedazzled. It weighs 2.75-tonnes. And its jewel encrusted highlights are accented with pieces of historic timber from Henry VIII’s flagship the Mary Rose, the Tower of London and St Paul’s Cathedral.

Was it bestowed the honour of cradling the flower children from A to B or — dare we speculate — touched by the now-blessed bottom of one Pippa Middleton between Westminster Abbey and the palace?

Or perhaps it never left our shores… Manly subscribers, consider yourselves on high alert…because this letter was last penned back in 2008 to The Manly Daily, by, um, the coach itself: The Queen is Her Majesty, not her Royal Highness.

If the missing coach is bedazzled, maybe it was turned into Brynne Edelsten (the bedazzled sack of potatoes from Episode 1 of Dancing With The Stars) after midnight (Cinderella, pumpkin, potato — WTF?).

I watched some of the wedding, and there was mention of one of the coaches, or maybe part of a coach, coming from Australia. When I heard this, I thought it must have this coach.
I hate to appear as if I don’t care much about our money or ERII, but even if I had recorded the broadcast, I wouldn’t watch it just to hear this reference again

I’m not certain it’s the same one, but I distinctly remember one of the horse-drawn conveyances being described as ‘Australian’ in the Catherine/William wedding commentary.

Yes I heard the same thing.

The Australian coach used in THAT wedding was the one we gave the Queen back in 1988 to celebrate the bicentennial. It’s known as the Australian State Coach.

Why don’t people use Google? I did and I found this article –
http://manly-daily.whereilive.com.au/news/story/royal-coach-carried-the-parents-prince-william-and-kate-middleton/
It says that the Britannia coach is safely locked up in Sydney awaiting royal orders.