When the Wall Street Journal starts worrying about how to keep Europe's debt crisis from spiraling out of control the rest of us should be at least a little uneasy.

The paper reports this morning on disagreements on how to handle the “debt crisis between the European Central Bank and national governments on what to do to stop Greece defaulting on its debts. Should that default happen, stand by for another major world financial crisis.

Choose your own country offering the best life. As part of its 50th birthday celebrations, the Organisation for Economic Cooperation and Development has broadened its horizons from a simple measurement of gross domestic product to take in other factors that can make for a better life.

The OECD’s new interactive tool lets you choose the importance of a range of factors.

At least it’s more fun than a table of statistics!

The impotence of Foreign Minister Rudd revealed. Since becoming Foreign Minister, the Murdoch tabloids tell us this morning, Kevin Rudd has been abroad for four days out of every 10 and travelled “a staggering 384,000km in overseas air travel.”

Yet today Crikey can reveal (with a little help from The Guardian) that this flurry of international activity has not been able to redress the greatest diplomatic snub Australia has ever suffered. The Danish ban on Vegemite sales remains intact! 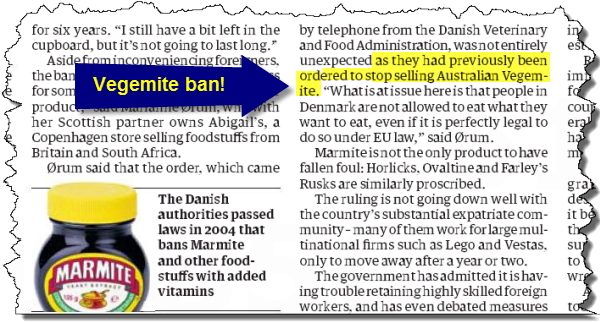 Perhaps now that the Danish food authorities have extended their ban to cover Marmite, action by British diplomats will have the spin-off effect or helping we colonial cousins who have been so grievously insulted.

Pakistan worry. The recent raid on a Pakistan naval base in Karachi by a group of militant Muslims should make us all worried. The damage done with apparent ease by the raiders does not say much for Pakistani security forces and the country’s intelligence service who were caught unawares. Yet they are the same organisations charged with keeping secure a  nuclear arsenal.

Last I saw, Vegemite was made by Kraft. We claiming Kraft as Aussie now? :^)

Are we getting value for money with the peripatetic Rudd? I think not. Just out of Gillard’s hair I guess by keeping him overseas and out of touch.

Perhaps they were busily keeping secure a nuclear arsenal?