Ain’t no thumb … new news from Fairfax … Sunrise on planking …

In today's Media Briefs: fresh news from Fairfax ... The Age reveal more than a thumb in naked sport photo ... Sunrise picks up a Crikey yarn and more ...

New news from Fairfax. An email that was sent to all Age staff this morning from Jack Mathhews, CEO of Metro Media:

I would like to update you all on our EBA negotiations with the MEAA which commenced last week.

Yesterday Fairfax presented a comprehensive proposal to the MEAA and House Committee representatives. I have attached a broad outline of key strategic drivers which underpin our proposal as well as an overview of the proposal itself.

Our proposal incorporates a wage proposal, a willingness to negotiate coverage and a commitment to training and consultation. Other areas of the EBA would remain the same as the current EBA which has been in place for the past three years.

The meeting yesterday was productive, and I am hopeful that we will be able to progress these discussions at a reasonable pace. The company has authorised a union report back meeting today from 4 to 4.30pm. I will keep you apprised as bargaining proceeds.

That ain’t no thumb. It’s not just typos that slip through when the subeditors get the boot. In an Age article about naked sport this morning, the accompanying photo showed a little more skin than normal. It didn’t take long before the picture was, um, pulled and replaced by a cropped version… 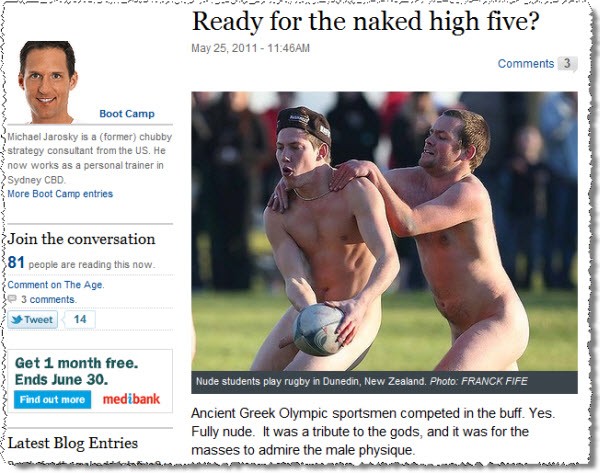 Sunrise picks up a Crikey yarn. This morning’s Sunrise rehashed Crikey’s scoop from yesterday on the South Australian Attorney General’s plan to ban planking, even talking to the “unofficial Australian Planking President Sam Weckert”, who seemed thoroughly unconcerned about a crackdown on his beloved pastime… Front page of the day. US President Barack Obama made a return to his ancestral Irish homeland — a cause for much celebration in Ireland. There was Guinness flowing, and the Irish Independent‘s headline even has “Yes we can” in Gaelic: “Nothing prepared us for what we saw happening across the Arab world this year. One network knew damn well how to report a revolution. Michael Paterniti takes us behind the cameras at Al Jazeera.” — GQ

“Twitter is poised to acquire London-based startup TweetDeck in a $40m (£25m) deal that will make 36-year-old founder Iain Dodsworth a multimillionaire.” — The Guardian.

“TIME’s Battleland blog announced today a new contributor called “Officer X” — a young, gay pilot in the U.S. military who is going to post regularly about the repeal of the Pentagon’s “Don’t Ask, Don’t Tell” policy and offer a first person account of what it is like to be a gay service member.” — Media Bistro

“For the final episode of “The Oprah Winfrey Show” taped Tuesday, the talk show queen appeared alone on her Chicago stage, talking to viewers about what they’ve meant to her during the show’s 25-year run.” — Forbes

So who won that “Spot the Ball” competition?

The scrum is ..aargh.. Even NSW might have a shot aginst these guys!

PS Where is (political) balance these days ? The 7pm Project looks very Boltian in its one sided story telling.

Now the ever lovely Kochie and co are in on it, bad enough their daily dose of talkback turds , now witness Kochie’s hopeless pro Patricks mumblings today , no MUA rep spoken to, just the patricks guy doing his PR best with the biggest bit of puffery from Koch.

Hey, Western Red, Kochie didn’t ignore the union, he invited their participation and they declined the offer.

I know this, because his elaborate explanation alerted my to the coming event, thus enabling me to turn off and to do something useful (make a cup of tea).