I cannot see that it really matters which government gets the extra money from the Western Australian mining industry.

Punishing Western Australia but not too much. I cannot see that it really matters which government gets the extra money from the Western Australian mining industry — the state government by way of an increased royalty rate on iron ore fines or the federal government through its planned mining super profits tax.

To me it’s just another of those silly federal-state relations squabbles that the Commonwealth Grants Commission will sort out in the end by adjusting what it takes out from Canberra’s left hand pocket to put into Perth’s right. The main role for governments state and federal should be to ensure that mining companies pay a fair price for the access they are given to the people’s mineral wealth.

The issue came up during question time in the House of Representatives yesterday when the Minister for Resources, Energy and Tourism, Martin Ferguson, promised that, despite the state’s extra royalties grab, the Commonwealth stood by its commitment to increase infrastructure spending in WA “especially the  Gateway project, which goes to a potential huge improvement in productivity because of the problems around the Western Australia airport not only for the mining industry but for the whole of the Western Australian economy, including the all-important tourism industry.”

On first hearing that answer seemed to be in conflict with previous threats by Julia Gillard that “we will … be adjusting expenditure for Western … Australia to protect the federal budget” but the Prime Minister assured Nationals Leader Warren Truss that it was not. Retribution there will be.

With a Martin Ferguson answer you have to do a bit of verbal decoding to fully understand what he meant by this second part of his answer:

Women’s sport makes page one. Not just once but four times in eight days. Brisbane’s Courier Mail has even made female rugby league players the page one photo previewing tomorrow night’s state or origin game. 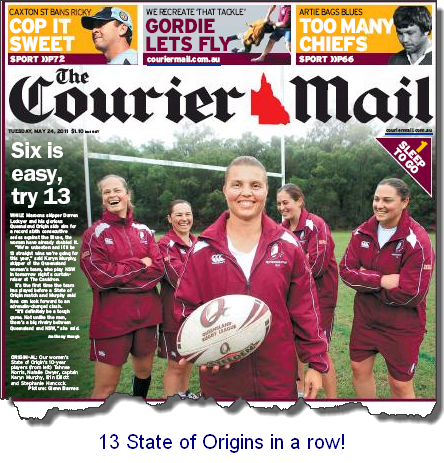 That acknowledgement of 13 victories in a row over New South Wales followed yesterday’s front page celebration of the victory by the Firebirds in the trans Tasman netball competition and Saturday’s preview of that game. The previous Monday it was a group of surf life saving winners not even dressed in the normal bikini fodder of tabloid terrors. All in all it is a commendable effort by the Courier Mail to give some decent coverage to women’s sport.
No votes in opposing plain packaging. Common sense, or rather, electoral self interest, will surely prevail in the end and see the Coalition support legislation imposing plain packaging for cigarettes.
This is not an issue on which even a dedicated smoker and former tobacco industry lobbyist like me would change the way of voting yet there are plenty of anti-smoking zealots who just might if a party opposed the new restriction. For my part I am thinking of going into the business of selling those once fashionable cigarette cases. There was much tut-tutting when a self proclaimed climate skeptic at Berkeley University in the United States back in 2009 decided that it was time to independently test the data that been used to allegedly claim the world was getting warmer.

Why are Ministers dodging talking to the Brisbane Courier-Mail and putting answers in writing? Because the Courier's journos regularly get facts wrong, writes a former QLD government spinner.