Por fin, the Spanish protest unemployment with a touch of fiesta

It's been dubbed the "Spanish Revolution", reminiscent of the workers uprising and social revolution in Spain during the civil war in the 1930s. The sad thing is, most of the thousands filling the streets of Spain in recent days are only wannabe workers.

It’s been dubbed the “Spanish Revolution”, reminiscent of the workers uprising and social revolution in Spain during the civil war in the 1930s. The sad thing is, most of the thousands filling the streets of Spain in recent days to protest against a struggling economy and stagnant government are only wannabe workers, victims of the highest unemployment rate in all of Europe. 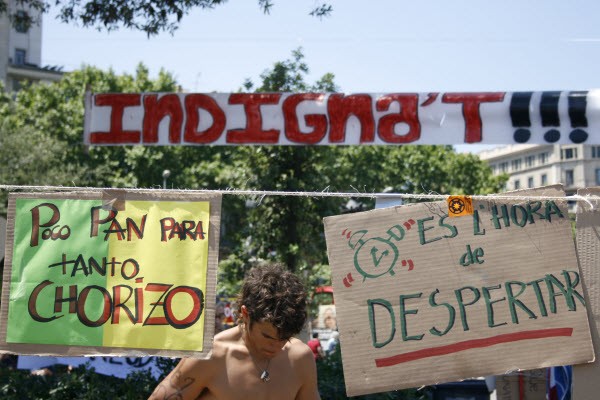 Puerta del Sol, the main town square in Madrid, has been gradually filling all week. It’s an organised affair, with tents offering child care, food and other facilites and more demonstrators coming to the square in the day time to join the movement, and thousands camping out at night. Yesterday 30,000 demonstrators crammed into the Puerta del Sol, defying a government ban on protesting within 24 hours of an election. Tens of thousands of others, in more than 60 cities across the country, came out to demonstrate on the day of regional and local elections across the country. Like everything in Spain, even their political demonstrations have the air of a fiesta: “Everyone is there, from elderly people to young married couples with small children. Clowns are performing and doing activities with the children and people are playing in music concerts,” Sergio, a 24-year-old masters student who attended the protests in Barcelona (and took these photos) told Crikey. But it’s not all fun and games. “It’s a very engaged movement, they are very serious,” said Sergio.

Unemployment sits at 21.3% in Spain, with youth unemployment a whopping 43%. Spain has struggled economically in recent years, with its banks receiving a €90 billion bailout  in 2009. The Spanish housing bubble burst in 2008, leaving citizens paying off mortgages costing far more than their houses are now worth. Allegations of political corruption have plagued Spanish politics in recent years. Spanish politics is a two-party system and voters do not elect who leads the party. And many Spaniards are fed up.

“Above all, this is about indignation,” said Sergio. The movement — often called 15-M, in relation to its start date of May 15 — calls itself apolitical and pleaded with voters to not vote for either of the two major parties at yesterday’s election. The group leading the demonstrations, known as Democracia Real YA! (Real Democracy Now), claims not to be involved with any political party or union.

The governing Socialist Party (PSOE) suffered heavy losses in the regional and local elections yesterday, with the more conservative People’s Party winning 37.5% of the vote and PSOE  getting only 28% with 90% of the vote already counted. The elections were largely seen as a preview for next year’s federal election, where current prime minister Jose Luis Rodrigo Zapatero has already announced that he will not seek a third term.

Sergio and his girlfriend, Sara, are emblematic of this crisis in Spain. Both graduated with degrees from the University of Burgos, Sara in civil engineering, Sergio in communications, yet remain unemployed. They have asked for their surnames to not be used, as employers often Google potential employees and they don’t want to limit their chances of employment even further.

Sergio found some temporary work writing stories for a local paper and news website during his degree and after he graduated in 2009, but it quickly dried up in their small home town of Miranda de Ebro in the north of Spain.

After Sara graduated last year and struggled to find any work locally, they packed up and moved to Barcelona to study masters degrees at the University of Barcelona, in the hope that it would increase their employment prospects (and also give them something to do). Both continue to be fully supported financially by their parents.

While the heart of the current protests lies in Puerta del Sol, Madrid, the movement has filtered out across the country. Sara and Sergio were at the Barcelona protest during much of the weekend. It’s mostly younger people who camp out, but during the day and late into the night, thousands of enthusiastic Spaniards are joining the movement. When asked why he was protesting, Sergio explained: “In my case, it’s because youth unemployment is 43%. We finish our studies and there is no work. Spanish university graduates have to leave Spain and business and the government aren’t protecting these graduates. That’s our situation. The only thing I, and everyone else, can find is internships — that pay nothing, or very little, like four euros per hour — or short-term work. It’s badly compensated work and it’s a half-year contract but it’s the only work there is.”

Sara agreed: “The unemployment level is incredible and we finish our degree and what do you do? You have to go overseas for work, but is there no other solution?”

Both explain that they know many graduates who have left for Germany, France, the United Kingdom and elsewhere in Europe to find work. The German government has asked the Spanish government for help in recruiting engineers to Germany as they are so desperate, but few Spaniards speak German or want to leave their country.

“The more conservative types say get a job, choose a political party and stop being silly. But the more progressive, the middle class, they approve of what’s happening. There are a lot of older people involved in this because of the unemployment levels,” said Sergio.

In Plaza Catalunya, where the main movement camp is set up in Barcelona, people are lively, with everyone doing what they can to help out, says Sara, with volunteers cooking and organising future protests. “On one hand they are indignant, on the other people feel good because everyone is supporting each other. At least, you’re there, you’re doing something,” said Sara.

Much international media is drawing comparisons with the Spanish protests to the recent unrest in the Middle East, but Sergio is quick to point out the differences: “With respect to Egypt and Tunisia and the rest, the fact that it’s a non-violent demonstration is similar. But they are fighting for democracy and we have a democracy. What the protests have in common is the form, a camp set up in the town square, a non-violent protest and above all, using social media to co-ordinate and communicate.”

Sergio explains how Twitter, a social media that has not previously been very popular in Spain, has gained momenteum during the protests, with organisers at the camps asking for food and giving information via their accounts.

The camp in Puerta del Sol has decided to stay there until May 29. Another huge demonstration is planned in cities including Barcelona for June 15. After years of frustration and no work, it seems Spain has realised it has power in numbers, particularly with a presidential election around the corner. “A non-violent protest can gain a lot. People listen,” said Sergio.

Epic hopes for a devalued euro