The Critical Decade report released today by the Climate Commission calls for a "fresh approach" to setting emission reduction targets, in particular by using a global "carbon budget". But what does that mean for Australia?

The Critical Decade report released today by the Climate Commission calls for a “fresh approach” to setting emission reduction targets, in particular by using a global “carbon budget”.

But what does that mean for Australia?  The answer, grounded in peer-reviewed science, is beyond political belief.

The “carbon budget” approach was first outlined in early 2009, and described in  “Humanity’s carbon budget set at one trillion tonnes” and “How The ‘2 Degrees Celsius Target’ Can Be Reached“.

Two peer-reviewed articles asked the question: how many more tonnes of carbon can humans pour into the air until 2050 before a 2-degree temperature increase is the result? A commentary by both sets of authors was published in “nature” as “The exit strategy“.

Now 2-degrees is not a good target. As Crikey outlined in January, NASA climate director James Hansen concludes that at the current temperature rise of just under 1°C, no “cushion” is left to avoid dangerous climate change, and that the Australian government target goals  “… of limiting human-made warming to 2°C and carbon dioxide to 450 parts per million are prescriptions for disaster”.

Indeed, Climate Commission member and author of the  “Critical Decade” report, Will Steffen, is a co-author of perhaps the most significant climate science paper of 2009, “A safe operating space for humanity“ which found a safe boundary for many of the earth’s key systems would be no more than 350 parts per million of carbon dioxide. But that is another story. 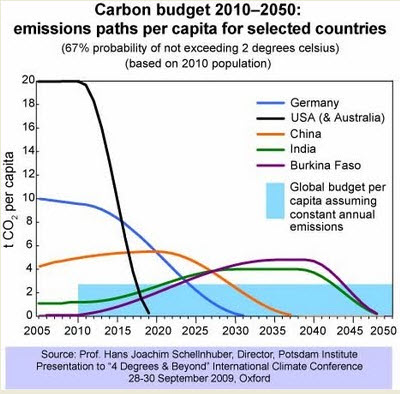 So what does a carbon budget approach mean for Australia? In short, we are in deep carbon deficit heading towards bankruptcy, and at the present rate of emissions, Australia would run out of its carbon budget to 2050 within 5 years.   Here’s how it works:

At a global scale, a quick flick of the calculator will find that if global emissions keep growing at the present rate of 3.5% a year, then the global carbon budget for 2 degrees runs out in 2021. That is, after that time, emissions would need to drop to zero immediately to have a 75% chance of not passing 2 degrees. If global emissions reduce 2% a year from now (something not even vaguely on the table), the carbon budget to 2050 will still run out in 2030 for 2 degrees.   This is the stark science with which the political elite wish to negotiate, at our collective peril.

The alternative is to head towards 3 or 4 degrees of warming, which is where present international commitments are taking us, and a planet fit to support less than a billion people by 2100.

The Climate Commission has bravely put the science of a  global carbon budget on the table.  It now needs to explain the implications for Australia. It is not a 5% reduction by 2020 as the major parties advocate. It is getting to zero emissions in 10 years. That’s the science.

It puts a lie to the view recently expressed by Climate Commission chair Tim Flannery that: “If all major emitters adopt a similar level of effort to our 5% reduction target in 2020 (or better) and continue to decarbonise thereafter, we’ll cap the temperature rise to no more than 2 degrees later this century …”

The commission will easily be caught between the science and politics of climate change. It’s purpose can be best fulfilled by sticking to explaining the science, without political fear or favour.