LinkedIn’s float on the New York Stock Exchange has blown away expectations, delivering the company a valuation of about $US10 billion, writes Charis Palmer.

LinkedIn’s float on the New York Stock Exchange has blown away expectations, with the share price soaring on debut to close at $US94.25 after hitting a high of $US121.97, delivering the company a valuation of about $US10 billion. That means every one of LinkedIn’s 102 million members is valued at about $US90, based on LinkedIn’s market value.

Private-market trading of LinkedIn shares ahead of the IPO gave the company a valuation of about $US3 billion. LinkedIn says roughly one million new members join the site every week, which equals more than one new member a second.

But even with that kind of growth, the company has not yet delivered the stellar revenue of the companies it could be fairly compared with. According to a Reuters report the company has admitted it does not expect to be profitable in 2011 on a US generally accepted accounting principles (GAAP) basis.

In Australia, LinkedIn’s registered member base recently hit 2 million. A spokesperson for LinkedIn refused to comment on how many of those are active, probably because it seems LinkedIn doesn’t actually know.

In February, BNET reported on a detail contained within LinkedIn’s Initial Public Offer document that explains why the business is so focused on its hiring solutions and premium subscriptions products, as opposed to advertising, or what it calls “marketing solutions”.

In reality, LinkedIn is busy growing its hiring solution business, something the local spokesperson was more willing to talk about, telling Technology Spectator LinkedIn now has 21 ASX-listed companies using Hiring Solutions. Hiring Solutions is essentially a job posting and search service that leverages the vast amounts of candidate data held within LinkedIn.

Looking at the chart below, it’s clear LinkedIn has done well at boosting this part of its business in recent years. 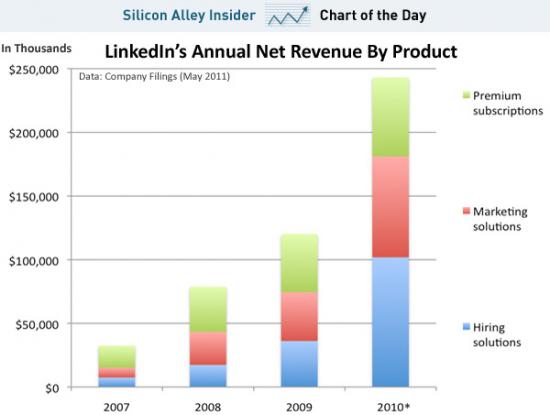 This essentially means LinkedIn is really a recruitment search company and anyone looking to invest in LinkedIn should really be comparing the company with other job sites, and not social networking companies such as Twitter and Facebook.

In the lead up to today’s float, talk was of LinkedIn being part of a social media bubble, compared alongside China’s Renren whose shares soared 29% after floating earlier this month but then dropped back below the initial offer price. Instead investors should be looking at the market cap of firms such as Monster.com, and in Australia, Seek.

The story is a familiar one if you compare Monster.com’s dotcom boom peak of $US150 a share and market valuation of $US8.4 billion in 2000, on revenue of $US1.3 billion. Last year Monster Worldwide posted revenue of $US914 million (nearly four times the revenue of LinkedIn), and the company made a loss $US32.4 million. Monster today has a market cap of $US1.9 billion, nothing like the $8.9 billion driven by tech bubble 1.0 hype.

Closer to home, Seek has a market cap of $2.35 billion. It claims 4.8 million unique browsers a month, valuing each visitor at about $48. In February, Seek posted a record half-year profit of $47.9 million on revenue of $159.5 million. I know where I’d be putting my money.

One area where LinkedIn has managed to impress is the growth it has delivered in members when compared with the total number of staff it employs. As of March 31, LinkedIn had 1288 employees worldwide, and as far as we can tell, less than five in Australia. At $US97 per share, the company’s market value is roughly $US7 million per employee.

Seek by comparison has 400 employees confined to the Asia-Pacific region, which at yesterday’s closing share price of $6.98, makes its market value $5.88 million per employee. Which proves if you can get a network to build your business for you, you have a distinct advantage over more traditional businesses.

*This article was originally published at Technology Spectator

The valuation is overblown beyond description. But those who bought in at the IPO and sold out next day to the sheep that rush in (institutions spending our super I suppose) made good money.

When I joined years ago it seemed like it might be a modestly useful networking/communication tool but I’ll bet there are millions of its so-called base who, like me, never use it anymore. Especially when last time I logged in and tried to send an email to another member, they wanted to charge $10. Or, I could buy a special offer of 20 emails for $100 (something like that, I am not going to go back to verify). This is certainly just a strategy to blackmail the corporates to buy a Premium account which provides a certain number of free emails (“free” email, who would have thought you could sell this). Naturally 99.9% of Premium accounts are paid for by the person’s company not personally.

No doubt there is a role for such a service but not anything like $10 billion value.

Linked in send emails to all users with suggested contacts, so I think more are active that maybe you think there are.

I know, I receive them. But these are simply attempts to generate activity. They do not show that individual LI members are emailing. Of course I don’t really know but then as the author of this article noted, LI do not reveal how much activity there is. Equally I would agree that it need not be like frenetic Facebook activity to be useful to its users.