Keeping an eye on petrol

Petrol is still near its high point but no longer rising steeply and when it comes to this quarter's inflation figure it is the increase that counts.

Keeping an eye on petrol. The inflationary fears that the Reserve Bank may hold centre around the strong growth year in commodity prices with oil being at the forefront.

This chart from the Australian Institute of Petroleum shows the upward trend but the good news is in the levelling out that has occurred since the end of March. Petrol is still near its high point but no longer rising steeply and when it comes to this quarter’s inflation figure it is the increase that counts. 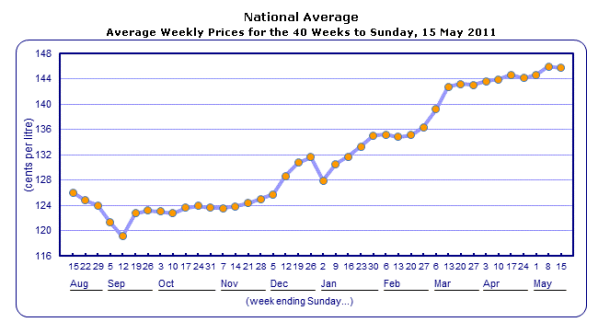 Perhaps even better news is yet to come because crude oil, along with other commodities, in the last couple of weeks has been falling in price. A touch of hypocrisy? The Australian Capital Territory is definitely Labor Party territory. The local government is a Coalition between Labor and the Greens and in Federal elections the left of centre duo get around 65% of the vote.

You would think it was the kind of political environment where support for government schools was strong. And you would be wrong. Figures this week show that the ACT has become the first state or territory in the country where more students attend private secondary schools than public ones.

The future of books. Thanks to Ezra Klein’s Washington Post blog for leading me to this interesting insight into what the book of the near future might look like. Please! Put it in our back yard. It’s a modern equivalent of man-bites-dog! Residents of the Swedish town of Östhammar are 77 percent in favor of hosting a nuclear waste dump. Der Spiegel has the intriguing story of  how the Swedish nuclear industry has approached the task of defeating nimbyism.

The Turnbull strategy. Giving a little helping hand to Julia Gillard by being consistent about his view on what Australia should do to contribute to the world’s efforts to control global warming was natural enough for Malcolm Turnbull. He basically is that rare commodity in politics — an honest man.

While we should not read to much in to his comments this week, they will help remind his Liberal colleagues that he has a different approach to Tony Abbott and that will become relevant if down the track fears about the impact of a carbon tax disappear. If and when the tax actually operates and it is clear that the consequences are not as draconian as Mr Abbott is running around the country suggesting, presumably support for Labor will rise.

I know it’s an “if” but don’t rule out the possibility. Malcolm Turnbull clearly hasn’t

Canberra has passed a historic bill to allow those in the ACT to grow, smoke, and possess small quantities of pot. But it was Labor, not the Greens, who pushed it through.

Labor will have been in power for 19 years by the time the next election rolls around.

Poll Bludger: what Labor, Libs can take from ACT election

Leaving national implications aside, the major parties can both take heart from the gains made at the expense of the Greens in Saturday's ACT election.

re The Turnbull strategy:
Tony Abbott and the rest of his denialists are not expecting to stick around for the consequences of climate change.
They expect to be swept into heaven by The Rapture tomorrow.

Re private schools’ high share of enrolments in the ACT

This is all the more mystifying in view of the generally high quality of ACT public schools.

Gavin – don’t forget that the public service was traditionally a Roman Catholic stronghold. Would be interesting to see the breakdown between Catholic and other private schools.

Zed whatisname (forgettable Liberal leader here in the ACT) reckons part of it is lack of discipline at the public schools. Yep, he’s following the Abbott brand of right-wing populism which goes over like a lead balloon here. Which comes down to at a private school if someone is too much of a problem you can expel them and let the public system handle them. Capitalise your profits and socialise your losses…

Disclaimer – I spent six of the worst years of my life at a snooty Anglican high school in Sydney and still bear the scars. I am delighted at how my step-sons went in the ACT state system.

I understood that while some departments were mainly Catholic – maybe Social Security and Immigration – others were mainly Protestant, such as Attorney Generals and Foreign Affairs.