With exquisite timing, while Malcolm Turnbull was criticising the Coalition's climate policy, Greg Hunt was confirming his warnings about its budget impact.

Is there a more discredited policy on either side of politics at the moment than the Coalition’s “direct action” climate-change policy? The inability of Tony Abbott and Greg Hunt to find any independent experts who take the policy seriously — and the embarrassed responses of experts who’ve been verballed by them — has been the subject of a series of cruel articles in the Fairfax press in recent months.

Last night on the ABC, Malcolm Turnbull, with only a little encouragement from his interlocutor, gave the policy a huge serve that, like his demolition job on the policy in his crossing-the-floor speech at the beginning of 2010, was far more effective than anything Labor has been able to come up with. In particular, Turnbull’s line that the policy was seen as having the virtue of being easily abandoned if climate change turned out not to be real, nailed Tony Abbott’s climate denialism — though of course, there has never been any doubt what  Hunt believes in — he believes in his own career.

But Turnbull’s observation that the policy would “become a very expensive charge on the budget in the years ahead” was very well-timed, because Hunt yesterday casually announced a 30% blow-out in the cost of his own policy.

Speaking to the ABC, Hunt repeatedly said that the Coalition’s policy was based on an average emissions price of $15 a tonne of abated emissions.

Fortunately, we can check that against the actual policy and its costings, released on February 2 last year, which included a breakdown of how the Coalition was going to achieve the bipartisan goal of a 5% reduction in emissions by 2020. The policy contains a table with broad-brush costings of abated emissions. There’s the cheap abatement, from soil magic, said to cost just $8-$10 a tonne (independent experts on biosequestration say that, given the right improvements in measurement, $20-$40 a tonne is a valid estimate, but we’ll leave that for the moment), and the more expensive abatement in areas such as paying coal-fired power stations to reduce their emissions. 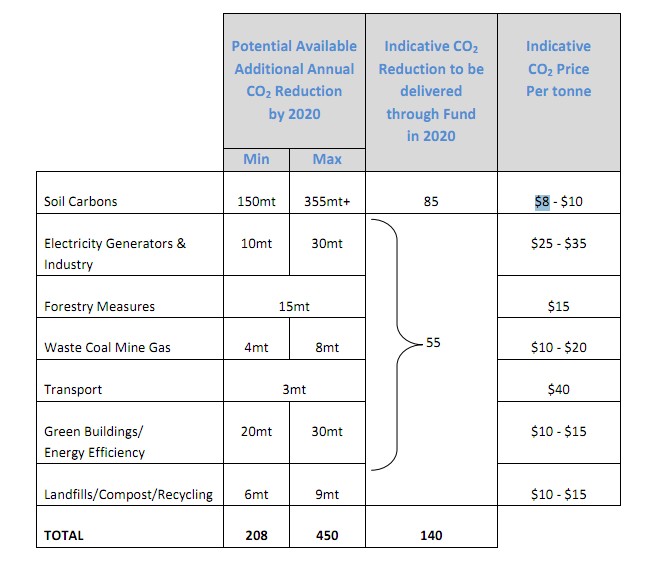 Yesterday, Hunt changed all that and said the average price would be $15 a tonne. That’s slightly more, though still not very, realistic, particularly if you cost his soil magic proposals at the levels independent experts say are plausible. In any event, it’s a blowout of about 30% in his basic costing.

So either the Coalition has to find another $300-400 million a year to achieve the same level of emissions reduction — bearing in mind they’re pretending “Direct Action” can achieve a 5% reduction target — or they’re now shooting for a lower target. Which is it? We asked Hunt’s office, but they’re still not speaking to us.

It’s possible that Hunt’s new $15 figure reflects an acknowledgement that his soil magic numbers are grossly understated. He told Crikey last year that the process for selecting abatement projects would be based on lowest cost, meaning it not necessarily depend as heavily on soil magic as the original policy, which depends on burying carbon for 60% of its carbon reductions. But who knows? It’s time the Coalition stopped messing about with this rubbish and acknowledged Turnbull’s essential point, that at the moment it isn’t interested in doing anything about climate change.

Yes, your last paragraph nails it – what the Coalition needs to do is acknowledge that its real policy is to ignore climate change, do nothing, pretend climate change doesn’t exist and hope it will go away. Then we can have a proper debate.

Call me weird but I feel sorry for Hunt. He’s been talking about emissions trading for a long while, and I suspect doesn’t believe in this current Liberal policy one bit.

just occasionally the Libs do something to admire, and largely it’s either Hockey or Turnbull, this time it’s Turnbull….hopefully Gillard and co can pick this up and get some mileage out of it

Since when does a “non-core promise” have to be taken “seriously” – there’s votes hanging off this?
As for Hunt, he chose this company, and sticks to it!

The last paragraph does nail it, we shouldn’t do anything we can’t do anything about! That big yellow ball in the sky isn’t going anywhere and that is the one thing that determines all life on this beautiful blue ball floating about in this very dangerous universe. We are a speck of dust that can be flicked off the shoulders of mother nature when ever she feels like getting rid of us, what a con job it all is and if anyone listens to that old sourpuss Turnbull then i am convinced you believe in fairies!