In today's Media Briefs: It's all Chinese to The Age ... Front page of the Day ... Strauss-Kahn case sparks debate about French media's deference to power and more ...

It’s all Chinese to The Age. A Crikey reader pointed us to today’s front page story in The Age, in which the term “Chinese speaking” was used multiple times in reference to Foreign Minister Kevin Rudd. Our tipster couldn’t help but draw the conclusion that the recent subeditor issues as Fairfax may have seen The Age drop the ball, meaning that the correct “Mandarin speaking” terminology was not used: 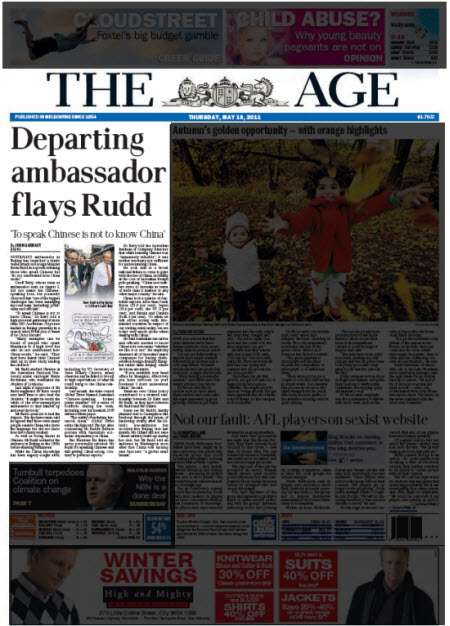 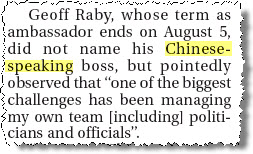 Front page of the day. After 40 or so movies and thousands of timeless catchphrases, the US tabloids were always going to have a field day with Arnold Schwarzenegger’s love child scandal: 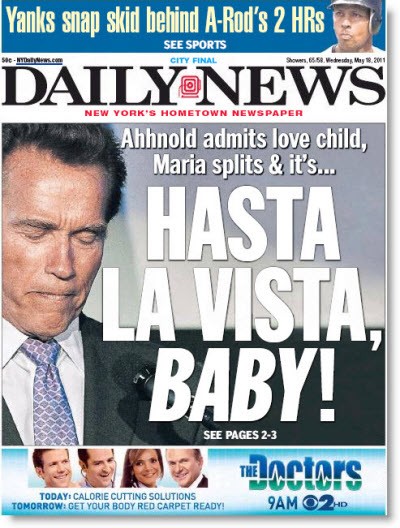 “Since Dominique Strauss-Kahn’s arrest on allegations of s-xual assault, the French media have been under pressure. They are accused, chiefly by the US press, of cowardly observing a “code of silence” over politicians’ private lives; of either burying or failing to properly investigate the Socialist presidential frontrunner’s long-rumoured predatory nature toward women.The debate has consumed the French commentariat.” — The Guardian

“The Libyan government has released four journalists to a Tripoli hotel frequented by Western reporters. Clare Morgana Gillis, a freelance reporter writing for The Atlantic and USA Today, was among the freed journalists.” — The Atlantic

“Social media is being used more and more in newsrooms as a tool for news gathering and verification, according to a new study.” — Journalism.co.uk

“The White House Press Office has refused to give the Boston Herald full access to President Obama’s Boston fund-raiser today, in e-mails objecting to the newspaper’s front page placement of a Mitt Romney op-ed, saying pool reporters are chosen based on whether they cover the news ‘fairly’.” — Boston Herald

“The Twitter feed handler for the Secret Service’s verified account inadvertently tweets a personal post critical of Fox News, promptly deletes it, his employment.” — The Daily What

“New York Times editor Bill Keller argues that new technology also has intellectual, emotional, and even spiritual costs associated with it … and Twitter is part of the problem.” — Mediabistro

Another God bearing “Rupublican” caught by the John Thomas, in his closet door? Is he going to do a Gingrich (another one who campaigns on Christian values – while playing with his own) and marry this one?

I don’t think it’s a subbing error for the Age to call Mandarin “Chinese” . It is the official language of China and is sometimes called “standard Chinese”. “Mandarin”, on the other hand, is a rather dated Western term (a Portuguese version of a Hindi word, in case you were wondering).