Get ready to spend twice as much

The Organisation for Economic Cooperation and Development is predicting that Australia expenditure on long-term care (LTC) for the elderly as a share of GDP is expected to at least double, and could even triple, by 2050.

Get ready to spend twice as much. The Organisation for Economic Cooperation and Development is predicting that Australia expenditure on long-term care (LTC) for the elderly as a share of GDP is expected to at least double, and could even triple, by 2050.

The demand for LTC workers as a share of the working population is set to increase by 140%, over the same period. 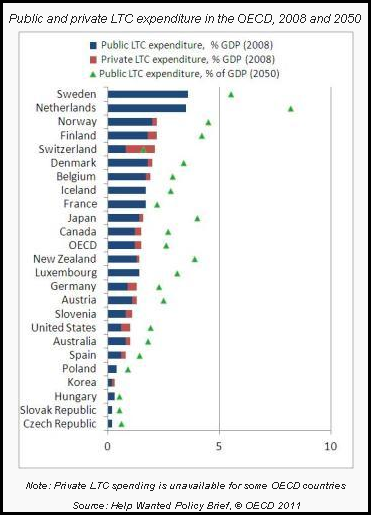 The predictions are contained in a just released report entitled Help Wanted? Providing and Paying for LongTerm Care.

In a section devoted to Australia, the OECD says:

Carers in Australia are 30% more likely to hold a temporary job and have nearly three years shorter working career than non-carers. Measures such as flexible working time can help work-care reconciliation. As in the case of the United Kingdom, the use of flexible working time is found to increase carers’ working hours in Australia. On the other hand, cash benefits to the carer can raise policy trade-offs. While Australia is one of the few countries with a carer allowance, means-tested allowances generate incentives for carers to reduce hours of work (as in the United Kingdom). Low-skilled women are especially at risk.

Further details of the OECD study are on Crikey’s The Stump website.

Sweating on Papua New Guinea. Immigration Minister Chris Bowen should be hoping that Papua New Guinea comes to the party and takes recent boat people arrivals because Malaysia does not appear to be interested in doing so.

A report in this morning’s Malaysian Star newspaper reports Mr Bowen’s counterpart, home affairs minister, Datuk Seri Hishammuddin Hussein, as saying Malaysia will only accept asylum seekers who arrive in Australia after an agreement is finalised. It is hard to disagree with Opposition immigration spokesman Scott Morrison that the Government “hasn’t got an agreement with any country, including Malaysia” and that “as a result we are in some sort of policy twilight zone.”

Shock! Horror! Indonesian jails the same as ours! There are exclusives and then there are stories by Greg Sheridan. This morning comes the so-called news that Indonesian prison guards often corruptly allow in mobile phones and other contraband.

Some of these contraband goods, like rice, cooking oil and sugar, heaven forbid, are even sold by some prisoners to fellow prisoners! And then there are terrorist inmates who have the hide to practice their religion and run the Koranic study sessions and they even preach to their fellow inmates.

What an inditement of the Indonesian prison system.

Taking some of the pressure off. Another little sign this morning that Australia’s economic growth rate might be slower than the consensus view of the forecasters. Japan, still a major export market even if now ranking below China, is technically in recession with the recovery still hampered by the aftermath of earthquake and tsunami.

It was the second straight quarter of contraction with Reuters reporting analysts projecting the economy to shrink again in April-June as supply constraints triggered by the March catastrophe continue to weigh on output and exports.

Razer: I turned 50 under capitalism. It was pretty shit except for the food.

“What an inditement of the Indonesian prison system.”

Never would have happened “under Suharto”?