News Limited has struck back against claims by Bob Brown it is misrepresenting the climate change debate, accusing the Greens leader on its editorial pages of cracking under the pressure of increased media scrutiny.

News Limited has struck back against claims by Bob Brown it is misrepresenting the climate change debate, accusing the Greens leader on its editorial pages of cracking under the pressure of increased media scrutiny.

Senator Brown yesterday criticised the Australian media — in particular News Limited and The Australian — for the way it reports on climate change, labelling News the “hate media” and accusing them of “doing a great disservice to the nation”.

Brown launched the swingeing attack at a press conference in Canberra, after journalists repeatedly pressed him for details about the proposed carbon tax and asylum seekers.

“I think it’s very essential to take that on at the moment because I think the Murdoch media is doing a great disservice to this nation in perhaps the most important debate of the century so far, which is how we tackle climate change,” he told the assembled press pack.

Brown accused some sections of the media of not being balanced because they failed to get “both sides of the story”. Instead, he said, they relied on opinion instead of facts.

“Its not what you would read in other countries around the world and I think that needs taking on,” he said.

In his news report today, James Massola from The Australian said Brown’s onslaught was a “well-worn routine — questioning the questioners” and noted the Senator had been taken on at the press conference by journalists from three other organisations — Fairfax, Channel 10 and The West Australian — not News Limited.

Massola quoted The Australian‘s editor-in-chief Chris Mitchell as saying the paper was “unaware of any complaints from Senator Brown” and would be “happy to talk to him if he has any”:

“I believe we have probably done more to give honest scrutiny to the carbon tax than any other newspaper and, of course, we have long supported a market-based mechanism for dealing with climate change.”

In an editorial published after last year’s federal election, The Australian called for The Greens to be “destroyed at the ballot box”:

“Greens leader Bob Brown has accused The Australian of trying to wreck the alliance between the Greens and Labor. We wear Senator Brown’s criticism with pride. We believe he and his Green colleagues are hypocrites; that they are bad for the nation; and that they should be destroyed at the ballot box.” 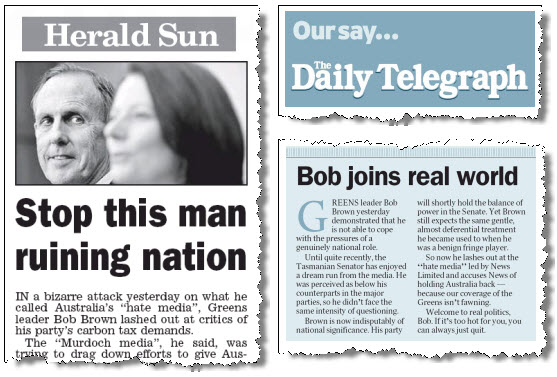 The Hun said it would cop Brown’s “bizzare attack” if that meant the paper could “get at the truth” of Brown’s plans for a carbon tax: “We are against a carbon tax and we believe it is our job to question just how how much you want to tax Australians.”

Sydney sister paper The Daily Telegraph welcomed Brown to the “real world” and said, until recently, he’d received a “dream run from the media”. That was all about to change, the Tele warned: “Welcome to real politics, Bob. If it’s too hot for you, you can always just quit.”

Andrew Bolt on his blog said Brown’s comments amounted to a media “meltdown” and his “obsession” with attacking News Limited was “unnerving”. The Australian‘s Media diarist Caroline Overington noted that Bob Brown had the nerve to slam the press “in French, no less” (emphasis hers).

On its op-ed pages, The Australian‘s Dennis Shanahan said the broadside was evidence the Green’s leader is under pressure:

“For the first time the Australian Greens’ leader is being treated just as he has always wanted to be, as the leader of a mainstream political party. Unfortunately, it’s not quite turning out as he had hoped.”

Hugh Riminton from Channel Ten asked the Greens grandfather figure at the presser yesterday whether his stinging words amounted to a change in tactics, to which the Senator responded in the affirmative:

“I’m being very much on the front foot here because I think the media, with some very good exceptions, can at times lose track of the fact that it’s part of the process of moving Australia into a much more secure future with a more secure lifestyle, economy and job creation prospects.”

One journalist, Fairfax radio reporter Michael Pachi, repeatedly challenged Brown on his views, asking him why he was “obsessed” with attacking News and the “press you don’t like”.

Brown said his words were “all part of the democratic discourse” and the media should “measure up to your own rules”: “The Murdoch press comes out every day and bags out the Greens, why one rule for you and not one for the others?”

Fairfax Radio hosts rushed to Pachi’s defence yesterday and this morning. 3AW talkback tsar Neil Mitchell branded Brown a “twit” and a “dill” for his remarks and said the attack was “proof … we shouldn’t be in Bob Brown’s hands at all”.

Gary Hardgrave from 4BC called Brown “delusional”, while 2UE host Paul Murray said the Greens leader turns every press conference into an opportunity to slander the media.

I don’t always agree with Bob Brown, but this time…

Pure gold Crikey and a thousand thanks to Bob Brown for a masterful performance. 😀

Love how cheerful he is the whole time. Makes it hard to put that on the news and claim he’s ‘whinging’.