In today's Media Briefs: Why journalists like to compare presidents ... Bing to challenge Google with Facebook recommendations ... Front page of the day and more ...

Sophisticated comedy for city dwellers. City viewers loved the show too naughty for the bush last night, with 1.48 million tuning into Nine’s Come Fly With Me, the new comedy from Little Britain drag act Matt Lucas and David Walliams. Regional viewers were denied the airlines spoof after Nine affiliates WIN and NBN pulled the plug on the show. From London, Lucas sympathised…

Front page of the day. IMF chief Dominique Strauss-Kahn, who was arrested in New York on s-x charges, may have even had a small chuckle at today’s New York Post front page… 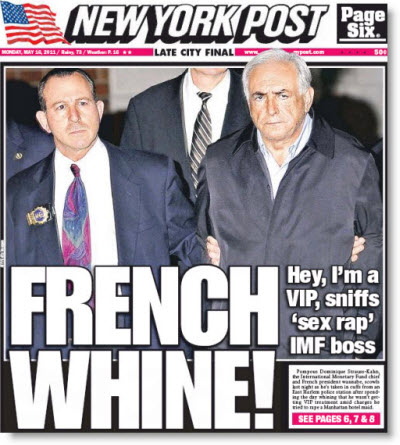 The Department of Corrections. OK, it was bound to happen at one of the “big” newspapers, but at least the San Francisco Chronicle had the gumption to correct the record… 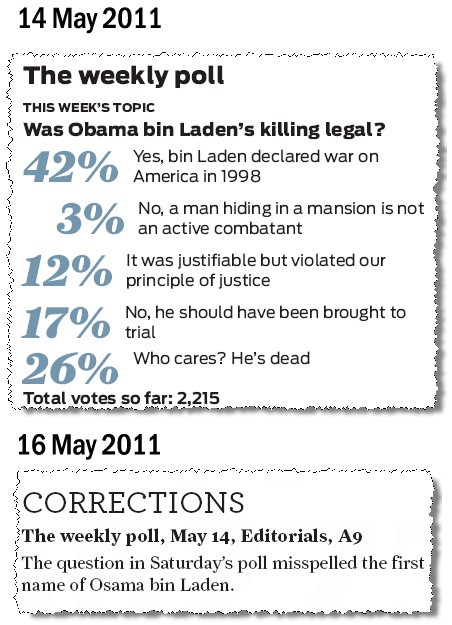 Fairfax radio stations may be sold

“Fairfax Media is actively considering a sale of its broadcasting division as it looks to offload non-core assets and restore some much-needed market support in the newspaper, digital and radio businesses.” — The Australian

“New York Times Public Editor Arthur Brisbane deserves a lot of credit today for his piece “The Other Torture Debate”, in which he notes the mealy-mouthed way his own paper has treated the issue over the years and makes a very worthy suggestion regarding a future editorial path.” — The Huffington Post

“Is it natural for political writers to compare and contrast because so many were history majors? Thus, when pontificating, instinct leads them to predecessors.” — Columbia Journalism Review

“YouTube has launched a memorial channel for journalists who have been killed while reporting from around the world.” — Journalism.co.uk

Microsoft Corp’s Bing search engine is increasing its emphasis on the recommendations shared within Facebook’s online social network to give people something they can’t find on Google’s dominant search engine.” — Washington Post

“California SB 242, proposed by Sen. Ellen Corbett, would force social networks like Facebook to allow parents access to their child’s account(s) and, more importantly, force all privacy settings to their maximum level by default. Parents can request that images or text be removed from any social network page “upon request … within 48 hours upon his or her request.” —  TechCrunch

“The online video component of the ‘hump’ campaign for Thirsty Camel Bottleshops, launched in March by Melbourne agency Twenty20, has been banned by the Advertising Standards Bureau.” — mUmBRELLA

DSK at liberty poses a headache for his party

The unintended consequence of the US Facebook bill will be that kids will set up 2 facebooks, one for parental consumption, and one for their friends…